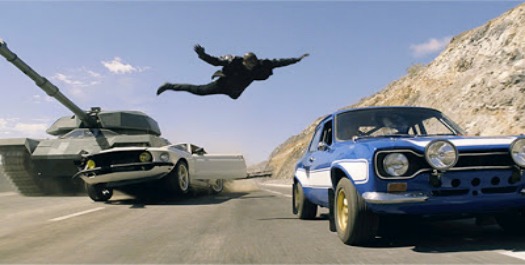 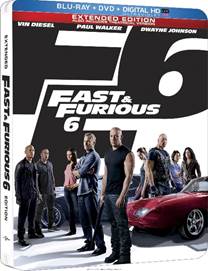 Universal City, California, October 3, 2013— The latest blistering addition to one of Hollywood’s greatest action-movie franchises, Fast & Furious 6, roars into the holiday season as the unbeatable choice for “Highest-Octane action yet!” (Meriah Doty, Yahoo!) A transcontinental caper that reunites fan-favorite stars from the blockbuster franchise’s earlier films, Fast & Furious 6 earned almost $800 million at the box office worldwide. Fast & Furious 6 comes to Blu-ray™ Combo Pack including Blu-ray™, DVD & Digital HD with UltraViolet™ and On Demand on December 10, 2013, from Universal Studios Home Entertainment. The film will also be available on Digital November 19, 2013. Found exclusively only on the Blu-ray™ is a special Extended version with even more intense action, as well as over an hour of exclusive behind-the-scenes bonus features, only available for a limited time in collectible Steel Book packaging

The Blu-ray™ Combo Pack includes a Blu-ray™, DVD and Digital HD with UltraViolet.
· Blu-ray™ disc unleashes the power of your HDTV and is the best way to watch movies at home, featuring 6x the picture resolution of DVD, exclusive extras and theater-quality surround sound.
· DVD offers the flexibility and convenience of playing movies in more places, both at home and away.
· DIGITAL HD with UltraViolet lets fans watch movies anywhere on their favorite devices. Users can instantly stream or download movies to watch on iPad®, iPhone®, Android™, smart TVs, connected Blu-ray playres, game consoles and more.
Bonus Features Exclusively on Blu-rayTM

Extended Version of the Film

Planes, Tanks and Automobiles
· The London Chase—Gives viewers a front-row seat for the filming of a sprawling car chase through the streets of one of the world’s most historic—and congested—cities. Examines how director Justin Lin and his team pulled off car-flipping mayhem on a breathtaking scale.
• Highway Heist: The Convoy Attack—A first-hand account of a meticulously planned and executed action sequence, as Dominic’s gang saves the day in this high-velocity battle featuring a tank, an armored cargo carrier and a harpoon.
• The Antonov Takedown—An exploration of what went into creating Fast & Furious 6’s spectacular finale sequence, featuring the world’s largest plane, including first- and second-unit filming, special effects, visual effects, car rigging, stunt drivers, green-screen shooting and more.
• Dom and Letty Race Again – Vin Diesel and Michelle Rodriguez reunite on screen.

Gearhead’s Delight—From the shop to the test track, to the set and back again, a look at the latest hot cars showcased in Fast & Furious 6. Narrated by car lover Paul Walker, this piece features Dom’s latest Charger, Brian’s Nissan Skyline GTR, the BMW M5’s, the Alfa Romeo and the classic cars from the film’s car-auction scene.

The FLIP Car—Provides an inside look at the Fast franchise’s newest mind-blowing vehicle—the pivoting FLIP car. Dennis McCarthy, the film’s picture car coordinator, will take us through the coolest parts of this truly astonishing vehicle, and the destruction it leaves in its wake.

Bonus Features on Blu-rayTM and DVD
· Deleted Scenes
The Making of Fast & Furious 6
· The Fastest of Them All—Chronicles the epic saga of the Fast films from chapters three through six. Justin Lin and his team reveal how they brought new energy to the franchise, creating a dynamic multi-movie story arc.
· Reuniting the Team—Explores the characters (and actors) that make up the Fast family, with a focus on founding partners Dom and Brian (and Vin and Paul).
· Letty’s Return—Heralded by a crowd-pleasing cliffhanger in Fast Five, Michelle Rodriguez (“Letty”) makes a dramatic return in the sixth installment. This short feature explores how the creative team engineered her resurrection.
· The Mastermind and The Mole—Viewers meet Fast “newbies” Luke Evans (“Shaw”) and Gina Carano (“Riley”) as they share their experience joining the cast of Fast & Furious 6 and how their characters fit into the new plot.

On the Set with Vin—Vin Diesel talks through a stunt he is about to perform and then rides his hot rod through an explosion, coming out unscathed.

SYNOPSIS
Vin Diesel, Paul Walker, Dwayne Johnson and Michelle Rodriguez lead a cast of returning all-stars as the global blockbuster franchise built on speed delivers the biggest adrenaline rush yet in this explosive extended version. Hobbs (Johnson) has been tracking an organization of lethally skilled drivers, whose mastermind (Luke Evans) is aided by the love Dom (Diesel) thought was dead, Letty (Rodriguez). The only way to stop the criminal mercenaries from stealing a top secret weapon is to outmatch them at street level, so Hobbs asks for the help of Dom and his elite team. Payment for the ultimate chase? Full pardons for all of them and a chance to make their families whole again.