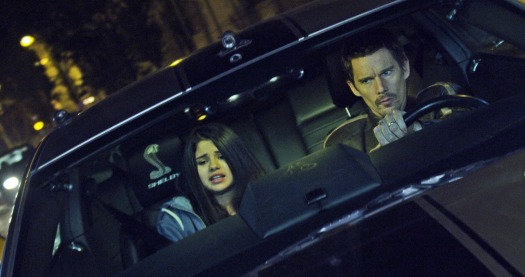 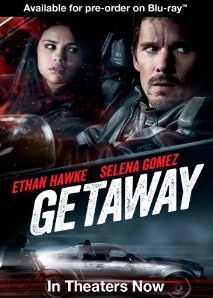 “A hell of a fun ride!”
– Dave Trumbore, COLLIDER

EXPERIENCE THE THRILL OF THE CHASE WHEN
Getaway
ARRIVES ONTO BLU-RAYÔ , DVD and DIGITAL HD ON NOVEMBER 26 FROM
WARNER BROS. HOME ENTERTAINMENT

Blu-ray and DVD include exhilarating behind-the-scenes content and interviews with the cast and crew!

Burbank, CA, October 2, 2013– Experience the gritty, heart-pounding action thriller “Getaway” when it arrives onto Blu-ray, DVD and Digital HD on November 26 from Warner Bros. Home Entertainment. Starring Academy Award® nominee Ethan Hawke and Selena Gomez, “Getaway” is the story of a former race car driver who is pitted against the clock in a desperate, high-speed attempt to save the life of his kidnapped wife.

Former race car driver Brent Magna (Hawke) is pitted against the clock. Desperately trying to save the life of his kidnapped wife, Brent commandeers a custom Ford Shelby GT500 Super Snake, taking it and its unwitting owner (Gomez) on a high-speed race against time, at the command of the mysterious villain holding his wife hostage.

On November 26, “Getaway” will be available for download in HD or standard definition from online retailers including but not limited to iTunes, Xbox, PlayStation, Amazon, Vudu,CinemaNow and more….

The film will also be available digitally in High Definition (HD) VOD and Standard Definition (SD) VOD from cable and satellite providers, and on select gaming consoles and broadband customers including Amazon, iTunes, etc.

*UltraViolet allows you to collect, watch and share movies and TV shows in a whole new way. Available with the purchase of specially marked Blu-ray discs, DVDs and Digital Downloads, UltraViolet lets you create a digital collection of movies and TV shows. Services such as Flixster and VUDU allow you to instantly stream and download UltraViolet content across a wide range of devices including computers and compatible tablets, smartphones, game consoles, Internet-connected TVs and Blu-ray players. Restrictions and limitations apply. Go to ultraviolet.flixster.com/info for details. For more information on compatible devices go to wb.com/ultravioletdevices.