Confession: I avoided the YACHT ROCK Internet show for years because — without even giving it a chance — I assumed that it was a bunch of young jagoffs waving irony around like a child that had found their dad’s gun. THE A.V. CLUB’s Katie Rife convinced me otherwise, because of my love of radio-ready rock and forgotten pop hits. I gave their podcast, BEYOND YACHT ROCK, a shot, and have been a loyal listener ever since. The show is filled with a refreshing amount of sincerity from a group of guys who absolutely love music and have certainly come up with some interesting ways of listening to it.

Each week on BEYOND YACHT ROCK, JD Ryznar, David B Lyons, “Hollywood” Steve Huey, and Hunter Stair step off the boat in order to create an arbitrary genre with names like “Divorcecore” (Baby Boomer artists writing songs about divorce and loss of faith), “Sultry Hits,” which are best described as a the aural equivalent of a 1980’s Michelob commercial, and “Sex Me Ups,” where the female singer appears to want to have relations with the listener. Whoever is in the captain’s chair that week curates a top ten list that the guys countdown and engage in lively discussion, featuring “fun facts” and plenty of shit-talking about over the course of an hour. BEYOND YACHT ROCK has become one of my favorite podcasts to listen to in the car. 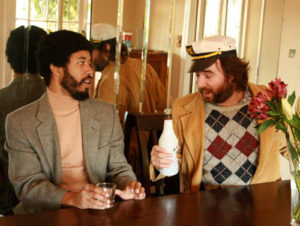 Back in May, Hunter Stair took the lead on a very DAILY GRINDHOUSE-centric episode, “Giallo Shots.” Stair delves into the history of Italian progressive rock, which he dubs “Proghetti,” hoping that it will become “the kindred spirit of ‘Kraut Rock.’” Described as a subset of proghetti that comes from Italian horror films from the ‘70s and ‘80s, admittedly playing loosey-goosey with the definition of giallo. The love of the genre splits the team in two, with Stair and “Hollywood” Steve treating the music with respect, and J.D. and Lyons acting a fool throughout the show. The episode somehow features more horrible Italian accents than SATURDAY NIGHT MOVE SLEEPOVERS’ take on DEEP RED. 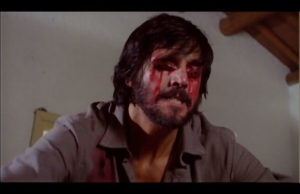 The episode is an enjoyable listen for the casual fan of giallo and the more hardcore enthusiast, as long as you’re not too precious about things. The BEYOND YACHT ROCK team is having a lot of fun on this one, but the knowledge runs deep, featuring music from “The Three Mothers” trilogy, CANNIBAL HOLOCAUST, ABSURD, DEMONS, STAGE FRIGHT, and even TENTACLES.

BEYOND YACHT ROCK is part of the FERAL AUDIO NETWORK.