While DC’s cinematic output has been a mixed bag, with some fans considering them to be the absolute worst of the big budget superhero trend, their animated division has been putting out some quality straight-to-DVD movies. If the trailer for BATMAN: RETURN OF THE CAPED CRUSADERS is any indication, it looks like it might be their most fun and ambitious release yet. 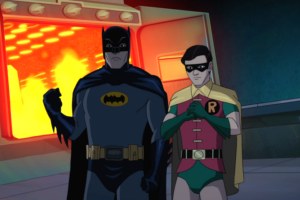 According to I09, the new Bat-movie movie goes to back to the Caped Crusaders’ television roots, and looks to promise a lot of goofy, nonsensical fun, in the vein of the classic BATMAN ’66 series. Original cast members Burt Ward, Julie Newmar, and Adam West will reprise their classic Bat-roles from the show. The trailer showcases the Dynamic Duo caught in a ridiculous trap, recapturing the campy fun that made the original BATMAN television series such a good time, and lets us viewers know that aside from Catwoman, Batman & Robin will be facing off against rogues-gallery mainstays the Joker, the Riddler, and the Penguin. While it’s a shame Burgess, Frank, and Cesar aren’t around to lend their voices to them, you can be fairly certain WB will find suitable replacements who will pay tribute to the memorable portrayals. 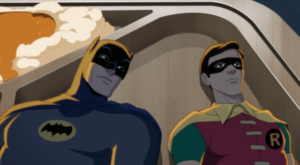 This is very exciting for a number of people who have been longing for a lighter take on the Caped Crusader, the last bit of fun the Dark Knight got to have was in Cartoon Network’s woefully overlooked series BATMAN: THE BRAVE AND THE BOLD, which seemed to take a lot of inspiration from the ’66 series, albeit with a touch of modern-day serious Batman.

Here’s hoping we see some of that classic onomatopoeia during the fight scenes! 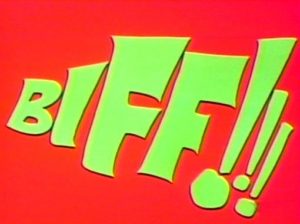