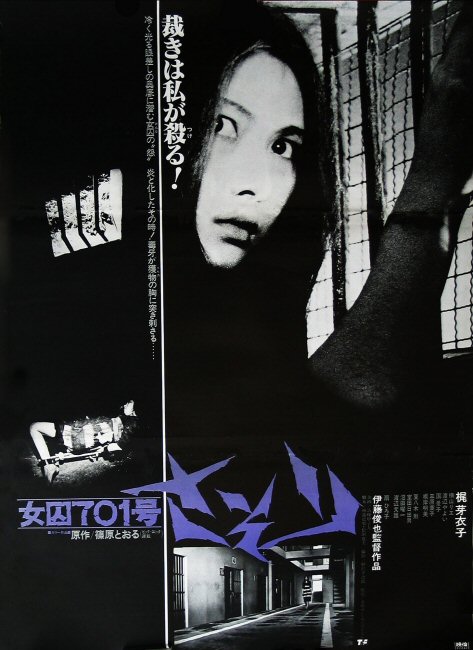 CLICK THE POSTER TO BUY THE DVD FROM AMAZON.COM

Before she was twelve miles of bad road with a blade in the LADY SNOWBLOOD films, Meiko Kaji was taking the torture train in the FEMALE PRISONER films starting with the first in the four film series (not counting the spin-offs), FEMALE PRISONER 701: SCORPION (1972).

Meiko Kaji is Nami, a prison escapee who, along with her friend Yukiko, are being chased by the boys in blue. The two chicks are eventually caught and taken to a maximum-security facility where they are tortured Nikkatsu style. Nami eventually launches a wicked campaign of vengeance as the Scorpion in an attempt to make the wrong things right and bring her own brand of brutality to those that crossed her. I am leaving a lot out but trust me, it’s best to go in blind, this thing packs an epic punch of kink.

Meiko Kaji is once again the silent type in this film. She has little dialogue so she relies on subtle movements and muted ferocity to bring her character to life.  The rest of the cast is filled out by Fumio Watanabe, Yumiko Katayama, Yoko Mihara, Rie Yokoyama, Yayoi Watanabe, Hideo Murota and Shinzo Hotta. This picture was directed by Shunya Ito (as was the sequel) who was a Toei contractor for most of his career. He made his debut with this film but eventually went on to direct some very heavy dramatic material, even beating out Akira Kurisawa’s RAN for the nomination of Best Foreign Film at the 1985 Academy Awards with a film called GRAY SUNSET. FEMALE PRISONER 701: SCORPION is filled with shots that range from hypnotic to hyper-violent, all are done with a level of competency you would expect from a veteran director.

This is Meiko Kaji’s film though. You could make the case for her ALLEY CAT ROCK films, or LADY SNOWBLOOD films (which rank as my personal favorite in her filmography next to the Ginchô wataridori films), but the FEMALE SCORPION 701 series is by far her most popular. This film set a standard, an expectation that WIP films could in fact be this good, few achieved this level but goddamn it’s fun to watch them try.

IF YOU’VE GOT TO FIGHT… FIGHT DIRTY,
THE ANGRY CHIBA