I fucking love when we get a press release from Raro Video; you know something cool is coming down the pike, probably something violent, and always something unique. Today, it’s the Fernando Di Leo classic MADNESS, which he also wrote. This is one of Di Leo’s best films so it’s nice to see this get the Raro treatment. Here’s the skinny on the release: 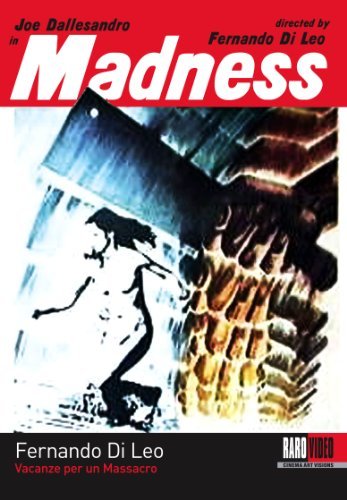 FERNANDO DI LEO’S MADNESS DVD release on AUGUST 14, 2012. The film stars Joe Dallesandro, better known as the “Little Joe” mentioned in Lou Reed’s hit 1972 song “Walk on the Wild Side.” Dallesandro is considered by many to be the most famous male sex symbol of American underground films of the 20th Century having starred in Flesh, Trash and Heat among many others. MADNESS is one of his rarely seen Italian starring roles. A photograph taken by Andy Warhol of Dallesandro’s crotch bulge encased in a tight-fitting pair of jeans is featured on the cover of the Rolling Stone’s 1971 album Sticky Fingers. Fernando Di Leo is the master of garish, intricately plotted, ultra-violent stories about pimps and petty gangsters and he perfects the genre with an uncanny accuracy making him an inspiration to Quentin Tarantino among many others. RaroVideo will release a second edition of the highly successful FERNANDO DI LEO CRIME COLLECTION this December.

MADNESS (1980) From the writer of Caliber 9 and The Italian Connection comes MADNESS starring a story about how a violent criminal, Joe Brezzi (Joe Dallesandro) breaks out of prison and, having stolen a car and killed two people in the process, makes his way to a remote country cottage. Hidden beneath its flooring is the substantial proceeds from a robbery which Joe took part in several years previously, but before he can retrieve the loot a vehicle pulls up outside. Womanizer Sergio has travelled up to his weekend retreat to do some hunting, joining him are his trusting wife Liliana and her flirty sister Paola who has also come along for a break from city life. The escaped convict flees the cottage and quietly observes the sexual tension between Sergio and Paolo, which Liliana is completely oblivious to. Joe bides his time and waits until the next morning when Sergio leaves to go hunting and Liliana takes the car to get some supplies from town. With only Paola in the cottage, he makes his move… RELEASE DATE: AUGUST 14, 2012