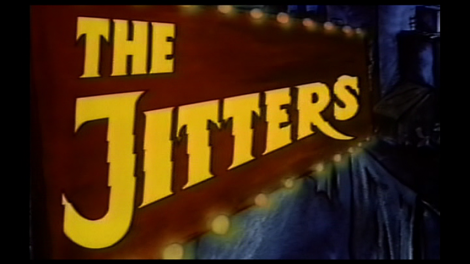 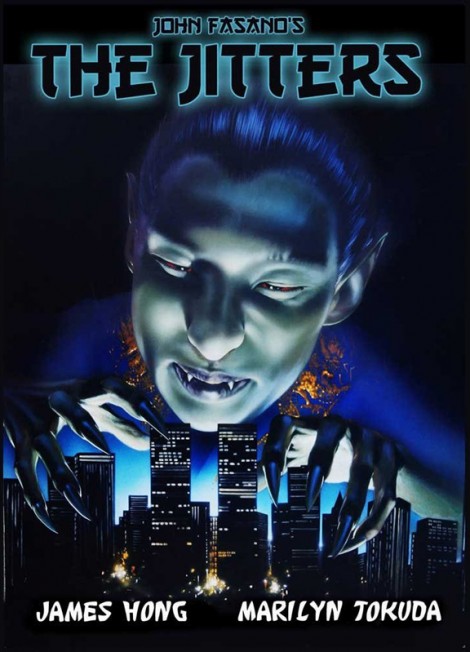 Director and occasional actor John Fasano is best known to genre fans for his two ‘80s horror flicks ROCK’N’ROLL NIGHTMARE and BLACK ROSES, delving, respectively, into the awesomeness and dangerousness of metal music. While those two titles have received a fair share of renewed attention from their DVD releases from Synapse, THE JITTERS, made on the heels of the pair and the final film Fasano would direct for over a decade, has been relished to obscurity, long unavailable since its release on Prism Home Video in 1989.
It’s not THAT surprising that THE JITTERS has remained relatively unknown. The other two films are easily marketable to cult audiences do their rock-heavy content – hell, you could probably sell hundreds of copies of Don Edmunds’ awful TERROR ON TOUR with the right box art – and they both have pre-built reputations thanks to frequent airings on the USA Network in the time. I don’t recall THE JITTERS getting much in the way of cable airplay, and it’s easy to see why – rock music in a horror film is easy to sell, a Canadian-lensed Chinese hopping vampire movie probably isn’t. 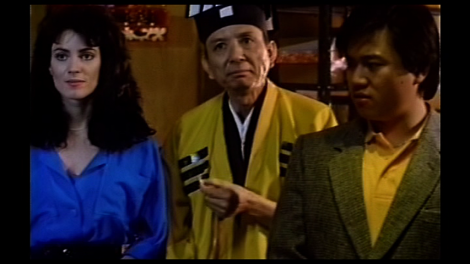 While embraced by Chinese audiences most notably in the long-running MR. VAMPIRE series and Sammo Hung’s ENCOUNTERS OF THE SPOOKY KIND, the hopping vampire mythology has never really been embraced by American audiences, despite attempts to allude to it in the likes of THE GOLDEN CHILD and John Carpenter’s BIG TROUBLE IN LITTLE CHINA. THE JITTERS may be the first completely North American-made embracing of the genre, though the Godfrey Ho-directed ROBO VAMPIRE was shot in the U.S. in 1987 and may predate it, and it embraces it fully, with all of the unrepentant goofiness intact. Unfortunately, the film doesn’t have an inclination to leave it at that, and ends up a strange mesh of comedy and horror that doesn’t really manage to be either.
The first thing you notice about THE JITTERS is the credits. Not just because they’re nicely made, backed by colorful drawings depicting grimy-yet-alluring alleyways, but because they go on forever. It’s a full three minutes before you finally get to the film, and coupled with another five minutes of end credits, you’re left with 71 minutes of actual film in an already-brief 79 minute running time. If there were killer puppets involved, I’d swear Charles Band was involved. 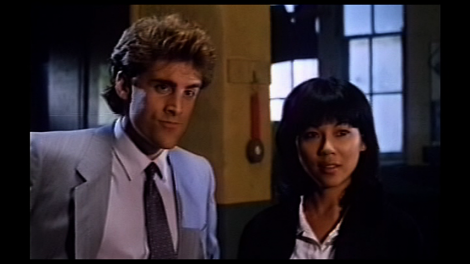 Thankfully, once things actually start to happen, they move pretty quickly. Alice (Marilyn Tokuda) works at her Uncle Frank’s wonky miscellany store in Toronto’s Chinatown selling whatever the hell random assortment of things these stores sell. One evening, Uncle Frank is harassed by a gang of toughs – or at least the film tries to make them into toughs, as the group of shaggy guys in their mid-20s reads less like “street gang” and more like “the creative team for a new Image comic,” a fact that one member’s Batman T-shirt doesn’t help countering. The gang tosses Frank out the front window, and Alice and her yuppie boyfriend Michael (Sal Viviano) show up just in time for the Frank to cough out some dying breaths and for the gang to escape with the contents of the till.
Michael tries to talk Alice into quitting the store and joining him in yuppie power coupledom, but she’s determined to carry on her uncle’s work of selling useless trinkets to easily impressed tourists. Little do they realize, however, that Uncle Frank has become a “kyonshi,” or a hopping vampire, due to his violent and unresolved demise. When the same punks make their way to the store again, in search of Uncle Frank’s hidden stash of money, the place becomes a bouncy house of horrors as Frank bounds in and makes short shrift of the gang, tossing one member through the window that had clearly just been repaired during his funeral. 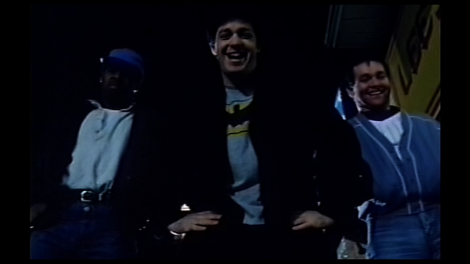 Arriving just in time before Uncle Frank sinks his fangs into his niece is a group of Buddhists, led by character vet James Hong, who attach a prayer scroll to Frank’s head, incapacitating him. The group takes our heroine and boyfriend back to their place, where they explain what the hell is going on and introduce them to all of the vampires they have in their roster, leading to zany shenanigans when Caucasian skeptic Michael scoffingly removes a prayer scroll.
The rest of the film takes the required twists and turns, as the gang, including a token girl member played by future “Rescue Me” star Andrea Roth and a token black guy who doesn’t seem to mind the confederate flag in the gang’s hideout and somehow manages to be the dumbest member of an already questionably intelligent group, gets more mad and demanding and the vampires get more hopping, leading to a silly climax involving hopping, fireworks, and mirrors. 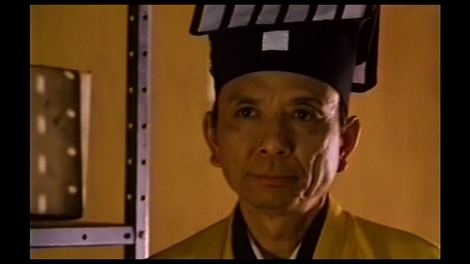 It’s all pretty dumb, and the tone of the film veers wildly, switching from earnest seriousness to goofy antics within seconds. For his part, Hong seems to be having a ball, joking that with Chinese vampires, “one hour after he bites you, he wants you again!” and at one point singing a bit of Bob Dylan. The rest of the acting is unconvincing, though it’s mostly because the gang is horribly miscast and not threatening, and it’s difficult to lend credibility to dialogue like “I’m terrified beyond the capacity for rational thought!”
THE JITTERS is a really odd duck of a movie, and while it doesn’t really work as a coherent film, there is something of a sense to someone who genuinely loves making movies behind the camera. There are a few nice little moments, such as a couple of little kids playing ninjas that reads as a clever take on the appropriation of other cultures when you realize the outfits and “weapons” are the possessions of the Caucasian boy rather than the Asian girl. A couple of Howard Hawks references in the finale bring home the point that a good time was had, even if the resulting film is a mess. 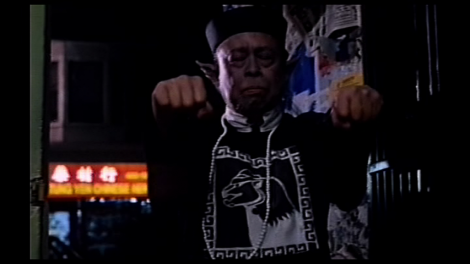 John Fasano admits as much on the commentary, where he’s joined by Tokuda and Retromedia head Fred Olen Ray who acts as a bit of a moderator, calling the film “an odd mix of well-executed stuff and complete crap.” It’s a fair assessment, especially as the film does sport some great make-up and a fine monster at the end which, as Fasano mentions, was made by Steve Wang and also used in Wang’s KUNG-FU RASCALS. The commentary is never dull, and Fasano talks openly about the sound issues (they were limited on funds for post-production and had to make due with substandard sound effects) and trades Prism Video horror stories with Ray, whose EVIL TOONS was released through the label.
Those on the commentary claim that the film has never looked better, and while this is probably true, it’s still a darkly lit film given a video transfer, a fact made obvious from a minor tracking glitch at 13:04. Thankfully, what lighting is on display is very colorful, and Fasano clearly wanted to give the film a more garish, cartoonish look than what comes across on the transfer, though the 1.85:1 anamorphic presentation helps the film get viewed with a more accurate presentation than it had previously received. Fasano also mentions that they’d wanted to make it like a Coen Brothers project, and they did succeed in a way, as THE JITTERS almost resembles CRIMEWAVE, the oddball Coen/Sam Raimi project that nobody wants to talk about. 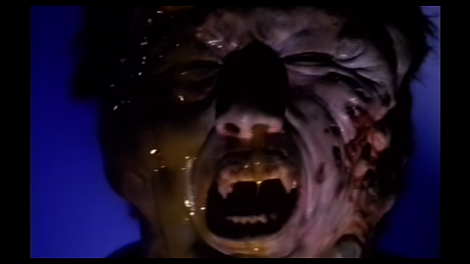 Like CRIMEWAVE, THE JITTERS is undoubtedly a mess of a movie, but it’s not a dull one, and there’s no point during the brief running time where you won’t be entertained – even if that entertainment comes from staring in wide-eyed fascination at the awkwardness on display. It’s great that such an oddity has found its way to DVD in a solid presentation, and I’d recommend it to anyone with a love for late-‘80s horror oddities, especially if they’ve got a curiosity as to a Canadian take on Chinese mythology. Two festival trailers for the film are included, along with trailers to other Retromedia releases. 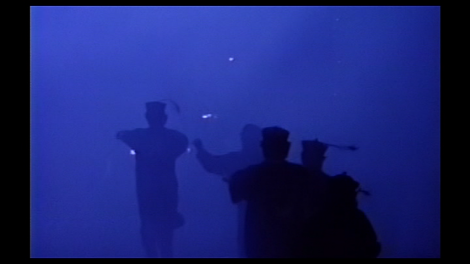