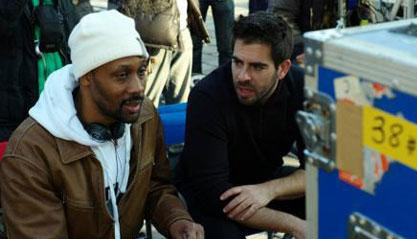 There is a whole lotta kung-fu that’s going to be kicking the shit outta your eyeballs on October 26th when RZA’s directorial debut THE MAN WITH IRON FISTS punches its way into the multiplexes. Fresh from a RZA Twitter post we have the first official look from the flick. It’s cool, bloody, and legit as hell.

Dig it? Well, this Thursday you’re going to dig the trailer. We’ll let you know as soon as it drops. THE MAN WITH IRON FISTS stars Russell Crowe, David Batista, Byron Mann, Rick Yune, Pam Grier, Lucy Liu, and RZA. It follows a blacksmith who makes weapons for a small village and has to defend himself and his fellow villagers (see: kick an ungodly amount of ass).