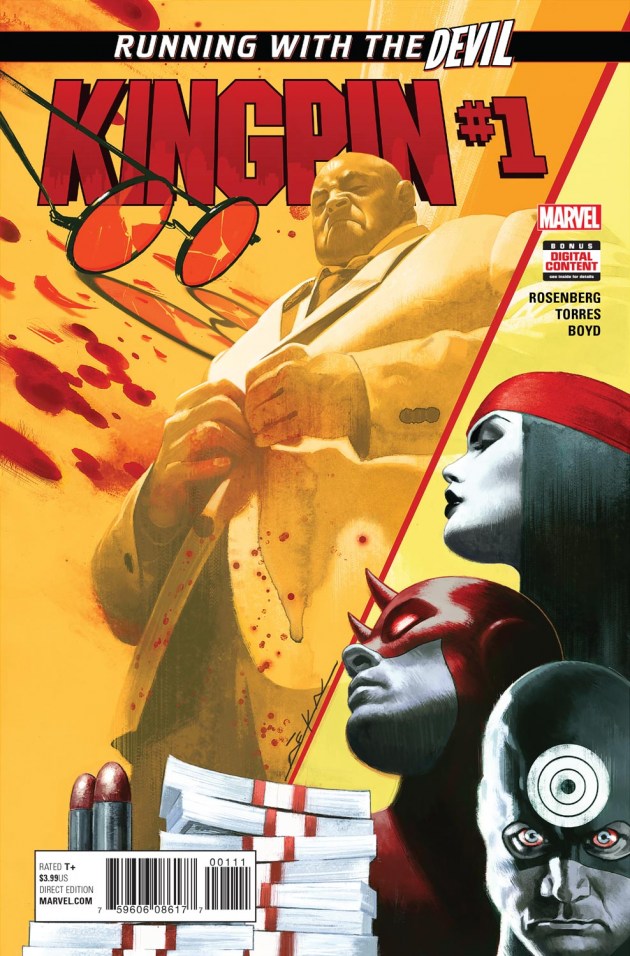 After giving Bullseye #1 a richly-deserved rough time of it in my review last week, I was leaning pretty heavily towards giving the rest of Marvel’s “Running With The Devil” titles a pass, but some nagging little voice in my head told me that Kingpin would probably be worth at least an initial $3.99 investment. Okay, fair enough, Matthew Rosenberg’s earlier Civil War II: Kingpin series was generally savaged by critics (to the point where I stayed away), but I chalk that up to the fact that all “event” tie-ins are garbage weighed down by a shit-ton of editorial mandates — surely free of these constraints, the writer behind 4 Kids Walk Into A Bank and We Can Never Go Home can give us a decent crime story, don’tcha think?

Jeff Dekal’s cover doesn’t necessarily inspire a ton of confidence — he’s been absolutely killing it over on Hulk, but his composition on this one seems a bit curious, to say the least, especially considering that Daredevil, Elektra, and Bullseye don’t feature in this book at all (apart from a cameo by Matt Murdock in his civilian guise), and it seems to me that if you’re gonna include superfluous characters in order to drive up sales, it might be best if one of them doesn’t look like he’s hopped-up on cheap bathtub crank. But who knows? Maybe I’m just old-fashioned — and besides, as with prospective romantic partners, it’s what’s inside that counts, right? 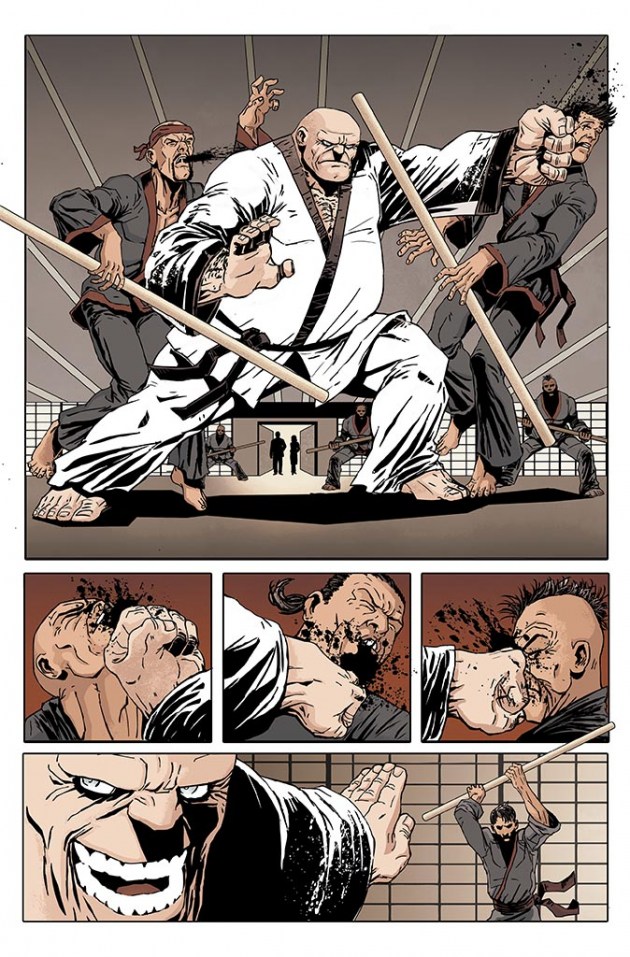 Fortunately for us all, Kingpin #1 grabs you immediately on page one and doesn’t let go. Rosenberg’s characterization of Wilson Fisk is definitely “in line” with Vincent D’Onofrio’s portrayal of him on the Daredevil Netflix series — frightening, physically and psychologically imposing, ultimately unknowable — but with a crucial twist : his motives this time out appear to be far more personal and therefore more potentially dangerous. Yes, he seems determined to save “his” city and to employ his customary morally-ambiguous (to put it kindly) methods while doing so, but he knows that he’s got some serious image rehab to do first, and to that end he’s selected down-on-her-luck journalist Sarah Dewey to ghost-write his (auto?)biography. Dewey is a fascinating and fully-fleshed out character who functions as both an eminently relatable audience stand-in and an immersive figure in her own right at the same time: her trepidation at “getting close” to such a dangerous figure mirrors ours, but her personal problems (divorce and custody issues, 12-stepping) are very much her own, and this comic ends up being every bit as much hers at it is the title-holder’s. She’s our “eyes and ears,” sure (and perhaps our conscience?) — but that doesn’t mean she can’t pull “double duty” and be very much herself while she’s acting in that capacity. I don’t know how many issues this series is slated to run, but I’m already hoping that Marvel finds a worthy spot for her once it’s over. 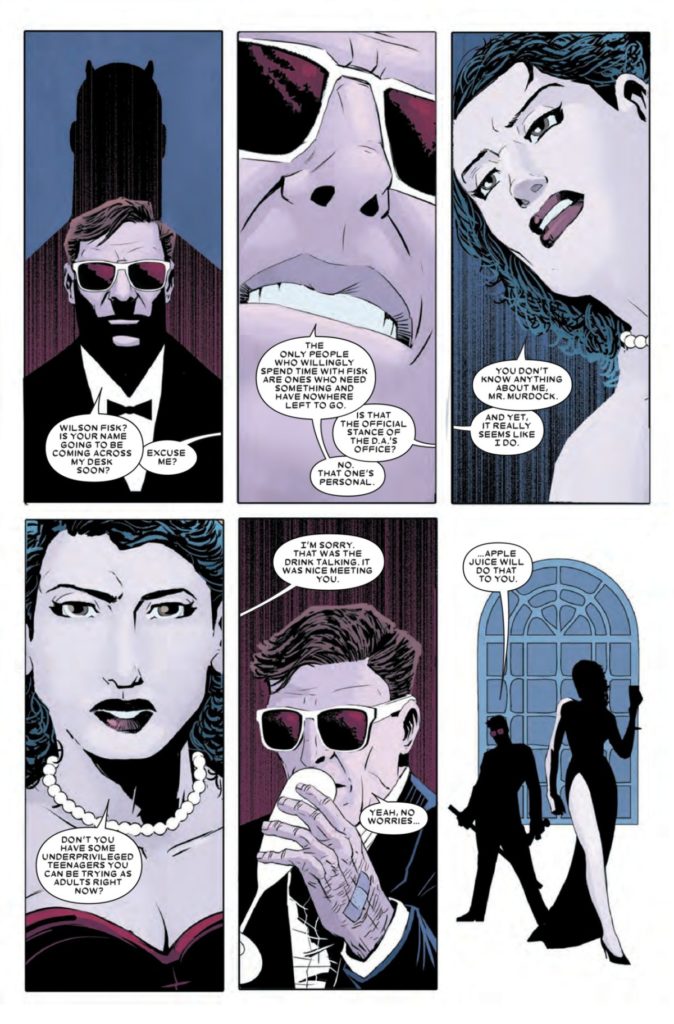 But let’s hope this doesn’t end too darn soon — because not only does this book read well, it looks absolutely gorgeous. Artist Ben Torres borrows a bit from Frank Miller and Tim Sale here and there, it’s true, but he’s got a distinctive “medium-heavy” line all his own and, together with colorist extraordinaire Jordan Boyd, navigates the borderlands between noir and everyday urban not-quite-grime with a fluid ease that’s enough to make lesser talents downright jealous. A truly successful Kingpin book can probably only look one way, and guess what? This is it. 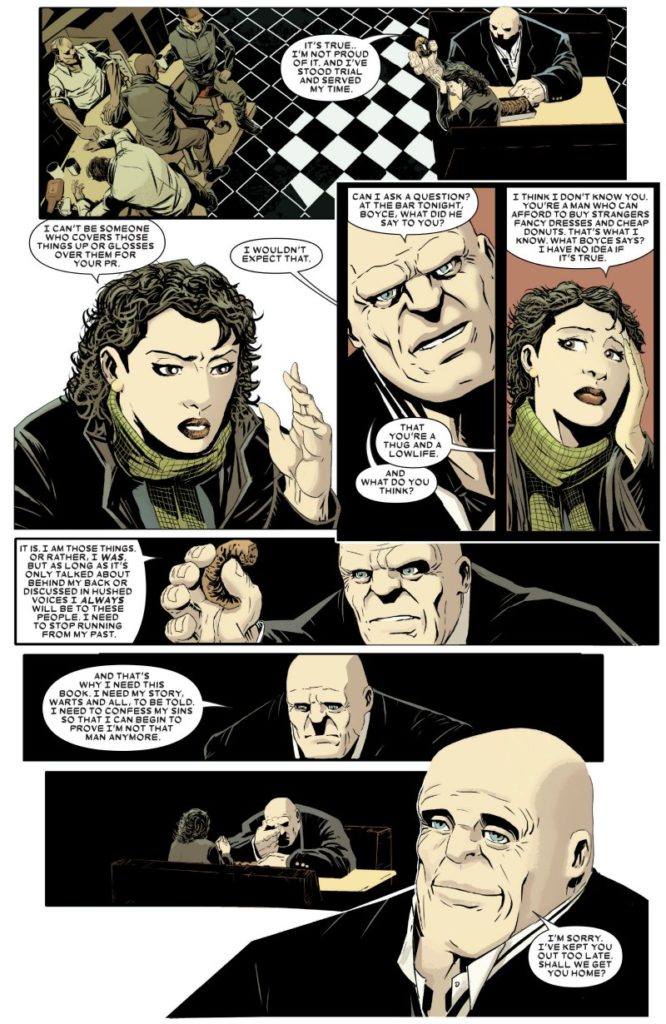 Have I convinced you yet? If not, then I guess I’m just not doing my job well enough. Or maybe spot-on characterization, sparkling dialogue, superb illustration, and pitch-perfect colors all working in concert to accentuate a slowly-encroaching sense of dread and unease just isn’t your particular cup of tea. That’s entirely possible — but even if that’s the (unlikely) case, I’m still willing bet you just about anything that this issue’s simple-but-jaw-dropping cliffhanger will leave you wanting more.

So, yeah — I was all kinds of impressed by Kingpin #1. Give it a chance I’m confident you will be, as well.