Is the weather outside frightful?
Do you find horror and terror delightful?
Are you a shut-in with no place to go?
Here are five horror movies that feature lots of snow! 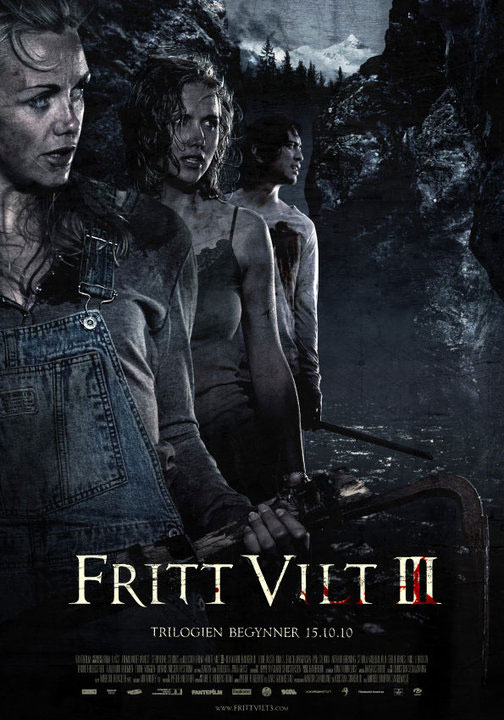 While it’s no great shakes in the plot department (it’s your typical young adults get stranded and stalked by a hulking killer; the kind of film that saturated the gluttonous direct to video market in the 2000’s), the original COLD PREY makes up for any plot deficiencies with excellent atmosphere (an abandoned hotel in the snowcapped mountains is a great location for a horror film), tight direction by Roar Uthaug, unberable tension and characters that broke apart from their predestined tropes to create realistic, fleshed out people. The sequel released a few years later moves the action to a dimly lit hospital, a la 1981’s HALLOWEEN II and just like that film, takes place immediately after the events of the first, with the hulking killer dispatching the unfortunate victims (the hospital workers, cops, the survivor from the first film) without losing any of the scary edge, tension and sharp direction despite changing directors for the sequel. One particular scary setpiece involves a dark hallway with flickering lights that creates a sense of dread, even considering that we’ve seen the same type of scene in many horror movies. And returning character Jannicke gets a level up in baddassery going from the Laurie Strode type final girl of the first film, to a Ripley-lite type in this underrated sequel. 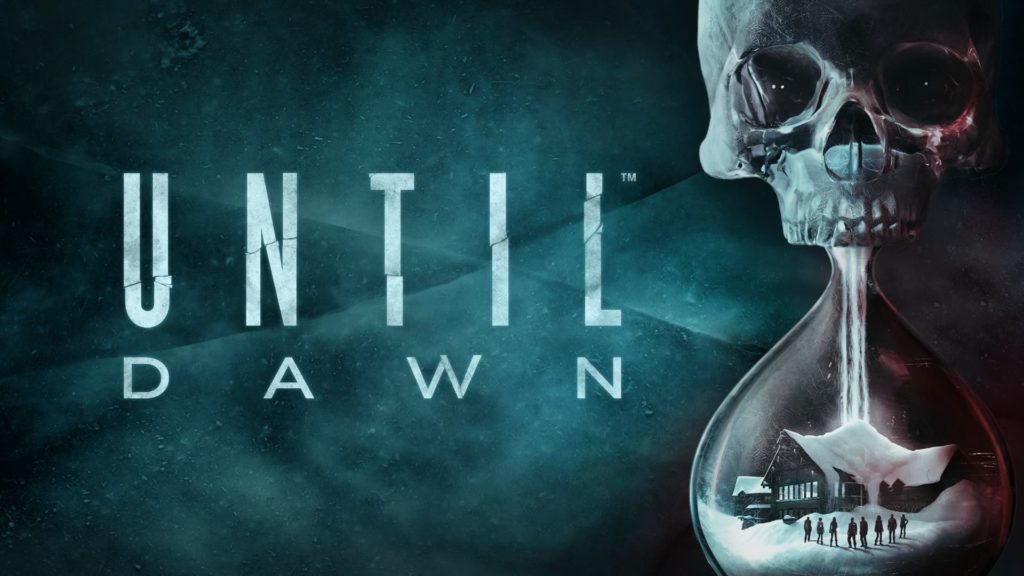 This is a bit of a cheat, because UNTIL DAWN isn’t really a horror movie, but it’s cinematic enough to consider it an interactive movie of sorts. It really can be chalked up to more of a “walking simulator,” but it’s still an intensely fun video game nonetheless. The game’s DNA is firmly wired into the Butterfly Effect aspect, where any single, small decision you make can lead to dire consequences down the road. And I made some dumb decisions that led to the characters getting killed, and when they die, it’s for good. There are no restarts. The game was written by Larry Fessenden and Graham Reznick and like many of their Glass Eye Pix productions (keeping with tradition, Larry Fessenden dies horribly), it’s focused more on atmosphere and scares, (one particular moment had a character walking through the snow, their flashlight beam aiming ahead into the darkness, the subtle score tingling your spine – it felt petrifying). The game takes its sweet time to get the gore allowing you to get to know these characters, who start out as unlikable enough before slowly becoming someone you genuinely want to survive. Even when it dips out of traditional slasher movie storytelling and into more supernatural overtones, it never loses its mojo and ends as a scary snowbound tale. Before UNTIL DAWN came out, I don’t think there was a traditional slasher movie game. Sure there was survival horror prior to this, but this game allowed you to feel the weight of your choices as insignificant as they may be, which most slasher movies never once let you feel. 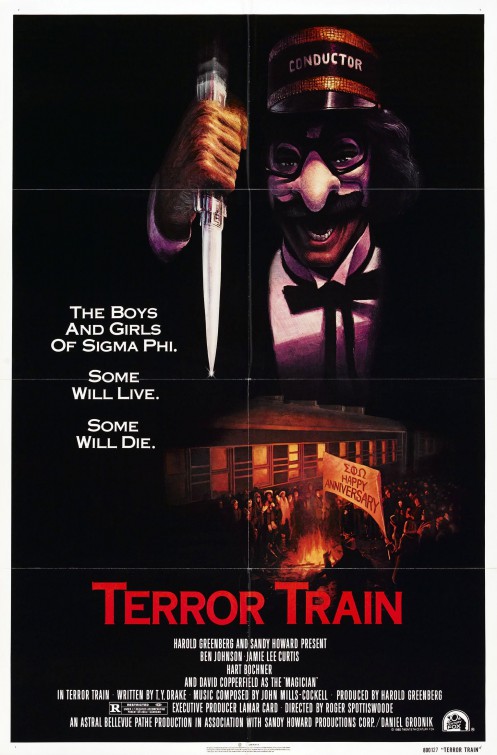 Hailing from our beautiful neighbors to the north, TERROR TRAIN is already a different kind of slasher in many ways: it takes place on a train as it traverses the snowy mountains instead of college dorms or random forests, there’s less emphasis on gore than most of the slashers that had already come before it (I know there’s blood in the murder in the bathroom but the one murder that always squicked me out was the prankster’s death in which his stabbed, still living body is rolled on to the tracks to be run over by the train once it set off on its journey. Also, the killer wears mutiple costumes throughtout instead of a particularly identifiable one a la Michael Myers (though most fans of the film would argue that the killer’s most identifiable costume, and poster is the “ticket-taker Gene Shalit costume,” I feel the lizard costume is much creepier in my opinion). Despite her rapidly ascending role as 1980s scream queen, Jamie Lee Curtis isn’t even top-billed; rather it’s legendary actor Ben Johnson as the sort-of hero/train conductor, starting the trend of getting prestige actors into slasher movies (think Glenn Ford in HAPPY BIRTHDAY TO ME). The scariest scene in the film is when Doc (our head prankster) is alone in his train cabin, as it takes it sweet time leading to the climax, the suspense choking the viewer out. TERROR TRAIN is also not a “whodunit” like most slashers of the era, more of a “where-are-they” because the identity of the killer is certainly Kenny Hampson, the kid who has the inciting slasher movie freakout at the beginning of the movie (eagle-eye viewers can enjoy seeing him as the magician’s assistant throughout the movie) so it becomes a guessing game when we wait to see if the killer has switched costumes and is setting out to kill the next character. Kenny’s strange freakout might be the only time their inciting traumatic incident leads to their inevitable demise. 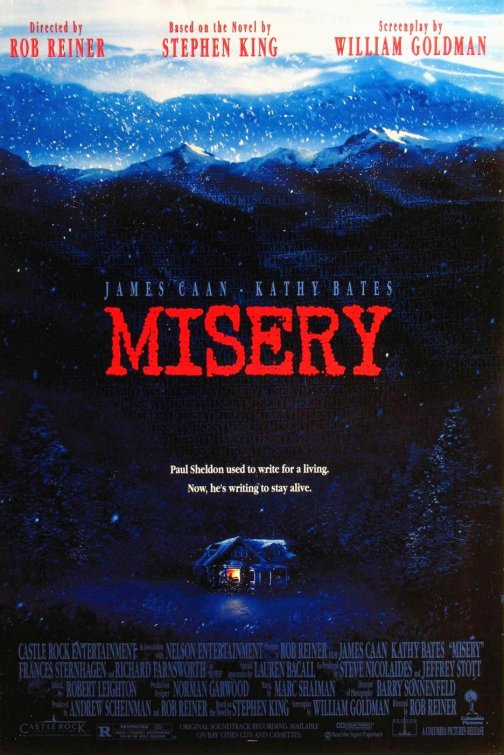 Rob Reiner’s career masterwork, Misery is a claustrophobic tightening noose, a film that’s essentially a staged play (there actually is a play starring Bruce Willis and Mama Loomis) with two actors performing some tightrope work that earned Kathy Bates a well DESERVED Oscar win for a horror movie. I also think James Caan does some phenomenal work working against type here as the belittled Paul Sheldon. The additions to the movie by screenwriter William Goldman enhance Stephen King’s work and actually work within the context of the piece. Of course, you’d have to have a sheriff investigating the famous missing author, because it helps to open up the movie a little bit and dilute the tension a SLIGHT bit, but it doesn’t dilute the impact of King’s prose and still better, creates suspense because Buster isn’t a character in the novel and therefore he could die at any moment. And the hobbling, my god, it’s much worse in the film because all the components of editing and sound effects work together to create a scene that makes you bite off all your nails. And yeah, he gets his feet chopped off, but to me violence is blunt and quick. Pain is eternal. Though if they were to remake this film (it’s still pretty culaturally relevant: See the Scream Factory Blu-Ray release), they would do wonders to retain the nightmarish ending of Annie attacking Paul in his hotel with a chainsaw. God, it’s frightening stuff. 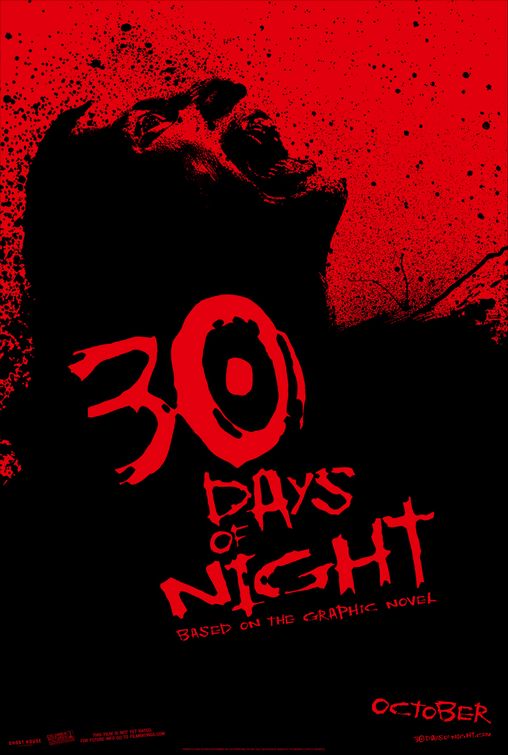 Unlike MISERY, I’ve never actually read the source material graphic novel by Steve Niles, but I did enjoy the film version of 30 DAYS OF NIGHT purely as a concept, maybe a little more than its execution. Don’t get me wrong, the film is fine enough on its own merits, but when you have a first-rate concept of ravenous vampires descending on an Alaskan town during its thirty days of continuous night, they could’ve gone grander with the whole thing, rather than the ultimate execution which amounts to a stage play with a hell of a bigger budget, essentially Hiding and Freezing: the Movie. Again, don’t get me wrong – the film is perfect for watching in the deep throes of winter (I saw it opening weekend in the coldest theatre in Texas), the film is directed and acted well enough, and god bless us, the vampires are scary (DANNY HUSTON!), but the true conceit of the whole piece feels compromised, when it could’ve been scarier than it turned out to be. 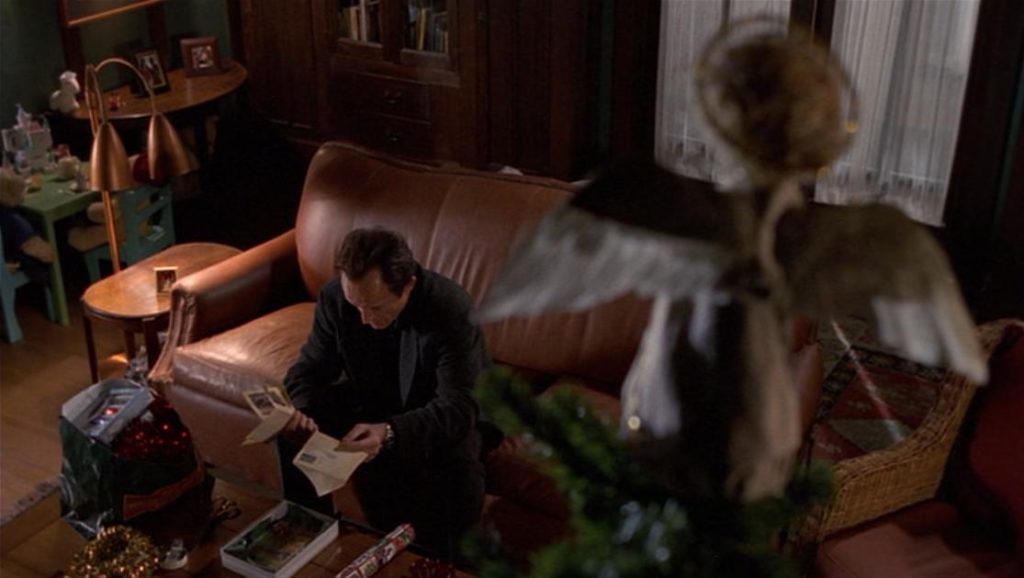 BONUS: Millennium:”Midnight of the Century” (1997)

I love Millennium a whole lot, perhaps moreso than any of the greatest season of The X-Files, even though the tone of the show ESPECIALLY in Season One was oppressively grim. I mean, Christ, there’s a lot of serial killing going on in Frank Black’s life. But once Chris Carter handed the reins over to Glen Morgan and James Wong, the tone shifted away from the darkness to show us the light beyond the black. Episodes had more serialization to them, supernatural elements started to show up in more episodes than not and the whole conceit of the show began to cohere. We finally understood what the Millennium Group actually meant. The whole show felt lighter as well, giving us Lance Henriksen at his career best, getting to cut loose and talk about Squirrel Nut Zippers and act as goofy as possible in the Jose Chung sequel episode ‘Doomsday Defense.’ So it makes they’d follow up their brilliant Halloween episode ‘The Curse of Frank Black’ with ‘Midnight of the Century,’ a thoughtful and poetic episode that focuses on the ghosts of our past, our present and our future all centered around a Christmastime in the 40’s and in the 90’s. It’s a quiet hour of television in which no one is killed, though there is an impactful death. Instead, we talk of ghosts and angels and the fruitlessness of gift giving (Frank buying his daughter a Lost World: Jurassic Park Giga Pet will never not be funny). The episode is a meditation on the future, and focusing on the moments in between the moments. A thunderous cry to slow time down and enjoy the good, to speed up the bad and to dwell on the mistakes so that we may always try to fix them. It’s quite touching and the perfect Christmas episode for a show that often showed us the horror of life.  If anything, this episode gave us the gift of Lance Henriksen discussing whether Billy from Silent Night, Deadly Night was really a serial killer or a spree killer.