As far back as I can remember, I have always been a horror fan. I vividly recall growing up in Tampa, and watching Creature Feature every Saturday afternoon at 2pm on WTOG Channel 44. My family bonded together as horror host Dr. Paul Bearer cracked everyone up with his silly puns and scary jokes. In the beginning, it was the old Universal Classic monster movies and the rich blood-drenched Hammer horror movies. My older sister went on a date to see, at that time, a little-known horror movie called FRIDAY THE 13th, she was never the same afterwards — and her date was a perfect gentleman. Soon, I would cast aside my boyish love of monsters movies and embrace slasher flicks, cannibal movies, and zombie cinema. Nothing could satisfy my craving for horror, so at age six, a family friend gave me his hardcover horror film books after I repeatedly begged him for them. Any given Saturday, you would find me in my room, with a fan blowing cool air in my face, as I looked at those delightful dreadful stills for hours and hours: anything to stay inside and escape the oppressive Florida heat. So after almost a lifetime of studying horror movies, from reading books and watching countless movies from TV to VHS to DVD to Blu-ray, here are my favorite horror movie books that I feel stand above the rest. This is just a list, and no ranking is implied. 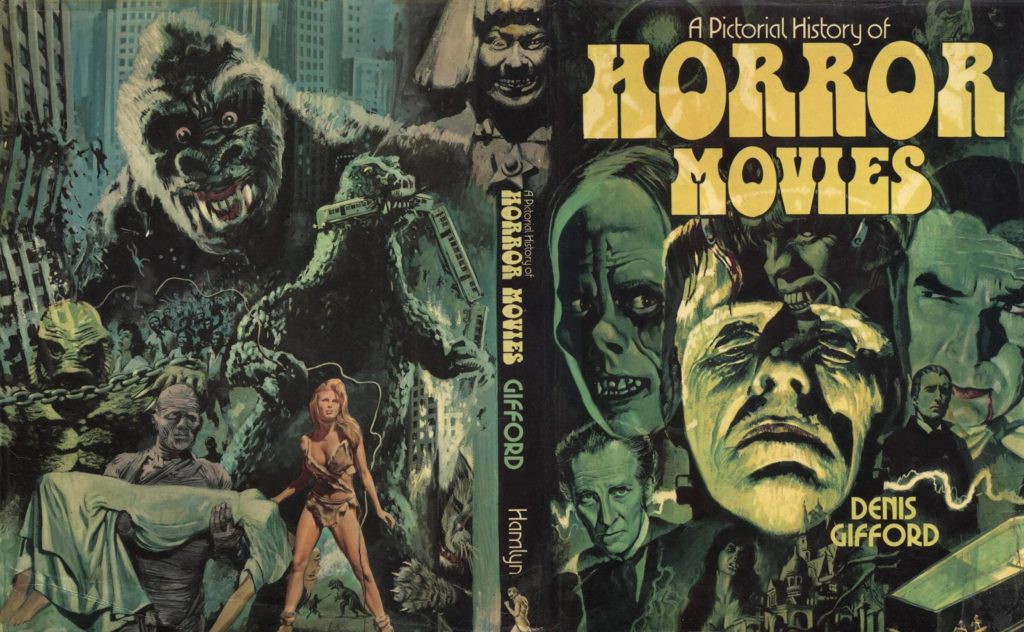 1.)    A Pictorial History of Horror Movies by Denis Gifford – This was my main reference, out of all the other horror books I was given. It traces the early days of horror, from the shorts of Georges Melies to the groundbreaking makeup and acting of Lon Chaney, to the Universal monster movies, and also to Hammer Horror. I was looking at this book before I could even read. I eagerly learned to read in kindergarten and first grade mainly to read the text. This book will always be near and dear to my heart due to my early childhood memories. 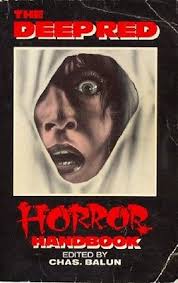 2.)    Deep Red Horror Handbook by Chas Balun – These are a collection of articles from Chas Balun’s spectacular fanzine called Deep Red. Balun is the horror critic who greatly influenced my own opinions of extreme horror throughout the 1980s. This was when I gave up on nice and safe kiddie monster movies and became a gorehound. If Chas Balun said a movie is good, then you would get your ass down to your local video store and hunt it down. He knew splatter flicks better than most other writers at that time. I first read his excellent reviews in Fangoria and their spinoff mag, Gorezone. Every serious horror fan needs this book. 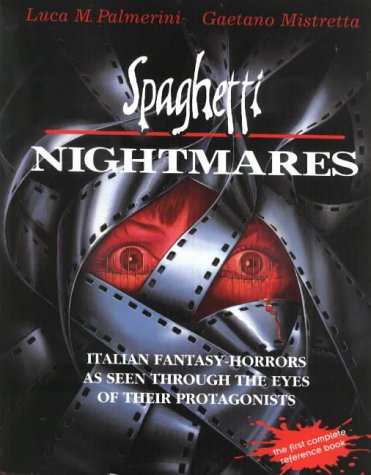 3.)    Spaghetti Nightmares by Luca Palmerini – An indispensable guide to the gory world of Italian horror and giallo movies. Most fans will know the three most famous names, Bava, Argento, and Fulci: however, there are a wealth of talented filmmakers and craft people who are just as scary, creative, and shocking. Lacking the cold hard cash of Hollywood, the Italian FX masters can make something look brilliant with so much less to work with. This book is packed with amazing interviews that tell so many stories about movies I have always loved like THE GATES OF HELL, Michele Soavi’s STAGE FRIGHT, TORSO, and the infamous CANNIBAL HOLOCAUST. No true gore-monger can neglect a look at this book. I learned a lot about movies I never heard of before and was subsequently forced to seek out like SHOCK — I’m so glad I found a copy on DVD. 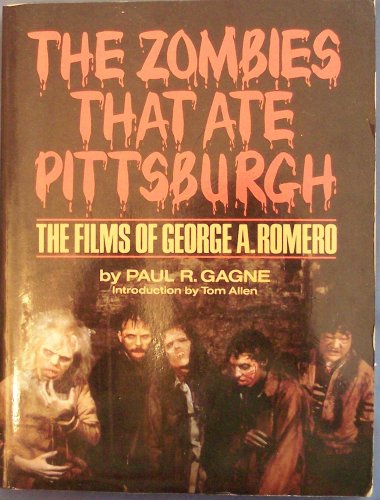 4.)    The Zombies That Ate Pittsburgh by Paul R. Gagne – The one director whose work haunted my childhood dreams like no other were the films of George Romero. One of my oldest VHS tapes was NIGHT OF THE LIVING DEAD, the zombie movie that really kicked off the whole gory zombie apocalypse that can still be felt today in the hit series The Walking Dead. I remember how much fun I had watching DAWN OF THE DEAD for the first time, and seeing the comic book tribute to EC horror comics called CREEPSHOW. Romero has a way of telling a story with characters that you can easily empathize with so when the horror starts, it is truly frightening. I love his take on the vampire genre in MARTIN, the idolized vampire of Hammer Horror as portrayed by Christopher Lee is juxtaposed with an anti-social loser who fails to live up to the charisma of Dracula.  This book offers a look into one of the all-time best American horror directors, who has more hits than misses with most of his work. I personally don’t like what he has made post-LAND OF THE DEAD, but his back catalogue is nothing but great horror and action adventure, as in KNIGHTRIDERS. 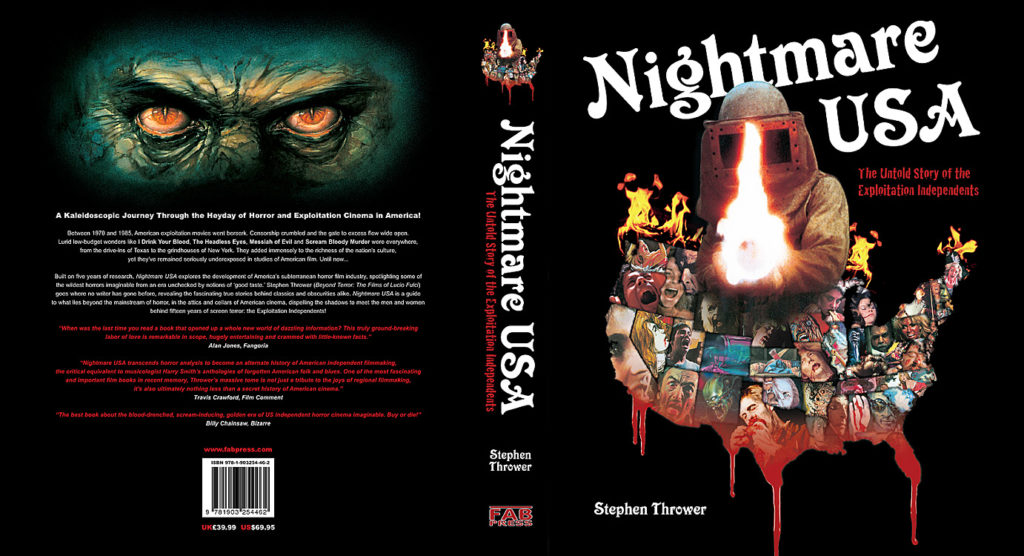 5.)    Nightmare USA by Stephen Thrower – This is my go-to book, packed with brilliant writing on indie horror. The most violent, gory, and shocking horror films were made in the US from 1970 to 1985. This book explores all the classic gut-wrenching flicks that caused riots in New York’s grindhouse district on 42nd Street and Broadway. Thrower knows his movies, and he comes across like a fan who has made it. Let him take you on a blood-soaked cinematic journey, to discover lost gems such as MICROWAVE MASSACRE, and so much more. A lot of the movies discussed in this grand tome are now being released by Arrow Video, Grindhouse Releasing, and Blue Underground. So give this a read, because it demands serious study, and you will have so much fun with it, just as I did. Out of all my horror movie book,s this one is the only one that gets read over and over again.

Well, these titles should keep you busy enough for a while, and with these books you’re sure to discover some fright flicks to impress your friends on Halloween or on any given weekend gore-a-thon. Happy reading, and stay safe in the light –something bad lurks in the dark.