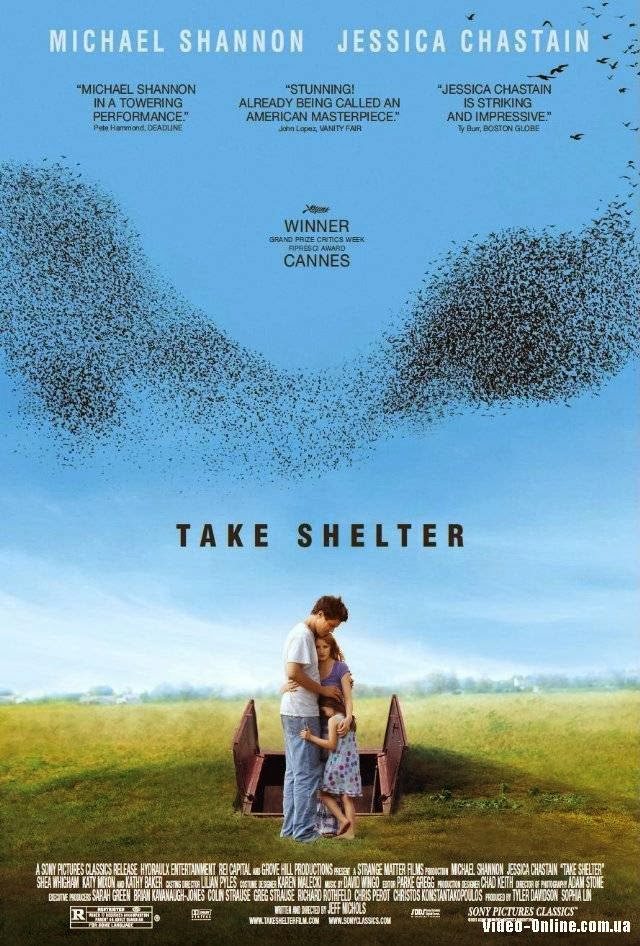 The cult of this movie has grown slowly as the cult of Michael Shannon has grown more quickly. TAKE SHELTER is the second of the five movies Michael Shannon has so far made with writer-director Jeff Nichols, the first being 2007’s SHOTGUN STORIES and the most recent being 2013’s MUD, 2015’s MIDNIGHT SPECIAL, and 2016’s LOVING. Watch all of them, as soon as possible, but since TAKE SHELTER is the first I personally saw, it’s the one I have championed most fiercely.
In TAKE SHELTER, Michael Shannon plays an Ohio man who is having disturbing premonitions that lead him to believe a storm of unprecedented destructiveness is on the way. He has a young daughter and a supportive wife, played by Jessica Chastain (ZERO DARK THIRTY), a solid job and a great buddy of a co-worker, played by Shea Whigham (Boardwalk Empire). He confounds them all by embarking on an increasingly consuming project to build a storm shelter in the backyard which he believes fervently will save the lives of his family.
In any other hands, this plot could play a bit like Bill Cosby’s old routine about Noah building the Ark. With a filmmaker as talented as Jeff Nichols, it feels every bit like a Biblical epic, even though, it should be said, there’s a major question as to whether Shannon’s character is less of a meteorologist than a potential mental patient. The ambiguity looms powerfully over the film, which is ominously and beautifully shot by cinematographer Adam Stone and forcefully scored by David Wingo. This filmmaking team could certainly put together a redoubtable end-of-the-world disaster film if that’s what they were intending to do. Of course, that may or may not be what they’re up to, and I’m sure not going to say so one way or another.
You must see this film for yourself, with an emphasis on “MUST,” and not only because of its poetic frightfulness and its acute American-ness. What makes it an absolute necessity is the central performance by Michael Shannon, which is positively volcanic in its intensity. Here’s an actor who can make you care, worry, fear, doubt, and believe within the course of a single scene. He’s astonishing.