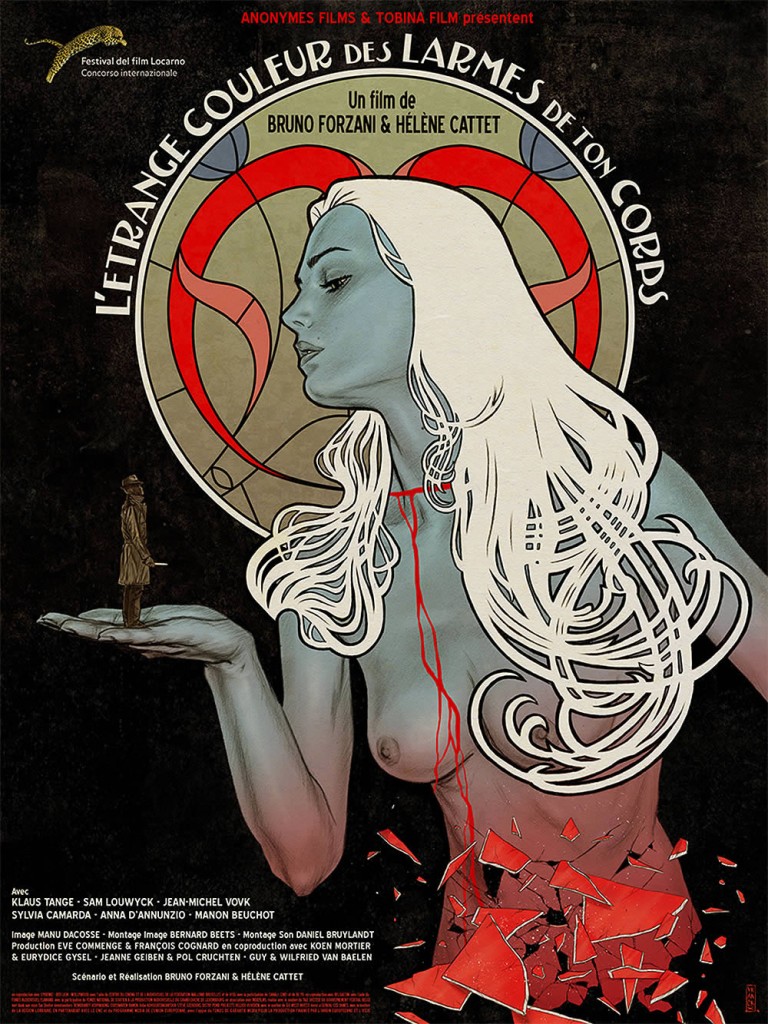 Filmmakers Hélène Cattet and Bruno Forzani helped kick-start the popular resurgence of the Italian giallo film with their debut feature, AMER (2009). This happened despite the fact that the film was less a “neo-giallo” or even a tribute to giallo cinema than a capital-A Art Film that took the cinematic vocabulary of the giallo and filtered it through an abstract sensibility not particularly concerned with traditional narrative. The fact that AMER is closer in form and structure to something like Matthew Barney’s CREMASTER CYCLE than the cinema it appears to mimic led many horror fans to write the film off as an exercise in “style over substance,” without realizing that the style actually *is* the substance. It is somewhat surprising, then, that their follow-up THE STRANGE COLOR OF YOUR BODY’S TEARS is even less concerned with narrative. It feints in that direction at the start, but for the most part this film is even more abstract and puzzling than AMER. After a successful festival run where it seemed to gather as many rabid fans as violent detractors, Strand Releasing picked the film up for limited theatrical release across the States through the Fall of 2014.

The film opens with Dan (Klaus Tange) returning from a business trip to find his apartment locked from the inside and his wife, Edwige, missing. He starts by asking his strange neighbors, who seem uninterested in his plight and instead offer up their own stories. Even the detective who shows up leads the film on a lengthy digression regarding a case he worked years previously in the same building, during which he spied on and became obsessed with a suspiciously familiar woman. Dan’s story fades further and further into the background as the film burrows deeper and deeper into the past and psyches of his neighbors, the detective, and a mysterious figure who lives inside the walls of the building in a hidden, parallel space that seems to double the size of the building (at least on the inside).

All of this makes THE STRANGE COLOR OF YOUR BODY’S TEARS sound a lot more straightforward than it actually is. Every story is told with its own visual and aural palette, all of them informed by the look and sound of classic giallo cinema. The film’s title explicitly references three major giallo films that help provide the viewer with some idea of where the ingredients for these images come from: Sergio Martino’s ALL THE COLORS OF THE DARK (starring Edwige Fenech as a young woman who gets involved with a cult), THE STRANGE VICE OF MRS. WARDH (Edwige Fenech again, as a wife whose penchant for S&M leads to her entrapment an elaborate blackmail scheme, also directed by Martino), and Giuliano Carnimeo’s WHAT ARE THOSE STRANGE DROPS OF BLOOD DOING ON JENNIFER’S BODY? (aka THE CASE OF THE BLOODY IRIS, featuring Fenech being stalked by a killer who knocks off people in her apartment building). What Cattet and Forzani do here, even more than AMER, is filter the basic concepts of those films through a dream-logic sensibility.

There is no question that THE STRANGE COLOR OF YOUR BODY’S TEARS is one of the most intricately designed films to hit screens this year. Every frame of the film is carefully composed for maximum visual impact, and the sound design is similarly impeccable. The soundtrack, like AMER, is made up entirely of music from 70s Italian cinema, with tracks from Bruno Nicolai, Riz Ortolani, Nico Fidenco, and Ennio Morricone among others. These frequently psychedelic songs perfectly offset the striking visuals, helping to create an unmatched atmosphere of nightmarish dread while Cattet and Forzani keep teasing a resolution to the film’s central mystery. However, exactly what that “central mystery” is keeps shifting: where is Edwige? Who is the black-gloved figure stalking the building’s tenants? Who is the man in the walls? Who is the woman living above Dan? Are any of the people in the building who they say they are?

Ultimately, whether or not there are answers to any of these questions will be in the hands of the viewer. Clues and symbols are scattered densely throughout the film, giving it a feel not unlike David Lynch’s INLAND EMPIRE, a beautiful, terrible nightmare where everything seems heavy with symbolic importance. Also like that film, establishing a working theory of what Cattet and Forzani have created here will require multiple repeat viewings, and viewers unwilling to engage with the film on its own terms will once again find themselves frustrated. THE STRANGE COLOR OF YOUR BODY’S TEARS is a gorgeous, unsetting cinematic dream, utterly unlike anything else out there. Adventurous cinephiles absolutely should not miss this on the big screen.