Home  ⁄  The Wire  ⁄  AS A MIDNIGHT MOVIE, ‘GIRLS WITH BALLS’ FAILS TO ENTERTAIN

I saw GIRLS WITH BALLS in one of the midnight slots at this year’s Fantastic Fest, and I have to admit, in many ways, it is very much a traditional midnight movie with as much gore, stupid jokes, and obnoxious behavior as should be expected. That said, many of the jokes don’t land, the gore gags are hit or miss, and the whole thing just feels like a snarky five minute skit stretched out to eighty minutes.

A traveling girls’ volleyball team gets lost on a country road and encounter a cult of insane backwoods cannibals. Hijinks ensue as the team has to fight their way back to civilization without letting internal conflicts between the individual members tear them apart. That is literally the entire plot of the movie.

If you have not yet guessed from my fairly blasé tone in the first two paragraphs, GIRLS WITH BALLS is a largely lackluster movie, but there are spurts of fun to be had with some of the more idiotic bits like a man going to extreme measures to stop a Chihuahua from biting his crotch or the meek member of the team finding her self-esteem in violent ways as she fights for her life. There is also one of the better gross out gags I saw at the fest as two members of the team choose an unfortunate place to hide that quickly goes into—ahem—toilet humor.

There are just too many missteps the movie makes when going for jokes that are not there to be had. A troubadour narrator sings about the team’s chances for survival in a bit that is so aggressively unfunny that it almost plays as Tim and Eric style anti-comedy. The romantic conflicts within the team are given far too much screen time when the jokes all boil down to the uninspired punchline that most of the girls on the team have repeatedly slept with the boyfriend of one teammate. 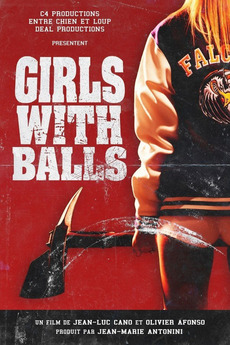 There really is not a lot to say about GIRLS WITH BALLS. Co-writer/director Olivier Afonso at least keeps the movie running along at a decent clip and provides a suitably garish comic book-like tone. But in the end, despite the spurting gouts of blood, half-hearted lip service to girl power, and volleyballs spiked into ugly cannibal faces, the movie just is not that funny or exciting. All of the elements of a fun, traditionally gory and goofy midnight movie are there except for entertainment.