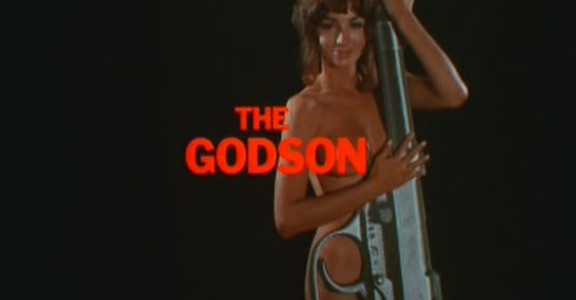 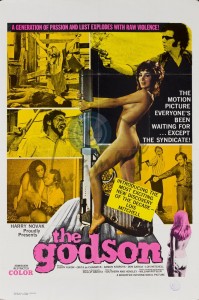 If you buy the 1971 copyright credit on legendary exploitation producer Harry Novak’s THE GODSON — and I guess there’s really no reason not to — then that means only one thing : they got this sleazy softcore number “in the can,” so to speak, in a hurry. A quick nudie cash-in on Coppola’s mob masterpiece was a given, of course, but the fact that writer/director William Rostler (who, interestingly enough, went on to a career in children’s television) was able to crank this out for Novak later during the very same year that THE GODFATHER was released — in fact, you can rest assured Francis Ford’s opus was still playing when this one hit The Deuce and various grindhouse and drive-in screens across the country — is a fairly impressive feat, in my view. Not that my standards for what constitutes being “impressive” are all that high, mind you, but whatever.

And speaking of being impressive, a lot of the nubile female flesh on display here is precisely that. The poster for this flick proclaims their main girl, Lois Mitchell, to be “the most exciting new discovery of the decade” (keep in mind the decade was rather young), and while that might be a little bit much, she’s certainly easy on the eyes, particularly in the opening credits sequence that’s lifted more directly from the James Bond series than it is any mob movie. Sexploitation starlets Uschi Digard — who, sadly, only appears in one scene, but at least it’s a memorable one — Maria Arnold, June Allyson, and the one-time Mrs. Richard Pryor herself, Deborah McGuire (who also turned up briefly in Russ Meyer’s SUPERVIXENS, so Uschi’s not the only “R.M. girl” to be ogled here) clock in for duty as well, so hey, there’s not a whole lot to complain about in the simulated-bumping-and-grinding department.

Unless you count that the fact that so much of it is decidedly strange, even by pre-DEEP THROAT standards, when you had to get inventive to get noticed because you couldn’t legally go “all the way” yet . Seriously, it’s no huge wonder that “discovery of the decade” Mitchell only went on to appear in one more film in her short career (and in a bit part, no less), given the confusing entry into the business she endured here. She shows a fair amount of gung-ho phony enthusiasm for the more “hands-on” aspects of her work, but Rostler can’t decide if he wants to make a hard-hitting misogynistic mob movie or a Benny Hill-style romp, and the end result is softcore with a decidedly split personality . Still, that gives it a leg up over its mostly-dull competition in my view, and trust me when I say that the keen eye will be rewarded by paying close attention to one scene in particular that Rostler offers up here. More on that in a minute, though — first we’ve gotta talk plot. 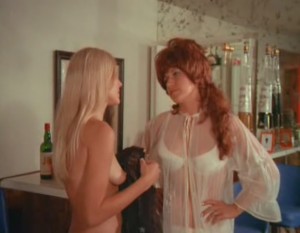 Calling the story in this one “paper thin” is probably being a little generous, but that’s true for any early-’70s softcore effort, isn’t it? Marco (Jason Yukon) is the godson of a feared mob boss who’s determined to make his own mark in the underworld and break out from the long shadow cast by his benefactor (who, of course, he resents the hell out of) . To that end, he double-crosses his Don by turning the previously-failing local brothel into a rip-roaring success, but his business acumen angers the wrong folks and proves to the key to his eventual downfall. Whoops, sorry for giving away the ending — suffice to say he’s not the only one who dies, though.

In between all this middling quasi-drama the girls he employs are put through a heck of a workout, and by and large seem to be having fun. Hicksploitation stalwart John Tull turns up to get his willie wet, and I vaguely recognize some of the other guys in this one as well, but the most recognizable face appears only briefly and is obscured by two naked women positioned on his lap — none other than legendary science fiction scribe Harlan Ellison is the lucky fella in question, in a scene that sees our ladies performing an “outcall service” in the writer’s actual (as in real life) home. Yes, friends, this is most definitely the only (nominal) mob flick that depicts a post-sci fi convention geek orgy, guaranteed! 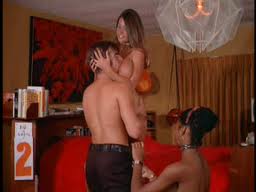 THE GODSON is probably worth a watch for that fact alone, but a little more Uschi would have been welcome (I suppose you can say that about any film, though), especially since even though, as I mentioned, the other ladies all seem plenty hot to trot, she still puts ’em all to shame with her boundless bouncing and eager carnal euphoria. I have no idea if she’s anything like to always-ready-to-ride nympho she plays in every single one of her flicks, but ya know, it warms my heart to think that she might be.

Still, in case I haven’t made it abundantly clear already, THE GODSON is, at the very least, a decidedly different kind of sexploitation picture. Sure, it’s uneven, and frankly pretty amateurish in many places, but it’s at least never (well, never might be a reach — will you settle for almost never?) dull. I don’t really know if Rostler had a very clear idea of what he was doing here, but watching him try (and, sure, sometimes fail) to figure it out while a bunch of good-looking naked women writhe and gyrate isn’t the worst way to spend 92 minutes of your life.

For those of you sufficiently intrigued to feast your eyes on this curiosity for yourself, it’s available on a double-bill DVD from (of course) Something Weird Video, where’s it’s paired with the decidedly darker and more somber BELOW THE BELT (which features a lot more of Uschi, yay!). It’s presented in a reasonably good-looking full frame print with fairly solid mono sound, and the disc includes a veritable shitload of extras including a feature-length commentary track with Harry Novak and assorted co-conspirators, two short Uschi nudie loops including one where she meets Dracula, a generous sampling of trailers for other Novak sexploitationers, and that “gallery of exploitation advertising art and stills” that’s ubiquitous on all of these SWV “special edition” discs they put out through Image Entertainment. All in all, it’s a heck of a nice package — and it definitely doesn’t hurt that the main feature itself is a fair bit more interesting than most similar fare produced at the time.