I had theorized that the rest of Cooper’s consciousness had been circling around the electrical grid just waiting for “Dougie” to plug in and shock himself. When Cooper finally returned on Sunday night, he took control of his surroundings, remembering everything about his life as Dougie. Every observance he made as Dougie, however minute seem to have been retained in Cooper’s memories, including the handgun secretly worn by Mullins. It was touching to see him thank nearly everyone who had been kind to him during his temporary stupor. Seeing him take charge of everything and everyone around him gave the show a much needed jolt not experienced since episode eight’s surreal journey through the past. He was even thoughtful enough to arrange to have another copy of Dougie manufactured to live with Janey-E and Sonny Jim. We now only have to wait one more week to witness what I assume will be a collision course of Dale Cooper and the rest of the main cast in the town of TWIN PEAKS, setting everything right and closing out a story that has remained unresolved in our minds for over twenty-five years. 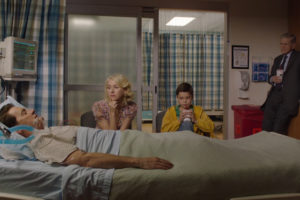 I didn’t find Evil Cooper’s betrayal of his son very surprising at all. Neither am I convinced that Richard Horne is necessarily dead although he certainly deserves to be. The only observer being a nearly mindlessly stoned Jerry Horne and having even less of an idea as to what’s going on than the actual audience. I do wonder about the specifics, the meaning and what Evil Cooper’s intentions are regarding the two coordinates given to him. One thing’s for sure, Cooper somehow needs to get Teresa Banks’ ring on his doppelganger’s finger to lead him on a one way trip back to the Black Lodge. Will Evil Cooper try to get the real Cooper on to the first set of coordinates? After everything, will the “shock” even work on him? 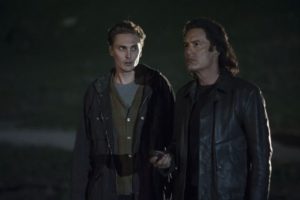 Most people’s suspicions about the last meeting between “Cooper” and “Diane” turned out to be true when she finally revealed that Evil Cooper DID in fact rape her in her home. What no one seemed to see coming was that this Diane was in fact just another manufactured doppelganger. What was Evil Cooper’s purpose for the Diane doppelganger? Where is the real Diane? Is she dead? Is she trapped in the Lodge? If so, does the real Cooper know this? The doppelganger kept repeating, “I’m at the sheriff’s station!” Is there some kind of a connection between her and Naido? 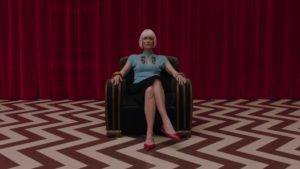 According to The Secret History Of Twin Peaks, Audrey Horne had been left in a coma following the events of the final episode of season two of the original series. We had to wait until well over the halfway point for her to finally return to the series. Strangely, she only interacted with one other character, her husband. She pleads with him to take her to The Roadhouse yet cannot remember it’s actual location. When they finally arrive there, she drinks a martini and dances to her own theme music. Things seemed pretty strange during this visit. Then again, The Roadhouse seems pretty strange in general lately. After that final reveal are we to believe that Audrey is STILL in a coma?

Is it just me or is Eddie Vedder turning into Neil Young?