Home  ⁄  The Wire  ⁄  GRINDHOUSE A GO-GO: XTRO AND TRICK OR TREAT AT THE PORTAGE THEATRE IN CHICAGO!

Time to jump in the Charger, hit the pavement, and get your ass to your local repertory theatre and give them some coin for a cool as hell flick. Or, if you’re lucky as you are this time, a double feature of classic flicks for a mere five bucks! It’s time for a ride around the nation on the lookout for vintage badass. Welcome to

AT THE PORTAGE THEATRE 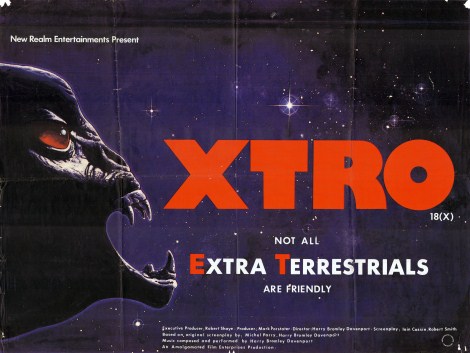 From The Chicago Cinema Society website: “The Chicago Cinema Society has been searching the entire planet for a 35mm print of a film that has long thought to be lost on celluloid. We never ever gave up and finally found, literally on the other side of the planet earth, the only known 35mm print of XTRO! This is an amazingly imaginative and innovative masterpiece of horror, sci-fi and existentialist cinema. How does one even sum up the plot of XTRO? With one simple word . . . . . . . . GENIUS! The film focuses on a young boy who witnesses his father being abducted by a light from the sky. Three years later, that light returns and plants a seed in the ground. That seed grows into a horrible creature. That creature then impregnates a woman. That woman then gives birth to a fully-formed version of the father, just as we last saw him. And that’s just the set-up! This will be your only opportunity to see the masterpiece in 35mm which is making a very brief trip to this continent.”

“We will also be screening a very rare 35mm print of one of the best Heavy Metal horror films ever made: TRICK OR TREAT! Made in 1986 in the era of the PMRC’s “crusade” against heavy metal, TRICK OR TREAT is the beautiful story of Eddie Weinbauer (played by Skippy of the show Family Ties) a teenager enthralled with heavy metal sorcery. After Eddie’s rock star idol Sammi Curr dies in a hotel fire, he plays one of Sammi’s albums backwards and discovers a bizzare message. Even more surprising is that playing the album backwards invokes the rock star’s spirit to enact revenge. This film also has wonderful supporting roles by GENE SIMMONS and OZZY OSBOURNE which are not to be missed. This might be your only opportunity, especially in the age of digital, to ever see TRICK OR TREAT on 35mm as long as you live! Trick or Treat” print provided courtesy of our friends at the American Genre Film Archive” All you lucky Chicago Bastards click here for more.. I hope to see you there! It’s FIVE BUCKS! Quit being a cheapass and go!