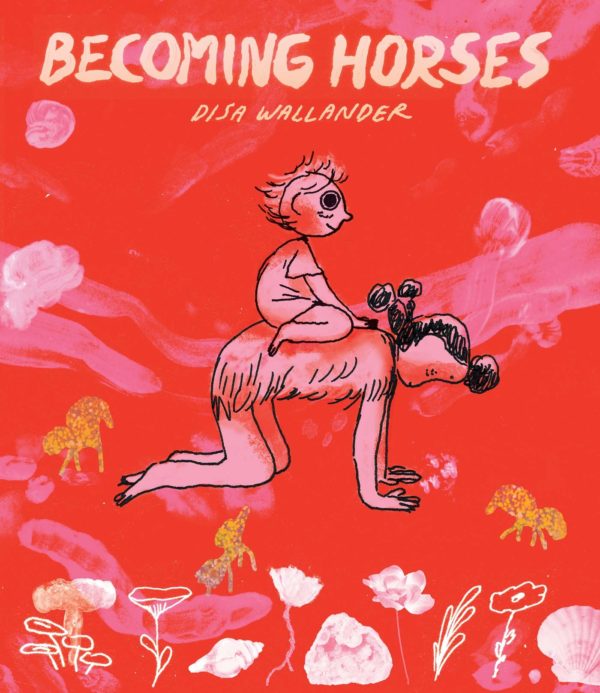 It might be fairly stated that Swedish cartoonist Disa Wallander appears to have one over-arching concern running through all her work, but given that said concern is the nature of the creative process itself and its centrality to the phenomenon of identity, it’s at the very least a perhaps-infinitely expansive one that’s more than able to subsume any number of “smaller” ones within it, cast them in a new and more considered light, and then return to taking a more “macro,” all-encompassing view. The remarkable thing, though, is that she’s got, for lack of a more readily-available term, a “knack” for transitioning from one exploration to the next with such fluidity that no matter how complex the conceptual themes she’s tackling may be, it all seems incredibly, well — basic? Simple?

Which sounds like either a polite brush-off or a roundabout compliment, I’ll grant you, but it points to an interesting and tantalizingly un-resolvable conflict that’s always right there on the surface in everything she does, from her Slowly Dying short strips to her Peow! Studio collection, The Nature Of Nature, to her just-published debut full-length “graphic novel” from Drawn+Quarterly, Becoming Horses, namely: When an artist’s work is about said work, how can something so hermetic and self-contained also be universal? Becoming Horses tackles the question in a formally inventive manner, but ultimately errs a bit on the side of caution, although perhaps not in the way one would expect. 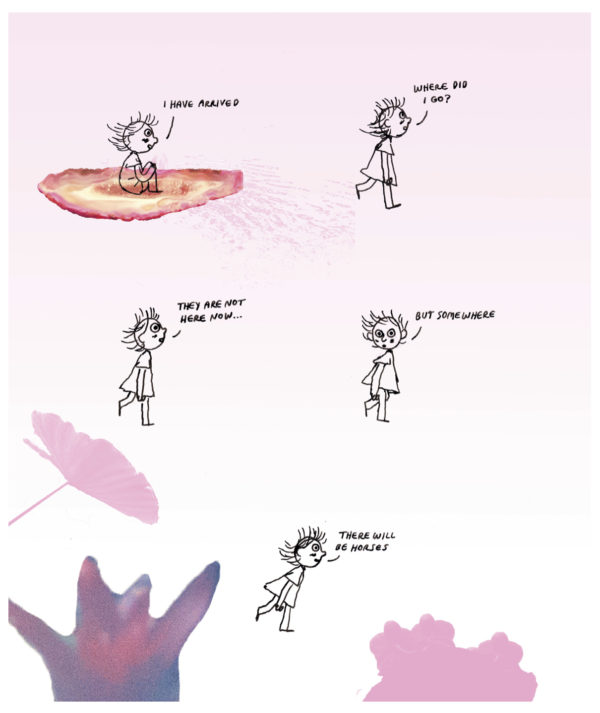 Simply put, it doesn’t take the most astute reader to pick up on the fact that Wallander’s always-nameless characters are stand-ins for aspects of both herself and her approach to making art — nor should it, a populist sensibility being key to successfully expressing and exploring these particular themes — but as they float from one loosely-rendered but conceptually-dense scenario to another, the idea that they are, in point of fact, “just” ideas is never far from the surface. And hey — what even qualifies as a “surface” is a pretty open question herein, given that Wallander’s loose, sketchy figures — defined more by dint of their actions, reactions, and expressiveness rather than they are by their barely-physical “beings” — are rendered above, arguably even separate from, the mostly computer-generated (I assume, at any rate) collages they don’t so much enter and exit as simply pass through.

Impermanence, transience, and metamorphosis are the beating heart of both life and art, of course — change being the only true constant and all that — but to her credit, Wallander embraces this and evinces no desire to push back against it in any way, and it’s that attitude, as much as anything of a purely technical nature, that invites comparisons between her work and Jules Feiffer’s Explainers. It would, however, be grossly unfair to say this is anything less than fairly unique stuff — Wallander’s process is her own, after all, as is her surprisingly light-hearted narrative tone, which even manages to cushion the blow when her nominal “protagonists” confront the emptiness of art, communication, and probably even existence itself at the end of this book. But a journey that leads to nothing, that merely asks, “What’s the point of it all, anyway?” as its central thesis, is going to be a little bit whiplash-inducing when you’ve taken the need for self-expression as a given from the word go no matter how deftly you “soft-sell” it — and with all due respect to Wallander’s notable creative ambition, I think her 180 from “How is art made?” to “Why is art even made in the first place?” ultimately results in a work that pulls back after pages and pages of pushing forward. 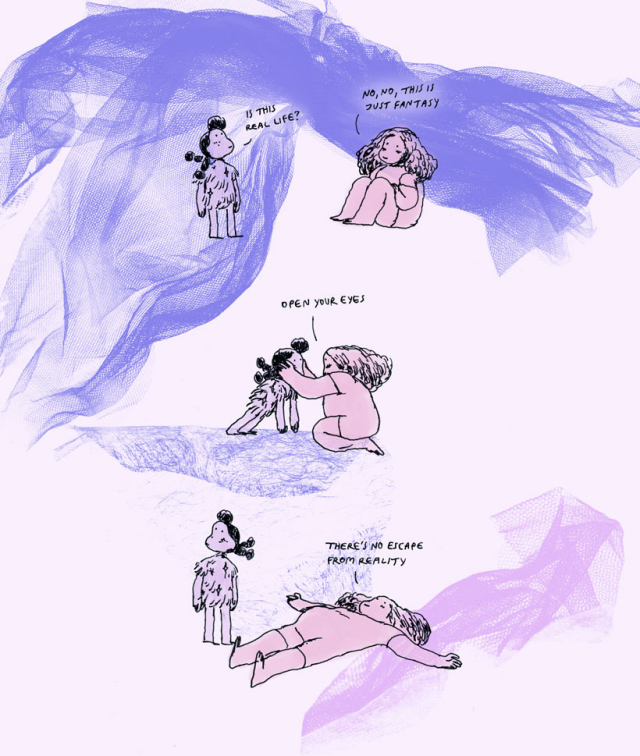 That being said, my view as both a reader and a critic is that a book that tries to do a bit too much and comes up short is always going to be more interesting — as well as challenging — than one that simply sticks to doing what it can and doing it well, so I wouldn’t want for a moment to suggest that Wallander should reign in the scope of either her concerns or her willingness to experiment. Feeling your way forward in an open space might lead you to bump headlong into an invisible wall, but when she finally manages to either break through that wall, or work her way around it, my best guess is that the results will be rather spectacular. It won’t be easy, true, but given that we’re talking about an artist who’s exploring ideas related to where, how, and ultimately even why ideas take shape and want or need to be expressed, it’s worth pointing out that this invisible wall she’s bumping up against is entirely self-created, and the same will be true of the manner in which she moves beyond it. 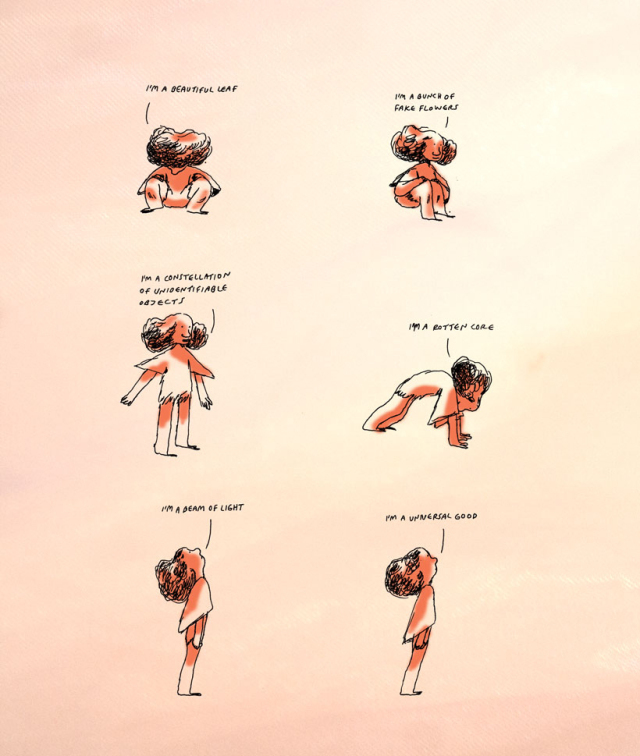 Which brings me back to my assertion that Becoming Horses errs on the side of caution, but not necessarily in the manner one would expect: In a book that seeks to balance the personal with the universal and utilize each in a manner that informs the other, it’s the perhaps less-quantifiable universal that is expressed with far more confidence and clarity, while the uniquely personal exploration of why Wallander herself feels compelled to express her ideas, indeed her very idea of herself, though art is one she doesn’t seem entirely comfortable answering, opting instead for a borderline-nihilist “It probably doesn’t matter anyway” rejoinder with a polite “It’s all about the journey, anyway” metaphorical escape hatch. In a work otherwise overflowing with wonder and inquisitiveness, it feels like a defensive reaction, like she’s revealed as much about herself as she’s comfortable with and that’ll be all for now, thank you very much. Hopefully, this intriguing and admirable — but ultimately tentative — step behind her, she’ll forge ahead and go boldly where she hasn’t gone before next time around.