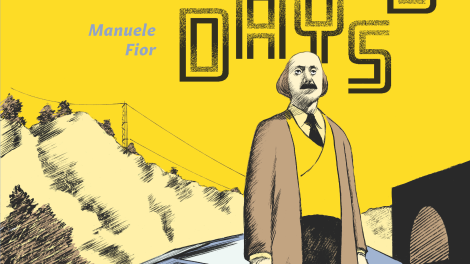 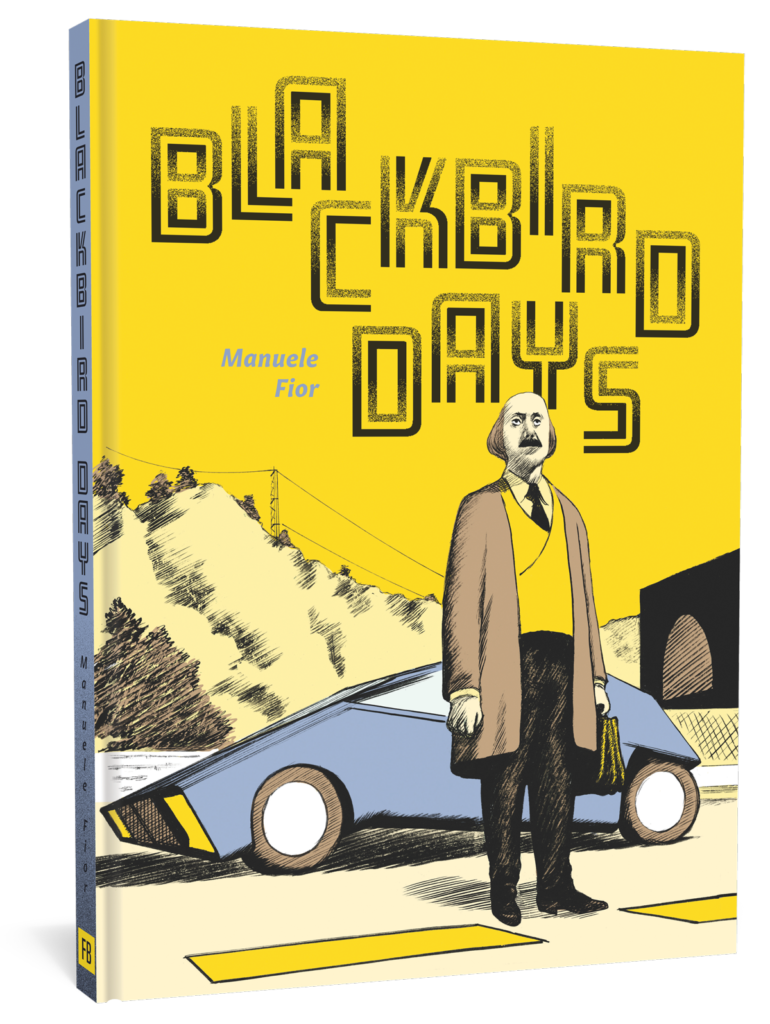 Italian cartoonist Manuele Fior now calls Paris home, but his publishing home is clearly Fantagraphics, who released his breakthrough graphic novels 5,000 KM Per Second and its equally stunning follow-up, The Interview, in 2016 and 2017, respectively, and are now making it three books in three years with their collection of a decade’s worth of his best short strips, Blackbird Days, which is at the very least a showcase for Fior’s incredible artistic and authorial versatility, but at its best is something altogether more.

Case in point: The volume’s longest (and titular) piece bears no direct narrative connection to The Interview, but is clearly set in the same just-slightly-askew world and uses the story of its troubled protagonist — an engineer on the precipice of getting busted for a “white-collar” crime — to set the stage for an intriguingly oblique mini-mystery, but also to lend weight, breadth, and depth to Fior’s earlier graphic novel. Illustrated in a fluid style that is eminently functional at its core but makes plenty of allowances for expressionism, it’s a fast read that nevertheless conveys a tremendous amount of visual information with a minimal amount of fuss and muss. Once you’ve read it you’ll want to read it again — and it’s on second pass-through that the full scope of everything Fior’s achieved so apparently-effortlessly (as if!) really shines through. 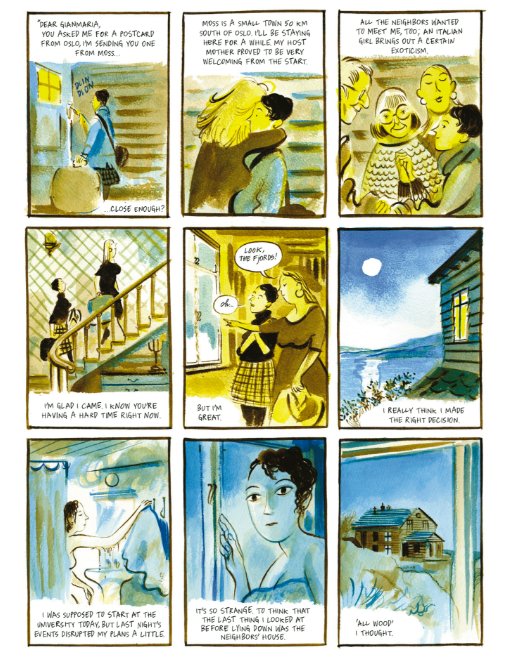 Other strips, on the other hand, grab you right away — “Grandma And Grandson” juxtaposes the story of one woman’s harrowing exodus from war-torn Laos in the 1960s with her adult grandchild’s ruminations on his dual cultural identities, delineated by Fior in lush grayscale tones and washes (or a digital approximation thereof?); “Class Trip” utilizes a Krigstein-esque series of inventive page layouts to tell the tale of a teacher in the midst of a vaguely-outlined personal crisis who overhears what her students really think of her, prompting a surprising and possibly life-changing decision; “The Story Of Gabriel C.” is a poignant look at a French solider in World War I and his (very) great loss made all the more direct and painful by means of Fior’s expert use of watercolor; a man’s frenetic search for his missing child is imbued with a palpable sense of panic and desperation through the contrast of less-defined people against intricately-detailed buildings and locales in “Help! Hilfe!” 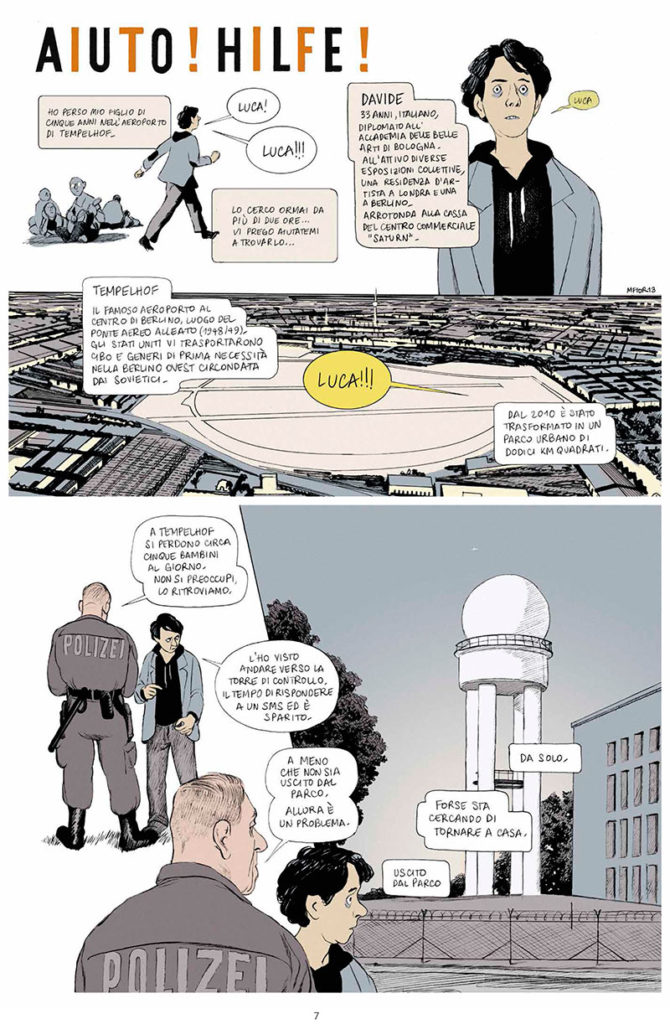 The mood of many of these stories is decidedly somber, at times even wistful, but in no way morose — Fior excels at expressing the mature viewpoint of a sympathetic, but perhaps world-weary, observer, even his first-person narratives having a kind of resigned-to-reality tone to them that certainly doesn’t communicate anything so dull and cliched as “everything’s going to be alright,” but does seem to have achieved a kind of tentative peace with the idea that “everything’s going to be what it is.” Until we get to the end, that is — 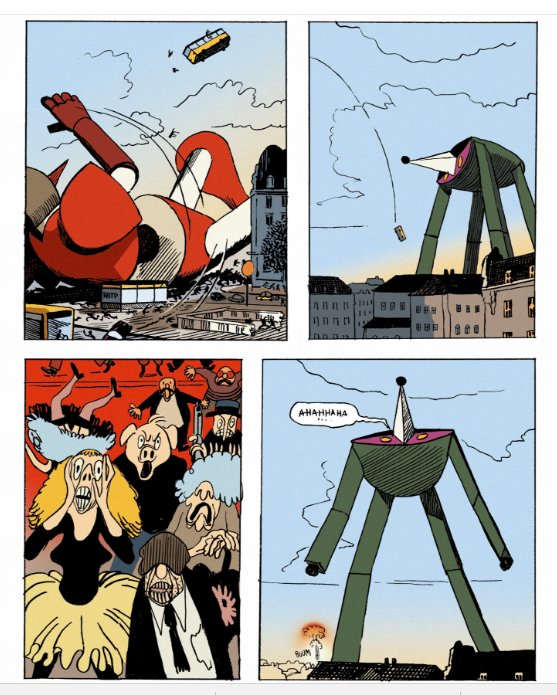 “Gare De L’Est” comes out of nowhere and is absolutely nuts in the best possible way : a father and son get an up-close-and-personal look at two Gigantor-style battling robots as they sock the living shit out of each other (not that they’ve living, mind you, and therefore presumably have no need to shit — but I digress) over the space of ten near-wordless pages. Dynamic, exciting, straightforward, utterly devoid of irony or pretense, there’s something very nearly sweet or even innocent about this sci-fi absurdist punch-up that stands in such stark contrast to all that has come before that it makes for the perfect outro to the collection as well as a borderline-joyously batshit romp in its own right. If the previous stories in the book left you wondering “Jesus, is there anything this guy can’t do?,” then it is “Gare De L’est” that answers, emphatically, “No, there isn’t.”

My one quibble with Blackbird Days is economic: Certainly the book’s generous physical dimensions, thick paper, and quality hardback covers lend it an appropriate “Eurocomics Album” look, but at the end of the day, when we subtract all the title pages and their blank “B-sides,” what we’ve got here is 62 pages of art and story — for $22.99. Is it worth it? I think so, as you’ll return to it again and again — but there would be no doubt whatsoever about its value for money if it were published as a “one-shot” in standard comic book format (you could even do cardstock covers) for, say, eight or nine bucks. I still recommend that you buy this collection, absolutely, but if it were released in a more scaled-down and consumer-friendly format, I’d recommend you buy a couple extra copies to give to your friends.