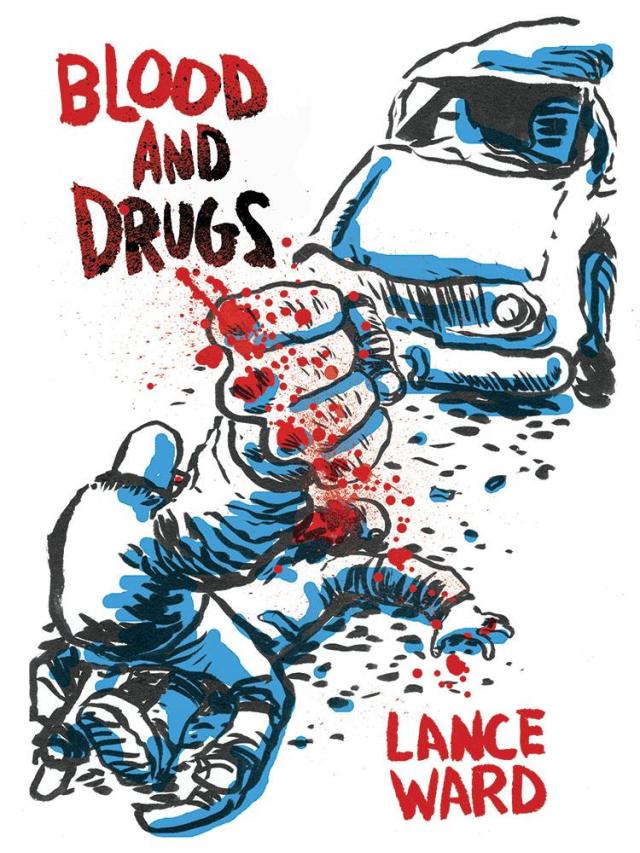 Where I come from, drugs were always considered to be pretty fun — and, for the record, I feel that if consumed responsibly they are — but who are we kidding? Kicking them can be a real motherfucker, and it’s not like the path of recovery isn’t perilous in its own right. And when you’re in recovery, or attempting to begin recovery, on the social and economic margins, the entire enterprise is a hell of a lot trickier than it is for, say, some ne’er-do-well rich kid forced to walk the 12 steps after trashing daddy’s yacht.

Geographically speaking, at least, cartoonist Lance Ward is himself from “where I come from” — that being the Twin Cities, for those not in the know — but he’s clearly had a vastly different “drug experience” than I have, and in his new Birdcage Bottom Books-published original graphic novel, Blood And Drugs, his autobiographical stand-in character, Buster, indeed is having a hell of time kicking the habit from his position on those just-referenced social and economic margins. Oh, and a hand injury that renders him nearly unable to draw, effectively preventing him from both expressing himself creatively and making a living? That doesn’t help matters much. 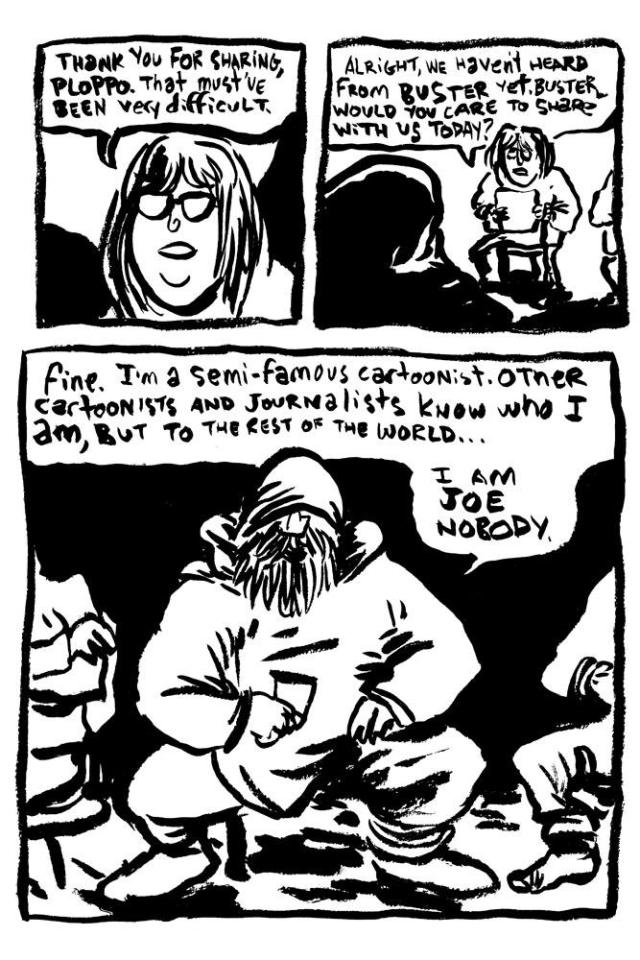 With a narrative structure loosely based on the 12 steps themselves and a drawing style that reflects classically exaggerated cartooning sensibilities filtered through physical impairment, the book is a visceral gut punch, but not one determined to leave you down for the count: Progress is possible in Ward’s story/memoir, but it’s hard won and not without “trade-off” costs of its own. The question Ward seems to be positing throughout, then, is not only what it takes to get and stay clean, but whether or not doing so is even a realistic option once a person is so far down a self-destructive path, and generally surrounded by people in the same position. And while the common answer you’ll likely hear from both right-wing “just say no” blowhards and liberal self-helpers is probably just either a mean or a nice version of “sure, if you really want it enough, you can do it,” the more realistic view offered from within the proverbial belly of the beast itself that Ward offers is that without real community and a healthy dose of the kindness of strangers, you’re ultimately doomed. 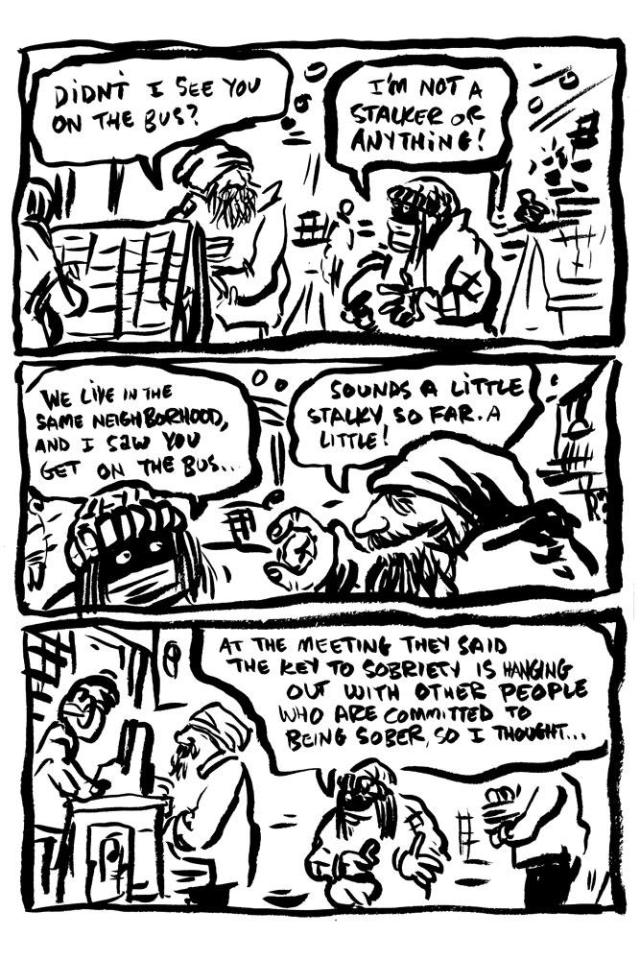 “Raw” and “immediate” are our two key buzzwords to keep in mind in relation to this work, as the “street-level” dialogue and necessarily haphazard illustration offer what can only be described as the most unmediated expression of personal armageddon and its aftermath committed to the comics page in recent memory, arguably ever. “Not for the faint of heart” may be a solid enough disclaimer to slap on this, especially if you are, but here’s the thing — it’s a book that is in no way, shape, or form heartless itself.

It is, however, tough. At times exceedingly so. The title itself makes that much plain as day to even the most oblivious would-be reader. But the odyssey of Ward’s “Buster” alter ego is also replete with small rewards, with timely acts of charity, with a kind of “gutter camaraderie” — and even with the occasional (small in reality, but large in context) triumph. Don’t be concerned about “feel-good” bullshit — this is far too honest a work for that. But it’s also honest enough to admit that even the roughest and most unforgiving of life’s slogs aren’t entirely absent occasional rays of sunshine, and that clinging to them — and working your ass off to make them a more frequent occurrence — is kinda what this whole process of coming out the other side is all about. 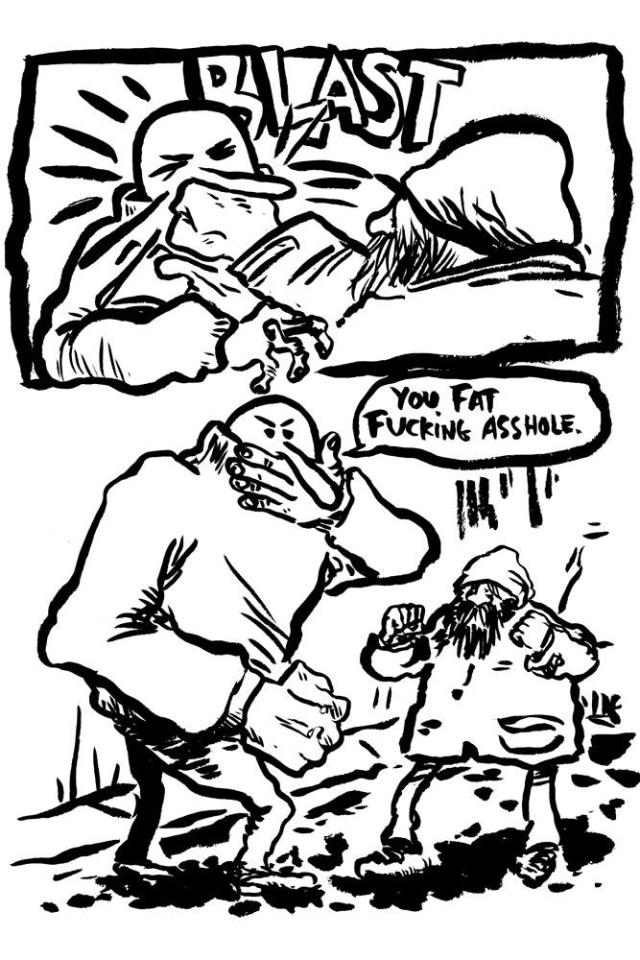 Going through all this admittedly difficult shit on the cold winder streets of Minneapolis and St. Paul only compounds the challenge, of course, and relapse looms around almost every corner, but the guarded optimism that makes its presence felt from time to time herein is not only an effective counterweight to the psychological and physical withdrawal, bleak employment and housing prospects, and casual violence that are the daily reality of addicts both current and former, it’s also both impressively brave and far less naive than the cynical may be inclined to believe. Reflective as it is, then, of the whole of addiction and recovery — good, bad, and all points in between — Ward’s book is a strong work of comics realism and one of the most instantly-memorable reads in some time.

Blood And Drugs is available for $15 from Birdcage Bottom Books at https://birdcagebottombooks.com/products/blood-and-drugs