Nacho Cerdá’s 2006 spooky movie, THE ABANDONED, centers on a woman returning to her family home deep in the cold woods of Russia, curious to unravel the mystery of her biological parents. What she finds there is a violent, shocking past that threatens to consume her—a murderous death echo that she barely escaped. If you’ve never seen it, it’s a pretty solid horror film, but the thread of that movie and the thread of American Horror Story: 1984—which will go down as the best season of the series yet and a truly rewarding (and remarkably coherent) stretch of television—is that sometimes we should let the past stay where it is: in our rearview mirror. We mustn’t let the past define our future, and we mustn’t fret on the things we cannot change, lest they end up consuming us with the rage of revenge. Otherwise those bones that we dig up and those haunts we once used to roam, they’ll roar to life with a bloodthirsty yell and will not be satiated until the last drop of crimson is spilled. The constant spike of unpredictability that ran rampant through these tragically short nine episodes all comes to a head in “Final Girl,” written by Crystal Liu and directed by John J. Gray, which ties all plot strands up nicely. 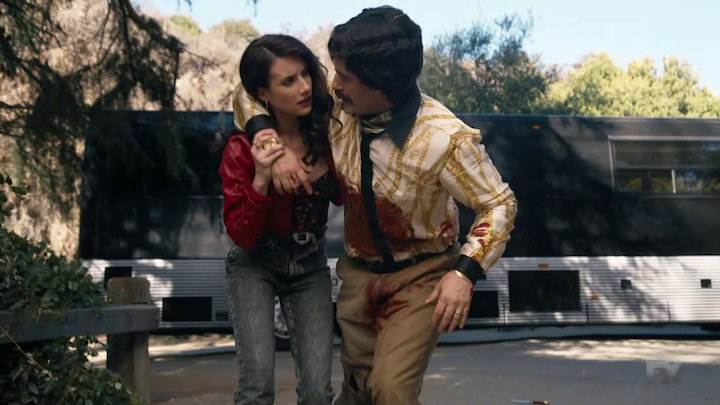 For an installment that takes its name from one of slasher films’ most enduring tropes, it’s interesting that the main focus of the finale wasn’t geared on who the “final girl” is, or whether or not they’d survive. Instead, Brooke (Emma Roberts) gets to Camp Redwood, quarrels with Margaret (Leslie Grossman), gets shot and is thought to be dead—but it’s revealed she she survived thanks to Ray (DeRon Horton), in a nice bit of course correction from the coward we met in the early episodes. We later find out that Brooke is now living in Oregon, with kids and a dermatologist husband, happy that she made the decision to stop chasing her horrific past and looking towards her bright future. I also like that, though there were subtle hints dropped about it in earlier episodes, Brooke ended up being the wholesome ‘final girl’ despite the potential that she cheated on her fiancé prior to his murderous outburst during their wedding—but nope, she was a virtuous young woman as befitting her female horror brethren. But more on her in a moment.

And then there’s Donna (Angelica Ross), who avoids her self-fulfilling fate of following in her father’s murderous footsteps and becomes the director of the same asylum from which she once helped Mr. Jingles (John Caroll Lynch) escape. Her survival of Camp Redwood’s insanity also cements her shared spot on the threshold of ‘final girl’ with Brooke, an honor she thought she’d never get considering the historical under-representation of black people in the genre, which goes unremarked upon in the moment, but certainly noticed—especially considering that the writing, acting, and directing staff of AHS: 1984 has been fairly diverse this season. 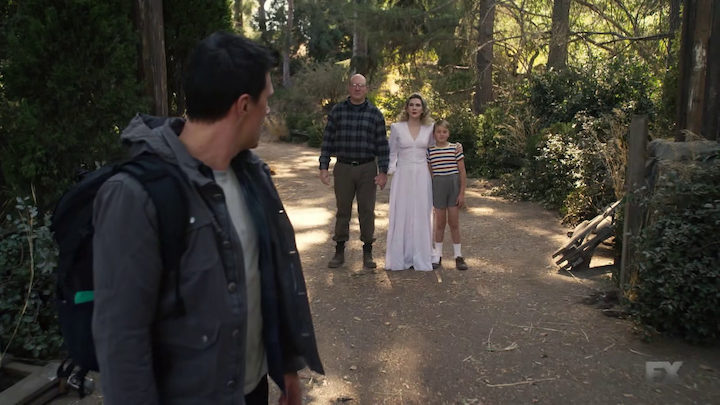 I thought we’d see a massive Halloween bloodbath at the concert that Margaret was organizing in 1989 and yet, the show sidesteps it entirely via Trevor (Matthew Morrison) blocking the road with a bus and shooing people off with random excuses as to why the event isn’t happening. My thought behind this is that if the show were to get its hypothetical tenth episode for the season, the ninth episode would probably have focused on the concert and the chaos stemming from that. Since however, there is not, things feel a touch anti-climactic. Still, the subversion of expectations is always welcome. There is however, quite the buffet of carnage candy when the ghosts are finally united by an act of kindness from Brooke.

Margaret shoots Trevor outside the Camp Redwood property line and leaves him for dead, but Brooke helps him across to die on the right side of the “barrier.” Brooke’s benevolence changes Montana (Billie Lourd) entirely, mutating her once unbidden rage to now choosing to do good and, with the gaggle of Redwood Revenants, bond together to kill Bruce (Dylan McDermott), dumping his body off-site so he isn’t resurrected by the blood curse that has infected the camp for years. This bit feels like a waste of a character, considering the buildup in these past few episodes, only to have him dismissed without a thought in a few, fleeting seconds. The neon pop-poltergeists then turn their sights on Margaret for some long overdue, satisfying slaughter that just about stretches every penny in the effects crew budget. It was insanely gratifying to see a wretched character like Ms. Booth get her just desserts, first by getting her limbs hacked off one by one and fed to a wood chipper. Additionally, it was satisfying to see the ghost crew turn their blades onto Richard Ramirez (Zach Villa), first killing him (long time coming, if you ask me) and then continually dismembering and dispatching him once the curse resurrects him to prevent him from ever escaping (and frankly feels like revenge wish fulfillment) to finish his rampage. 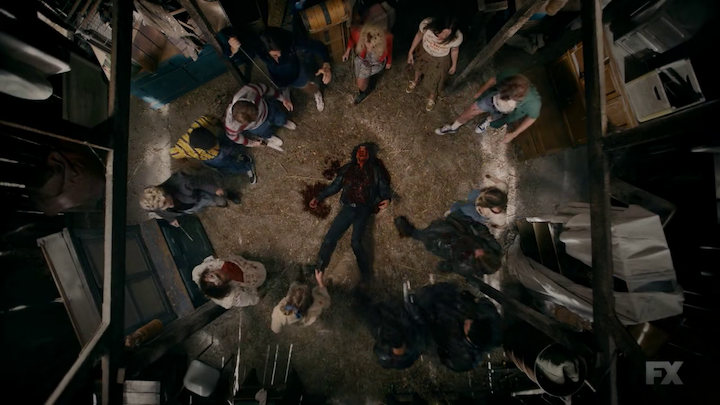 The episode continually surprised me through most of its sprinting runtime, namely with a bit of opening misdirection, courtesy of A Flock of Seagulls’ “I Ran (So Far Away)”, unaware that we would end this chapter of AHS: 1984 in 2019. They don’t hold on to the ruse for too long, with a young man being driven to the rotting remains of Camp Redwood, before it’s revealed that we’re checking in with the grown-up Bobby Richter (Finn Wittrock, the last of the AHS alums this season) who is seeking out the history of his family after having been told by his now-deceased aunt about the true history of his life. For the long run of the episode, Jingles Junior (the loving name Margaret saddles him with) is stuck listening to Trevor and Montana divulge the long history of Camp Redwood, from the aborted massacre in 1989 and the chaos that has ensued since. But once the “previously on” component is dealt with, we dig into the more emotional tissue buried within the episode—the emotional reunion of Bobby with his father.

The young man has been getting money sent to him for a long time, and once he visits Donna at the mental hospital (at Montana’s urging), he finds out that the mystery benefactor is none other than Brooke, using those dermatological ducketts to give him a moderately successful upbringing. The gooey, sentimental part of it all is that Brooke was inspired by Jingles’ escaping to Alaska and starting a new life, something that sprang hope inside of her and so she wanted to return that favor. That’s so heartwarming. And though it felt like the show might pull the wool over our eyes and either kill Bobby and leave him on the Redwood property for eternity with his family, or not even give us the reunion he so craved, it ends happily with Bobby hugging his father for the first and last time, ensuring there isn’t a dry eye in the house. Bobby walks away from a place few have had the pleasure to leave, all set to the strains of the song “The Living Years,” by Mike and the Mechanics (the lyrics I’ve excerpted above, fitting lyrics I say). As the season comes to a close, it was nice to see that Bobby gets to feel the closure of seeing the family he never knew in his present, while escaping the violent past that they were inextricably linked with, one that consumed them and so many others. That’s an oddly touching capper to an annoyingly truncated season of American Horror Story.