For many people of a certain age, there’s a certain school-set television show that corresponds with their age range. There were the adults who viewed The Wonder Years as a nostalgia-tinted look back at trodding the halls of academia while the Vietnam War raged in a country far away. Folks who grew up in the ’80s looked to Freaks And Geeks for their teenaged feels. Canadian kids (and Kevin Smith) had Degrassi Junior High and people slightly older than me identified with the short-lived My So-Called Life. I watched all of these shows and sympathized with all of these people since they too were struggling through their awkward phases of pre-pubescent youth, but the one that really resonated with me—since I was younger and in the same grade as its cast of characters—was Boy Meets World. Today I’m talking about an episode that I loved when it aired and, honestly, still love to this day; an episode that many fans consider to be the best episode of the series—“And Then There Was Shawn,” episode 17 of season five (original airdate, February 27th, 1998).

Created by Michael Jacobs, Boy Meets World was an often authentic, honest look at the trials and tribulations faced by a gaggle of adolescents: Cory Matthews (Ben Savage), Shawn Hunter (Rider Strong), Angela Moore (Trina McGee), and Topanga Lawrence (Danielle Fishel). As the show went on, the characters aged, moving from middle school through to college, and the writing grew to reflect their progression through life, stepping into serialized storytelling dealing with subject matter like relationships, religion and alcohol abuse. The writers would use special event episodes to filter their subject matter through, like “Who’s Afraid of Cory Wolf?“ which doubled as a Halloween lycanthropy lark and as an allegory for Cory’s trek into puberty. The episodes that bookend “And Then There Was Shawn” are some of the deepest depths the series would take, dealing with Cory’s infidelity and on the opposite end, Shawn’s flirtation with alcohol. But here, credited writer Jeff Menell and series director Jeff McCracken had one goal in mind: shake off the teen angst and deliver a riotous half-hour of television, one that broke the fourth wall with unrestrained glee. 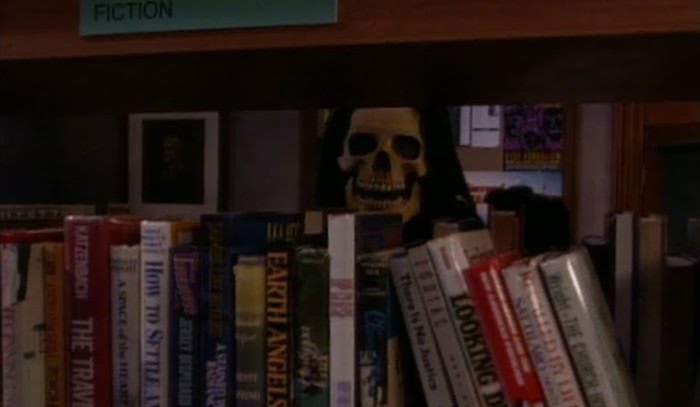 The plot falls somewhere in the hyperrealistic middle of THE BREAKFAST CLUB and FRIDAY THE 13th, with John Adams High’s usual suspects stuck in detention after Shawn chides a male classmate, Kenny, for innocently borrowing a pencil from Topanga (this episode falls in the middle of Cory and Topanga’s bad breakup), seeing the gesture as more than just a simple act of kindness. This tiff lands everyone in trouble and soon they find themselves picked off one by one, just as in the source material from which the episode takes its parodic name (the politically correct one, anyhow). It’s then revealed, SPOILER ALERT for a ’90s television program—that Shawn is somehow the killer, murdering anyone who stands in the way of Cory and Topanga’s true love. It’s kind of a sweet, macabre button to put on an episode that was made as a one-shot goof. Yes, the episode isn’t overtly scary, but what matters is if it’s funny and boy, is it ever. When Kenny is murdered, courtesy of that troublemaking pencil through his forehead, the writing instrument traces a line as his corpse plummets to the ground, prompting Cory’s spicy post-mortem zinger (“We’ll always remember he was that tall”). 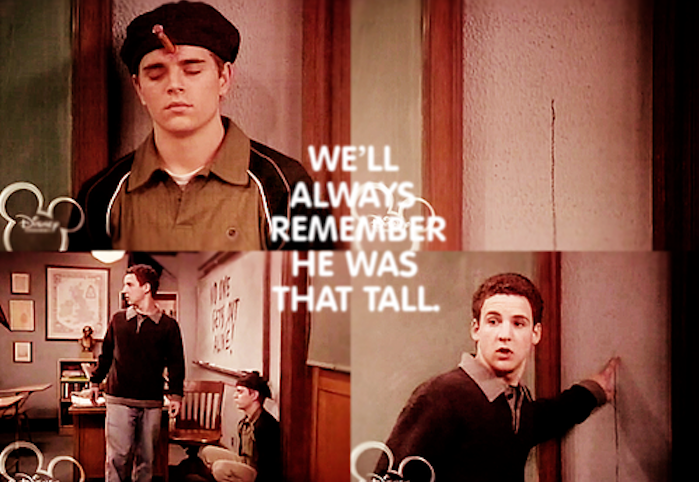 The regular cast’s incredulousness that they would survive brilliantly plays up the disposable nature of supporting characters in horror: “Well, Kenny, it’s certainly not going to be any of us.” Followed up by Eric’s constant references to South Park (“Oh my gosh, they killed Kenny!”). And setting William Daniels (as the stern, wise, but very caring Mr. Feeny) loose to dispense with some funnies is always a welcome sight on my television. When it’s mentioned that Cory and Topanga are no longer together, he responds with a pitch-perfect and droll “Yes, I know. I, too, read Teen Beat, Mr. Hunter” and “This class will not be more interested in the romantic goings on of its students than it is in whatever the hell I’m teaching!”

Since “And Then There Was Shawn” aired in the bloody wake of the post-modern slasher mania brought forth by films like SCREAM and I KNOW WHAT YOU DID LAST SUMMER, the whole episode’s writing is rife with meta madness, which Menell fires off with precision, subverting them to great comedic effect. One element is the stunt casting of LAST SUMMER‘s Jennifer Love Hewitt (here alongside her TROJAN WAR co-star—and boyfriend at the time—Will Friedle) as herself (sort of), playing the new girl in school—Jennifer Love Fefferman. The actress takes the opportunity to play up her burgeoning “final girl” status, engaging in a “scream-off” with Angela (whose piteous loss and backing down once she realizes she’s been outmatched is pretty funny) and uses the occasion to poke fun at herself :

“Well, I like the one with the hottie-hot-hot from Party Of Five.”
“Neve Campbell?”
“Duh!”

There’s Shawn’s constant cataloguing of the clichéd rules of horror films, like pointing out that when you call out a red herring as being the potential killer, said red herring usually ends up dead, in this case it’s the Janitor (played by THE SHINING’s Joe Turkel!). I can’t think of many specifics where this is true, but URBAN LEGEND comes to mind, when the college students call out Robert Englund as a murderer, he does end up dead shortly thereafter. And then there’s the “virgin survives the slasher discussion” in which we learn that Eric and Jack are going to be dead. This prompts them to cheer on Feeny on for getting some before he got killed.

Plus Eric’s attempt to intimidate by using “dun, dun, dun” that old slasher stinger chestnut will never not be funny. Hell, there’s even some solid jump scares to go around while Ray Colcord’s score adequately apes Marco Beltrami’s haunting composition for SCREAM. Naturally, as so many horror films must, it ends with the “it was all a dream” reveal, zipping us back to reality only to punctuate that with a question mark. Now that Boy Meets World is on Disney+, I’d argue that this episode (and really, the series as a whole) is worth a revisit. Sure, the show has its flaws from the beginning—it’s a little too cheesy and sentimental a la Full House—but once the show finds its footing, it succeeds as a show that’s full of heart and humor that remained solidly consistent right up until its last episode.