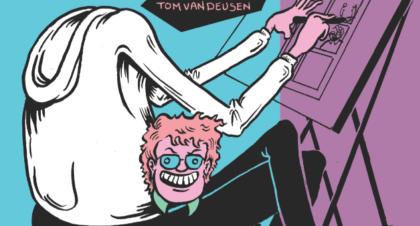 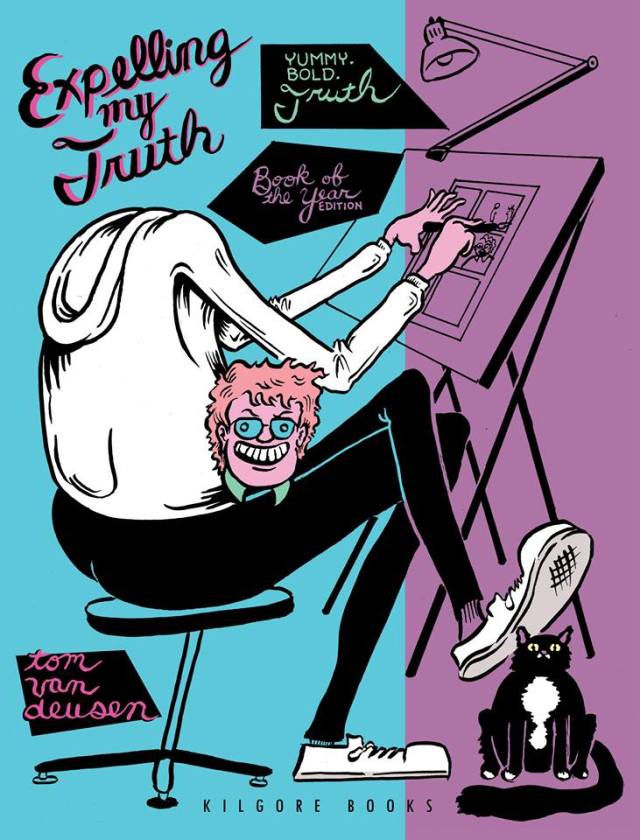 It’s no secret that I’ve always considered Tom Van Deusen to be one of the funniest cartoonists working today — but that’s selling him a bit short, I suppose, considering that he’s also one of the most interesting.

Hiding under the modern iteration of fairly classic comic-strip style illustration that he employs is something that’s almost post-postmodern, an exploration of identity and the perception thereof that see-saws back and forth between making Van Deusen look as outrageously asinine as possible in one book (Scorched Earth), gluttonous as hell in another (EatEatEat), and good-natured-bordering-on-bemused in the next (I Wish I Was Joking). All of which leads this critic to ask the questions : Will the real Tom Van Deusen please step up? And does it even matter if he does?

His latest collection from Kilgore Books, Expelling My Truth, seems as though it may come close to answering the first query, but it goes a lot further toward answering the second — and the answer it gives is “no.” 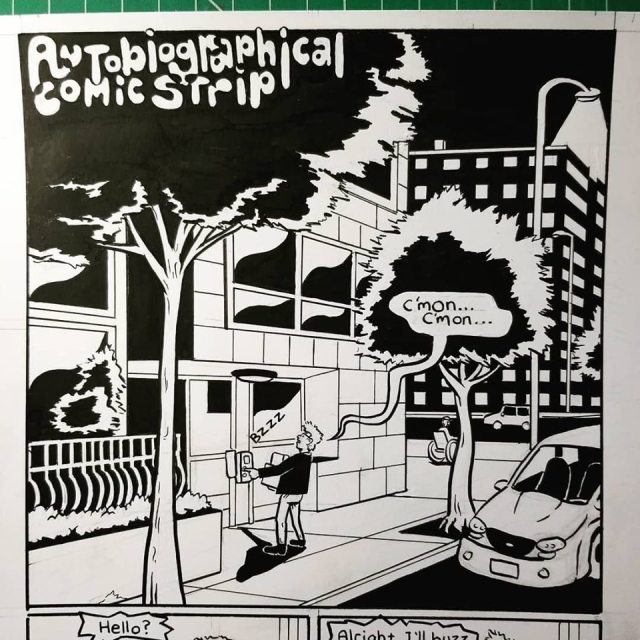 Which isn’t meant as a criticism in the least, mind you — never knowing which Van Deusen you’re going to get  is a big part of the (here’s a term I’m loathe to invoke, but damn if it doesn’t apply) charm of these purportedly “autobiographical” strips, whether we’re talking about a guy with no sense of personal boundaries whatsoever, as in the story where he asks to hold a complete stranger’s baby on the bus before getting off, walking a couple of blocks, and spying on Eddie Vedder’s house (wherein the “rock god” is getting high with a space alien), or one who isn’t above taking easy pot-shots at the pretentiousness of the art world, or one who’s as fundamentally disappointed by his lot as a workaday office drone as anyone in their right mind would be, even (maybe especially) when he’s summoned to the home of his Jeff Bezos-esque boss in order to, unbeknownst to him, talk his son out of a career as a comic book artist. They all entertain, sure — but they’re all cringe-worthy in their own way, as well. So no, it doesn’t matter which Van Deusen we’re getting, at the end of the day they’re all conscripted into service as representations in microcosm of the cartoonist’s least-enviable personality traits.

This is a trickier thing to pull off than it sounds on paper — self-deprecation is easy enough, but to form a one-man circular firing squad in a way that eschews both irony for its’ own sake and the subtle “soft sell” of “I’m making myself look like a bad guy in order to garner sympathetic reactions of the ‘no, you’re not, I promise’ variety” takes some pretty considerable skill indeed. 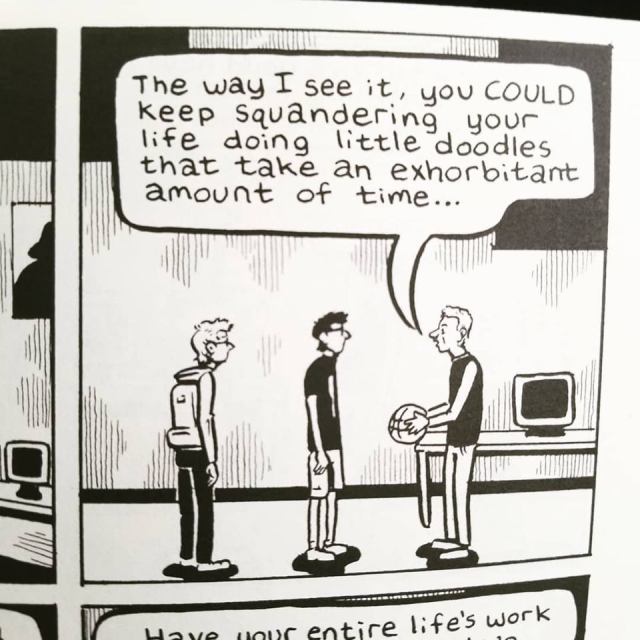 Not that anyone really doubts Van Deusen’s skills at this point — his classical brush line, Jason Lutes-like usage of blacks, and clean, easy-going figure drawing belie a keen understanding of the medium, and even a fairly healthy measure of respect for its history. Re-inventing the wheel is nowhere on the radar screen, but it certainly doesn’t need to be — knowing what you’re good at and proceeding according to your self-diagnosed strengths is plenty effective, thanks, and goes some way toward lending work of this nature with a disarming quality, imbuing readers with a sense of the known and familiar before going in and shaking things up, perception-wise, on a fundamental level. 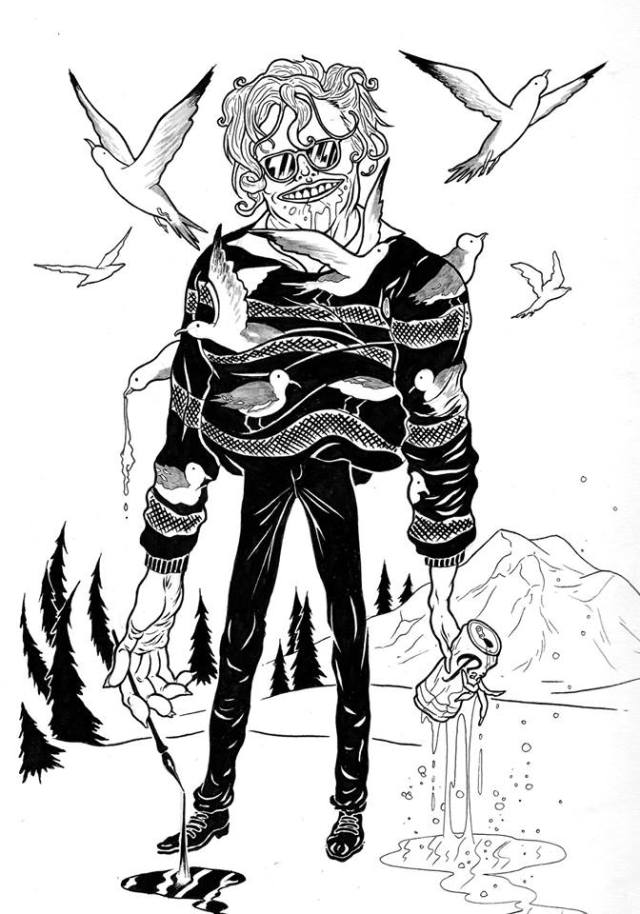 Which certainly doesn’t preclude this comic from, again, being a very fun one. But it’s “fun” with a sense of purpose, with a point of view (in fact, several of them), with a cutting edge that makes you feel decidedly uncomfortable as you chuckle out loud. I don’t know if we’re any closer to discerning the “truth” about Tom Van Deusen at the end of this book than we were at the beginning, but I’m not choosy: Any of these versions will do in a pinch, and even though they’re all off-putting, they sure won’t put you off the comic itself — anything but. Expelling My Truth is thoroughly enjoyable bullshit that says quite a bit about its author even as it does its level best to conceal who he “really” is.

“Unbelievably realistic” only sounds like an oxymoron. Here’s all the evidence of that you’ll ever need.

And check out more of his work on DG: 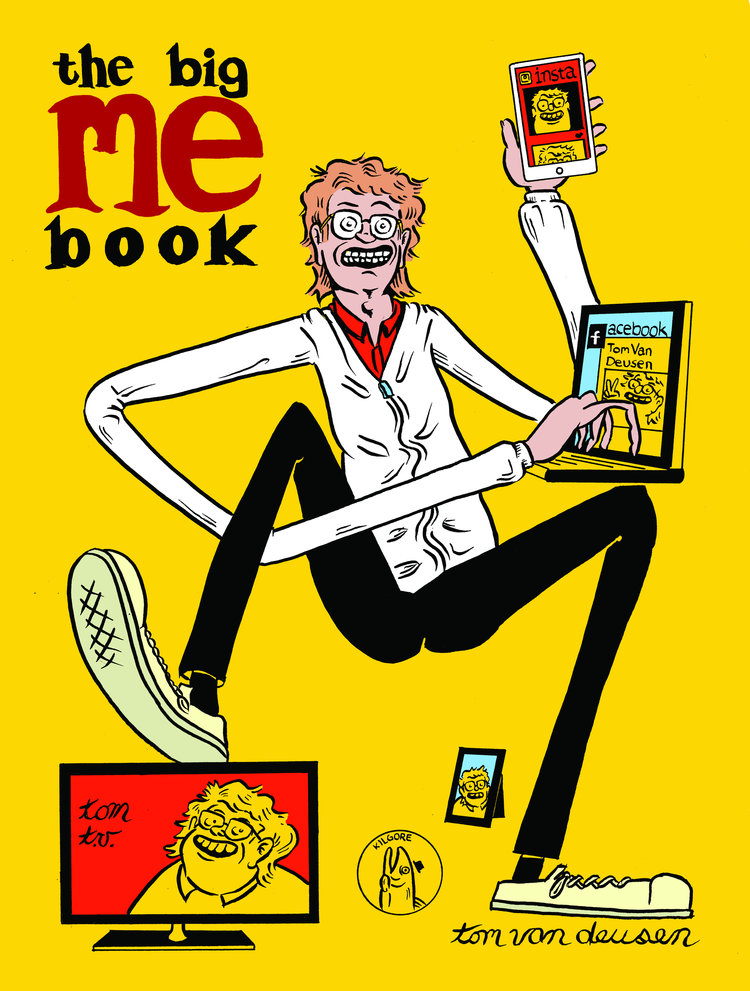 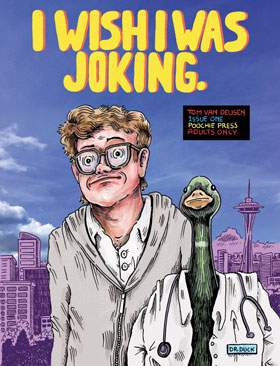