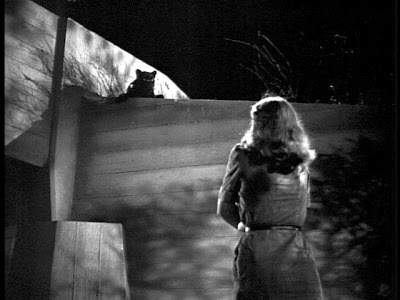 In the early ’40s, RKO Pictures teamed producer Val Lewton with director Jacques Tourneur for three economical (read: low budget) horror movies. The studio gave them three titles, none of which particularly appealed to either filmmaker, but they dutifully soldiered on and gave the productions their all. They started with CAT PEOPLE in 1942. The next year saw the release of the other two: THE LEOPARD MAN and I WALKED WITH A ZOMBIE. Behind those lurid titles are three of the most atmospheric scare pics of the decade, far outstripping the bigger budgeted efforts of the other studios, my love for the Universal Studios Monsters not withstanding. 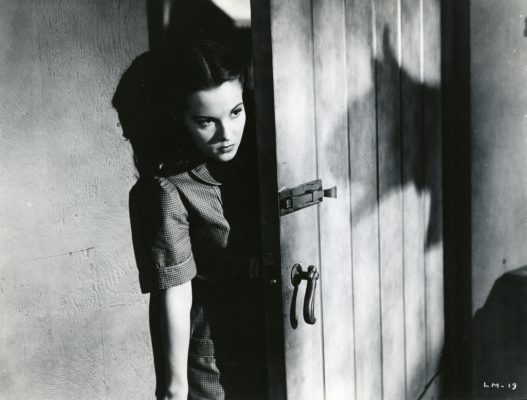 The least known of the three is probably THE LEOPARD MAN, although this horror fan had read about it as a kid in Famous Monsters of Filmland magazine–specifically one particular scene. I spent years trying to track it down when watching movies on demand was still pretty new and some movies could be very hard to find. I did finally manage it, but it was sometime in the ’90s. Thankfully, finding movies has gotten much easier, and Scream Factory has just released THE LEOPARD MAN on Blu-ray.

In a small town in New Mexico, performers Kiki (Jean Brooks) and Clo-Clo (Margo) (and no, I’m not kidding about those names) vie to be the top performer in the local club. Kiki’s slick pal Jerry (Dennis O’Keefe) comes up with a unique idea. He hires a leopard from local Charlie (Abner Biberman) and has Kiki walk out onstage with it as Clo-Clo is still performing. Predictably, Clo-Clo is not too keen on the idea. Perhaps less predictably, rather than run off, the castanet wearing dancer goes after the big cat, scaring it badly enough that it slips its leash and injures a patron escaping into the night. 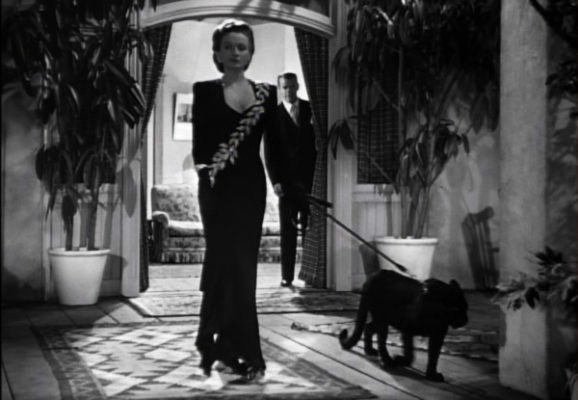 Jerry–who never seems to be worried about anything–shows only minor concern, sure that the leopard will soon be caught and returned to owner Charlie. But then a local girl running an errand for her mother later that night runs into the frightened but dangerous animal and is killed.

The townspeople put together a hunting party to go after the killer cat, and a guilt-ridden Jerry joins in. They cannot find the beast in or around the town, though. The hunt continues, but shortly after another woman out alone at night is killed, again seemingly by the leopard. But Jerry isn’t so sure. The circumstances surrounding the second attack were completely different from the first, and Jerry thinks that there might be a human killer involved; one who is using the escaped leopard for cover to savagely slash a woman to death. Whether human or feline, the killer must be stopped before he kills again. 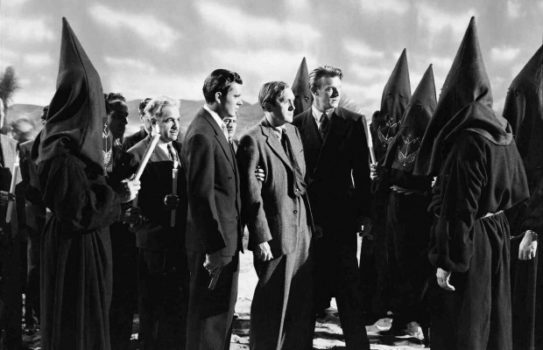 Spoilers ahead! While I won’t give away everything, I am going to have to provide more info than I normally would in order to go over the film.

RKO had made a lot of money from the release of CAT PEOPLE the previous year, and they certainly hoped to repeat that success with this movie, even though they are quite different in all ways except mood and tone. CAT PEOPLE actually had a young woman ostensibly turning into a cat creature and killing (though in true Lewton/Tourneur fashion, this is never actually shown on screen). So, despite the title here (which RKO certainly hoped would draw in fans of the earlier movie looking for the same thrills), this is a horror movie with a strictly human killer. There is no “leopard man” although the big cat’s owner Charlie is referred to as such a couple of times during the picture. 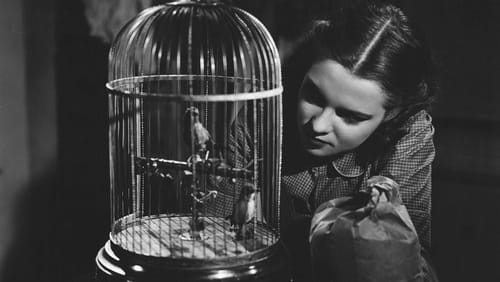 The idea of a serial killer had not been explored much in film before this, and indeed, that phrase is certainly never used here, even though the very idea of a person psychologically driven to kill at random gives this movie one of its distinctions.

As with all Val Lewton productions, the low budget is used beautifully. The entire movie is shot on soundstages and the RKO backlot, with more filming inside a soundstage than you might first believe. The arroyo seen a few times, with a railroad bridge across it, for example, is a beautiful piece of exterior set design that is inside a stage. Even a passing train on the bridge that provides a key moment in a suspense sequence is faked with only lights, wind, and the sound of a locomotive added in later.

Director Tourneur keeps things moving pretty briskly for the 66-minute runtime, with his usual panache in presenting the suspenseful set pieces. The story comes from the Cornell Woolrich novel Black Alibi–adapted to screenplay form by Ardel Wray (who also wrote I WALKED WITH A ZOMBIE for Lewton and Tourneur). You can see Woolrich’s fingerprints all over the movie, with a flawed leading man who is taken to task for treating everything lightly and not caring enough to the dark psychological traumas of the killer and their choice of victims. 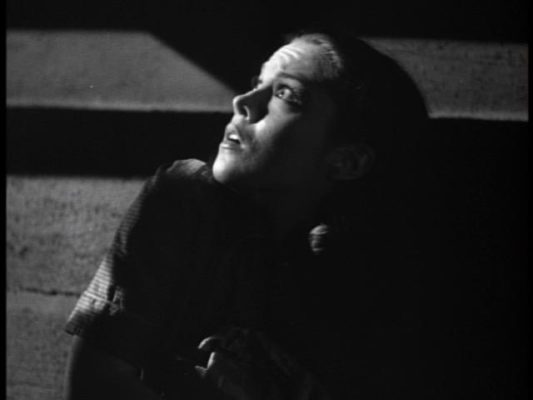 The actors are all fine, though Tom Conway–who’d previously appeared in CAT PEOPLE and who would star in I WALKED WITH A ZOMBIE–is curiously absent (and missed) here. O’Keefe is an okay lead, but a little bland. Jean Brooks is also a tiny bit vanilla, and at times might remind you a bit of Noel Neill who played Lois Lane from the ’50s Superman TV show. The singularly named Margo is the standout in the cast, playing a character who’s not particularly likable but holds the screen well. You might want to clamp down on her castanets before very far into the picture though. It’s also nice to see Biberman playing a significant role here since he was usually relegated to thugs, henchmen, and ethnic villain parts.

The new disc–a 4K scan from the original negative–looks absolutely gorgeous. The crisp black and white cinematography from Robert de Grasse is beautifully reproduced here. Film grain is present but not overwhelming, and the blacks in the frequent night scenes are deep and solid. There are a couple of commentaries included. The first is by filmmaker William Friedkin, who clearly really loves the movie. It was recorded for a 2005 DVD release and has been ported over for this new release. It’s a fine listen–it’s always interesting when you can hear from a master filmmaker like Friedkin. He does provide some background information, but I almost think of this commentary as more of a tone poem, with the director speaking to the filmmaking process and how much Tourneur was able to achieve with the resources available to him. He calls the most famous suspense sequence one of the most frightening in film history. It really is, too. I’ve avoided referring to it too much in the interests of keeping it fresh for anyone who hasn’t seen the picture. It is pretty marvelous though. 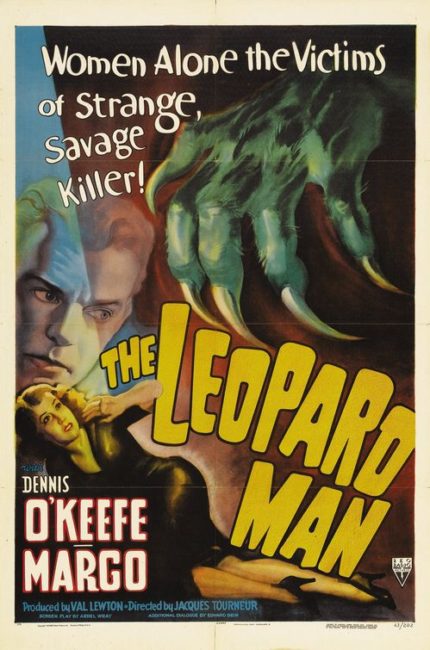 The second commentary is a brand new one recorded for this release by film historian and Val Lewton biographer Constantine Nasr. He provides an informative presentation that covers everything from Cornell Woolrich and the source novel through the production and release of the film. I will give Nasr one demerit for a lengthy reading of what seems to be an entire letter Lewton wrote to his parents which bogs the commentary down a bit in the later reels, but otherwise this is a good feature.

THE LEOPARD MAN is one of the most atmospheric horror movies from the ’40s. Having it beautifully presented on Blu-ray with two worthwhile commentaries make this a safe bet for film buffs. Recommended.