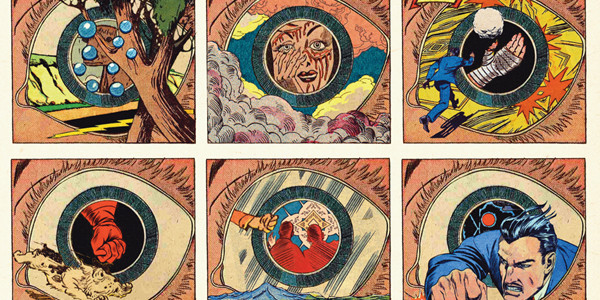 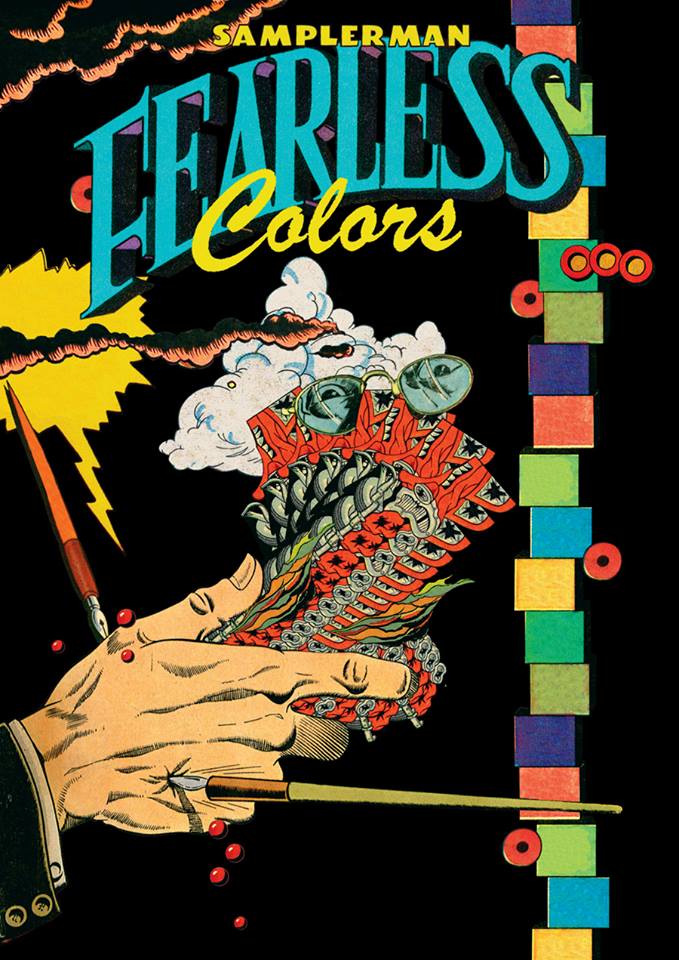 French cartoonist Yvan Guillo, better known under his nom de plume of Samplerman, has a technique like no other — and it’s one that leaves me in a real quandary. Digitally manipulating pre-existing (primarily Golden Age, and most likely all public domain) comic book illustrations into hitherto-unforeseen, and uniformly bizarre, new shapes and formations and probably even realities is the part I “get,” but what sort of artist does that make Mr. Samplerman? Or, perhaps more specifically, what sort of art is it that he’s making? Is it “found” art? Is it “Pop Art”? Is it collage? Is it Lichtenstein- or Warhol-esque appropriation/theft?

Eventually, I settled on — re-mixing. What do we all think of that?

If his recently-issued collection,  Fearless Colors (co-published by Kus!, Ediciones Valientes, and MMMNNNRRRG) proves one thing, it’s that some sort of musical comparison is in order, because while the “strips” in this book are a product of modern technology, there’s actually a fair amount of improvisation that not only informs this work, but in a very real sense forms its backbone. I’m not sure whether or not Samplerman “plots out” what he’s going to do in advance — I suppose to some extent he must — but if so, his “stories” are more the result, it seems to me, of teasing out hidden elements in disparate materials already at hand than any sort of overt searching out of specific details, themes, or even similar visual cues. But who knows? I could be entirely wrong. 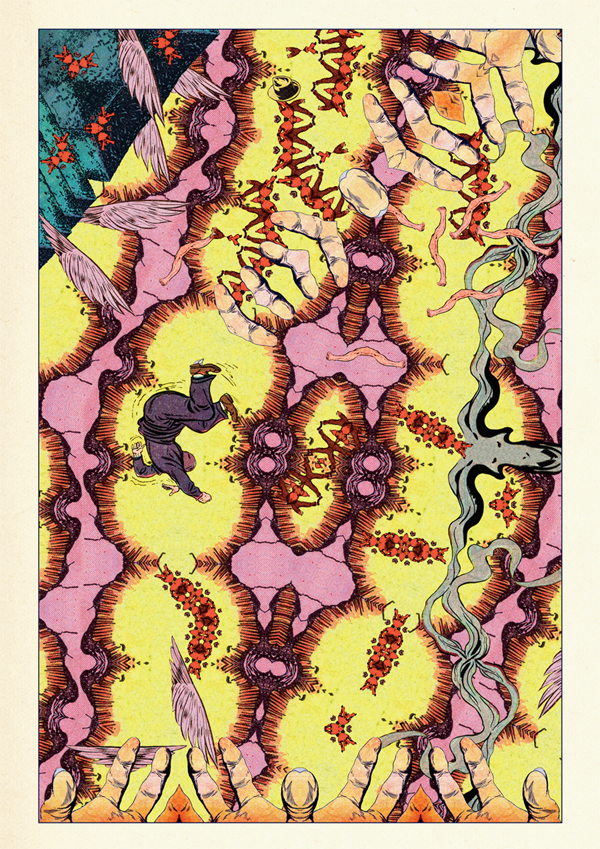 In any case, the results are entirely unlike anything else out there, and perhaps the most amazing thing about whatever it is that Samplerman is doing is that it never seems to get repetitious or boring. Prior to scoring a copy of this book, my only exposure to his work was in smaller “chunks” in various anthologies, and while it never failed to impress — hell, even inspire a fair degree of awe in — me, I figured that any long-form exposure to it would necessarily yield diminishing returns. After all, how many times can a guy essentially do the same thing and keep flabbergasting readers with it?

As it turns out, he can apparently do it a lot. And the more I think about it, the more that makes sense — I mean, the whole idea of comics as a medium continues to fascinate and enthrall people, and just as there’s no hard and set “limit” to what can be done with words and pictures in juxtaposition, there’s no “limit” on what can be done with words and pictures that are already extant, right? As long as there’s one comics page out there in the world, there’s a page that can, theoretically, be given the “Samplerman treatment.” 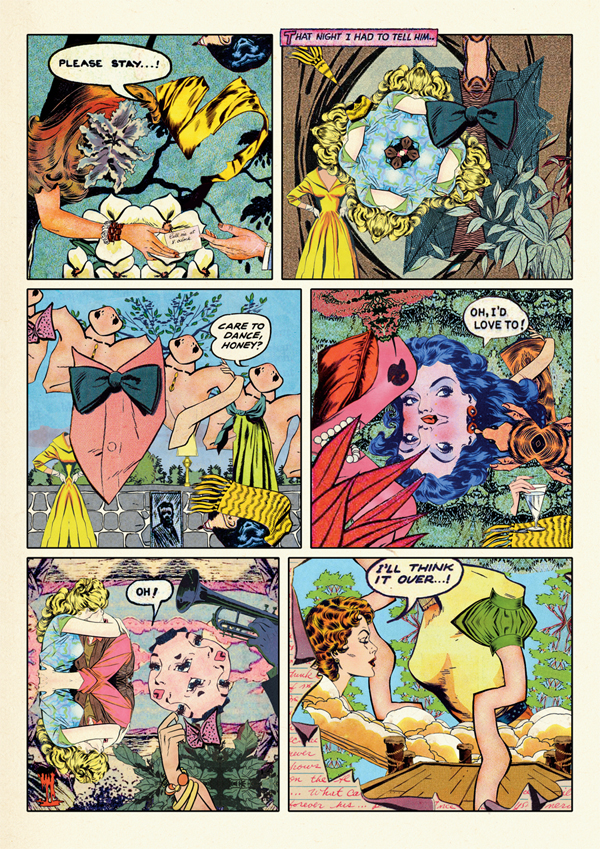 Another interesting, and welcome, surprise : despite the fact that these strips appeared in a number of publications over a three- year period (2012-2015, if you’re curious), they’re presented in a “running order” (hey, another musical reference) that gives them not so much (okay, not at all) a sense of narrative, but at least of visual, momentum — there’s a unique and entirely-accidentally-arrived-at rhythm and flow to this work, both within the individual selections themselves, as well as in their overall assemblage, that mimics something akin to storytelling in the same way that the images mimic, and distort, the pages they’re “sampled” from. The overall effect is not unlike what one would probably achieve if they tore (or, better yet, cut) up some old comics to tiny shreds and dropped them into the business end of a kaleidoscope.

So, where does this “momentum” I mentioned come from? Purely from Samplerman’s unmatched ability to absolutely obliterate the concept of “expectations” on even a conceptual level. By taking a bunch of geriatric stories that were no doubt predictable and formulaic in the extreme, fucking with them mercilessly in Photoshop or some related program, and intuitively positioning the results in a manner that draws in both the eye and the imagination, he’s created something utterly unique unto itself : a book where you literally never know what’s coming next — chiefly because you don’t even know what you’re looking at now. With all this in mind, then — and breaking our pattern of musical analogies (hey, I can do this “unpredictable thing,” too!) — I have no hesitation in labeling Samplerman “the William Burroughs of comics.” 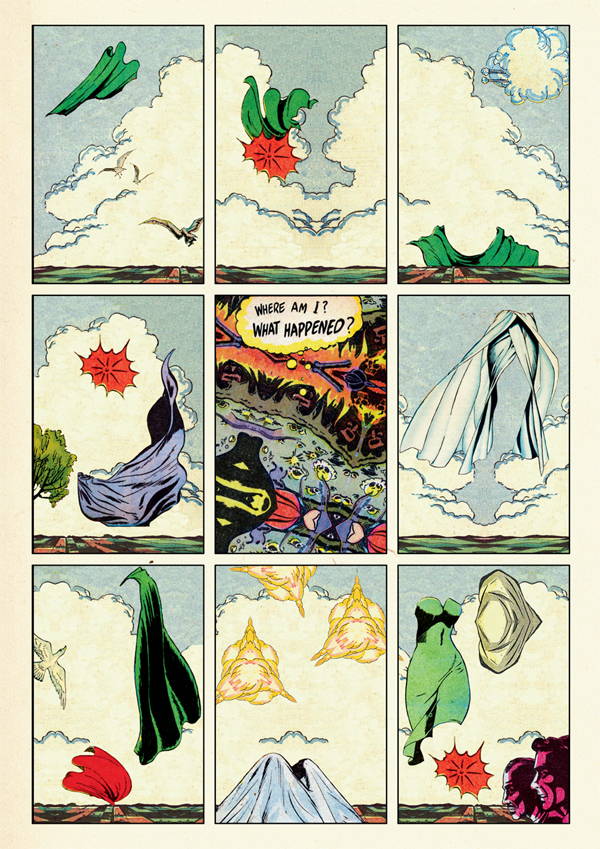 Honestly, though, all my blathering aside, Fearless Colors is something you really need to see, to experience, to process for yourself, and on your own terms. I can imagine this book “hitting” each reader in entirely different ways, and no doubt it will mean something different to each of them, as well. Even if it doesn’t sound like the kind of thing you’d dig, you literally cannot make that decision without, at the very least, checking it out — and once you do, my bet is that you’ll be damn glad you did. It can be ordered directly from Kus!, with shipping included free, at https://kushkomikss.ecrater.com/filter.php?a=1&srn=0