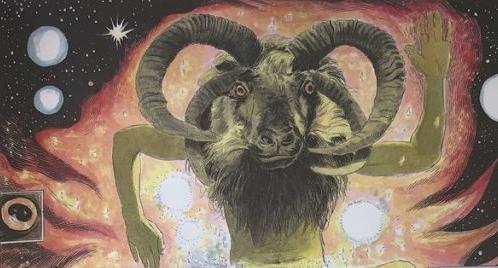 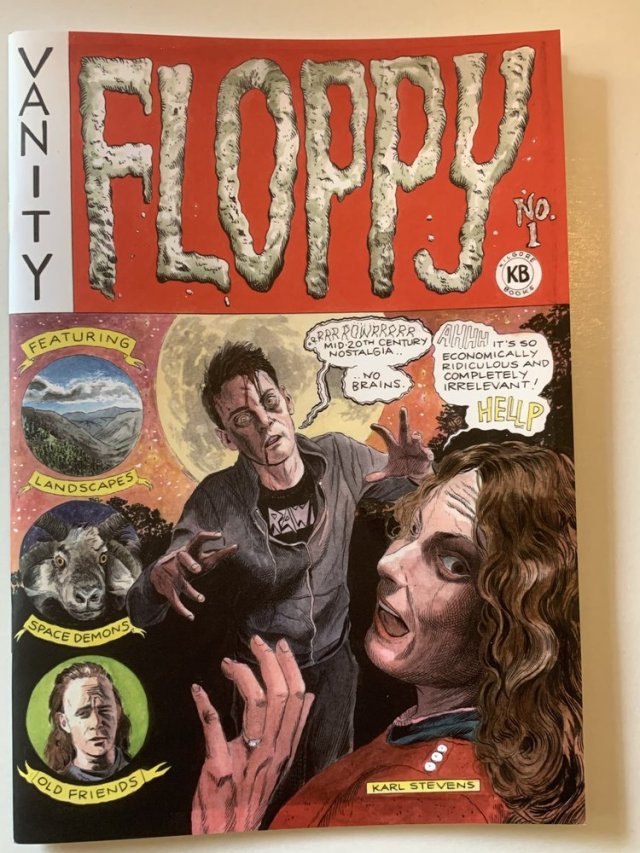 As a follow-up to his breakthrough 2018 graphic novel The Winner, illustrator supreme Karl Stevens has chosen a curious project — a deliberate throwback to the “solo anthology” comics of the 1990s, his new (-ish, the first issue came out late last year) Kilgore series, Floppy, is both nostalgic on its face and self-aware in the extreme, as the cover shown above makes plain. So — are we looking at a purely tongue-in-cheek exercise here?

If you know Stevens, you already know that’s not the case, and even though this can strictly be classified as an autobio work, it ventures into the surreal with enough gusto to even call that easy categorization at least temporarily into question. Our guy Karl seems, then, to be looking to cleave more to the template and maybe even the temperament of, say, Peep Show or Yummy Fur, but without anchoring himself to their newsprint corpses.  And who knows? Maybe the time is right for nostalgia that concurrently has at least one of its eyes trained forward. 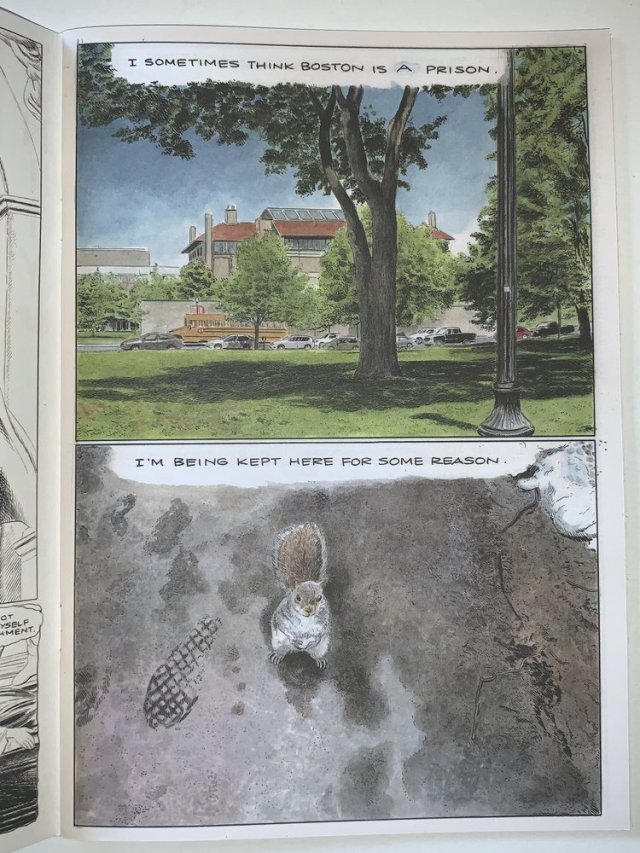 By and large Stevens still keeps his focus on the everyday here, but given that his wife is also quite obviously his creative muse, he finds a way to imbue their days at the beach or nights at home getting high and watching movies with an added tinge of the near-mystical — and when he does veer into the inarguably mystical, best evidenced by an extended cosmic dream sequence, the results are downright breathtaking , and I would argue that it’s in that delicate balancing act of the mystical with the mundane that Stevens finds his voice as a cartoonist, borrowing from both extremes so that one informs the other and, of course, vice-versa. On paper this description may not make a tremendous amount of what passes for “sense” in this day and age, but oftentimes art that strikes a chord does so for reasons that are entirely unquantifiable, and it just may be that by attempting to do precisely that I’m eschewing, even usurping, the whole point of the work here. Any editor worth his or her salt would tell me that I’m undermining my own authority as a critic with that statement, but I’m down for rejecting that entire premise on its face simply because I’ve always viewed the role of a critic as being more advisory than it is strictly authoritative. Or, for that matter, authoritarian. But I digress.

And so back to Stevens. One of the other fascinating things he does in this first issue of Floppy — and something I hope he sticks with — is to dispense with story titles altogether, as well as “beginnings” and “endings.” Yeah, the opening yarn ends on a gag derived from Art Spiegelman’s Maus, but even though the tenor and style changes on the very next page, the effect is one of abrupt transition rather than a “stop” followed by another “start” — subsequent to that, the shifts become much more fluid, and the cumulative effect of reading this comic from cover to cover is that of experiencing an integrated life in all its facets, real and imaginary. This is a gutsy move that could easily backfire on a less-confident cartoonist, but Stevens is firing on all cylinders here and is more than up to the challenge. 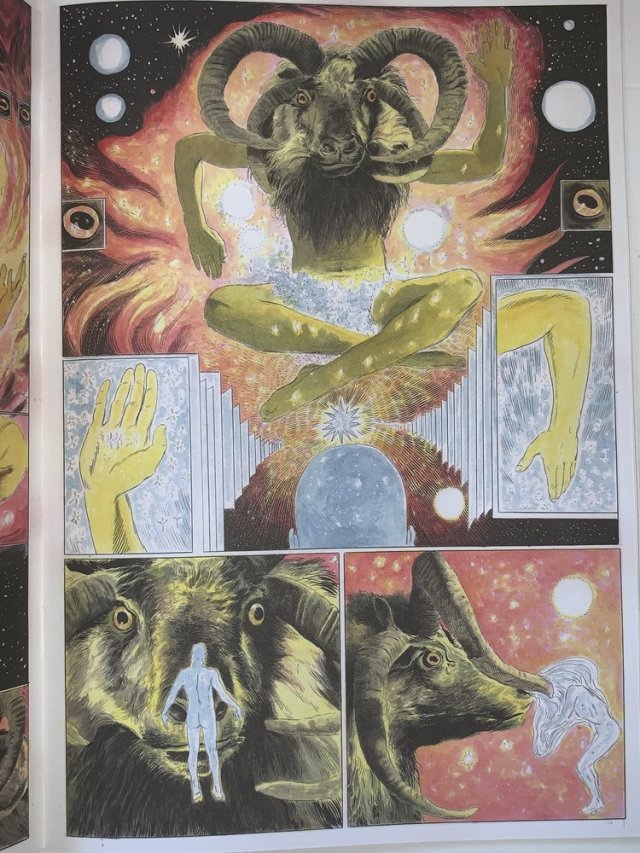 Another wise choice Stevens makes is incorporating the city of Boston as a character in the book, and while that’s hardly new, it’s again something that can seem quite forced in less able hands. In these pages, it lends crucial depth and character to the proceedings, and these stories very much feel of both a particular place and a particular time — okay, except when the action goes to outer fucking space, but even breathtaking as that particular strip is, you won’t mind in the least when Stevens returns to the solid ground of his “real” existence and his home turf. 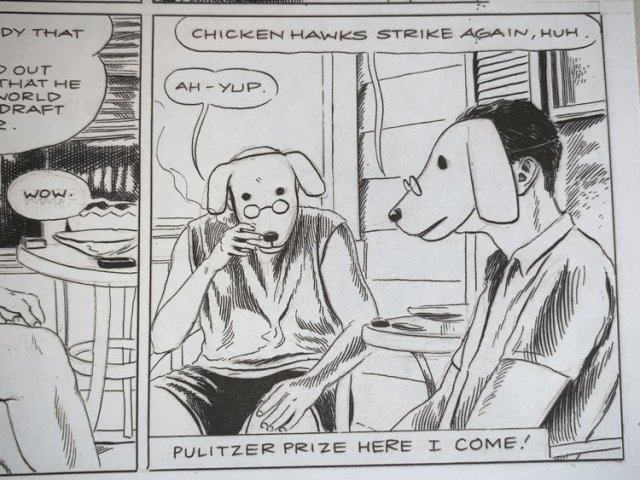 And for my own part, I hope Floppy will prove to be Stevens’ artistic home turf for a good long time to come. Now a fully-formed talent, the limits on this book are only those that he places on it himself, and it would be really nice to have a new “solo anthology” book to look forward to a couple times a year, so — stick with this one, Karl. You may have made The Winner already, but you’re onto a winner here, as well.

Floppy #1 is available for $7.00 from Kilgore Books at http://www.kilgorebooks.com/shop/floppy-1-karl-stevens