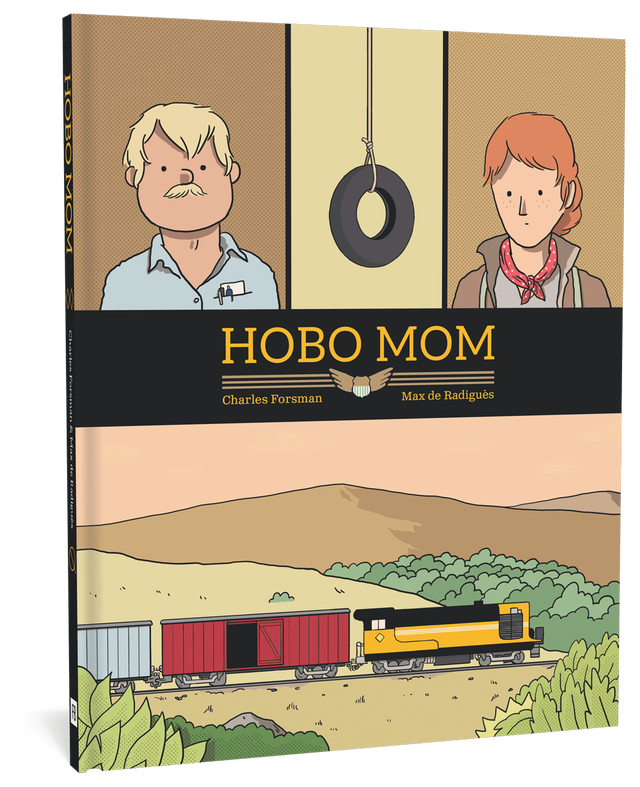 And so the first (arguably) “major” release of 2019 in the “alternative” comics world is upon us — never mind that Charles Forsman and Max de Radigues’ Hobo Mom is actually about five years old and is just now being released in an English-language version, publisher Fantagraphics Books is understandably, given the pedigree of its creators (Forsman’s notable critical and commercial successes including The End Of The Fucking World and I Am Not Okay With This, while de Radigues, who hails from Belgium, is probably best known on this side of the pond for Bastard), giving it the “For Your Consideration” full-court press, but hold on just a second: Its physical dimensions alone clearly mark this as something of an “also-ran” project, seeing as it clocks in at a mere 62 pages, and a significant chunk of those are wordless.

How much storytelling is really going on here, then? The short answer to that is “not enough to warrant the book’s $14.99 cover price,” but the more considered response is probably something along the lines of “more than you’d probably think given its page count and laconic pacing.” Both, as it happens, are true. 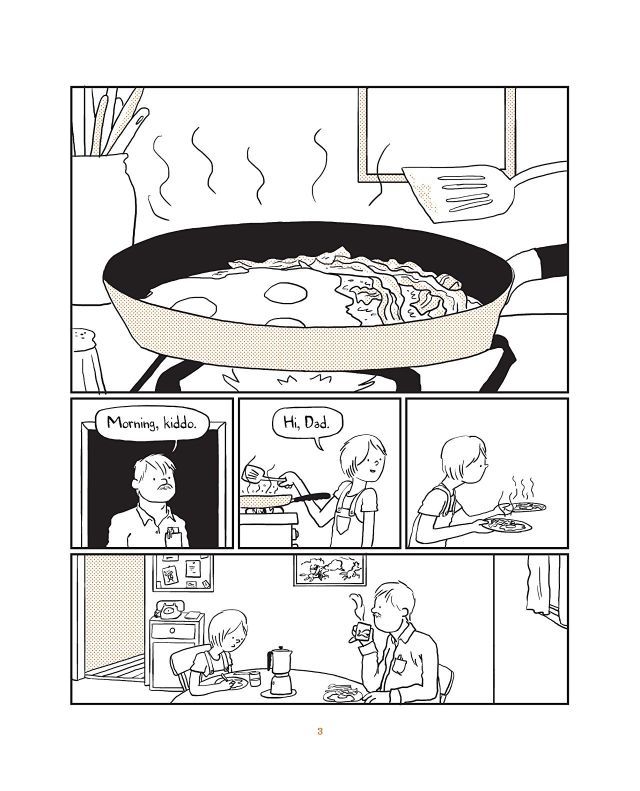 Certainly Forsman and de Radigues take their time and focus on “the little things” pretty thoroughly here, and for all intents and purposes this book plays out in much the same manner as something three, even four times its length would, which is an interesting tack to take in a short-form narrative, but it also betrays a distinctly understated sort of arrogance — if you’ve only got so much space and take your sweet time getting where you’re going, it stands to reason that once you arrive at your destination, you’re going to have to make up for lost time in a hurry. That is, assuming you have something to say with your comic in the first place.

Truth be told, though, I’m not entirely sold on the idea that Forsman and de Radigues do. There’s no harm in a couple of friends wanting to collaborate, of course, and these two cartoonists are certainly simpatico in terms of employing similar “clean-line” drawing styles and deliberately stripped-down narrative techniques, so determining who, precisely, did what here is a pretty daunting, and ultimately pointless, task, so seamless is the end result of their efforts — but a vanity project is still a vanity project, and this bears far too many of the hallmarks of precisely one of those.

Which doesn’t preclude it having some things going in its favor, of course: All three principal characters — titular “Hobo Mom” Natasha, estranged daughter Sissy, and vaguely resentful ex Tom — are drawn in broad but mostly appealing strokes, if not appreciably fleshed out in any significant way; the calculated absence of specific details affords the opportunity to immerse readers in the flavor and character of their lives; the numerous splash pages offset with smaller, single inset panels are an effective, immersive, and reasonably innovative way to key in on the emotions of individual players within the framework of larger, more expansive scenes, or vice-versa.

Trouble is, the story itself is a middling affair that flirts with being completely insubstantial or, even worse, pointless. 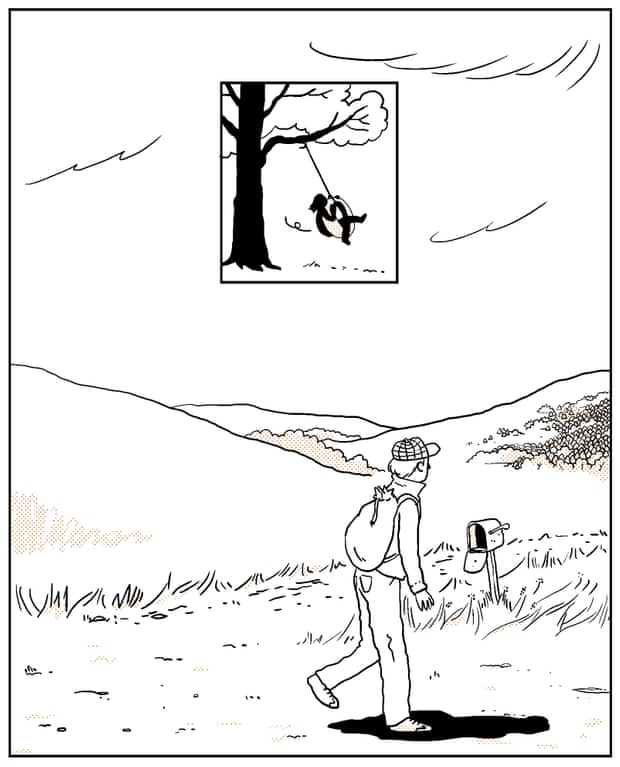 Years back, Natasha bailed on her family for reasons never expounded upon, and now she rides the rails, rather unconvincingly disguised as a man in order to cut off sexual assaults from her fellow hobos at the pass. When one wises up to her charade and does, in fact, try to rape her, a violent altercation ensues that sees her come out the victor, but opt to take a break from the nomadic life and see how the child he abandoned (who’s now probably six or seven years old) is doing. It’s quickly established that she’s fine, her locksmith father is doing a perfectly good job of raising her on his own, but gosh, he’s such a swell guy that he allows Natasha to stick around anyway, and after a little while (truncated time frames are a huge problem here) his bitterness fades and he decides that maybe they could all give the whole “family thing” another go.

Cue the predictable, and suddenly rushed, third act: Natasha begins to feel hemmed in, heavy-handed “every object in the house feels like a small part of an insidiously comfortable trap” imagery clobbering the point home, Tom feels her growing distant, and one day after school he takes Sissy out for a hamburger to allow his once-again-former lover/wife enough time to do what he knows she’s itching to — head for the exit. Only this time he understands. It’s just who she is. It doesn’t mean she loves him, or their daughter, any less.

I’m sorry, but I call bullshit on that. Real love means sacrifice — willing sacrifice. You give up parts of yourself — most notably, yeah, some of your freedom — because you know someone needs you, and you want to provide for their needs. The idea that there isn’t something seriously lacking in the conscience of someone who would run out on their own kid not once, but twice (or, alternately, at least some sort of deep-seated pain or fear that they would do well to address), is as laughably absurd as the notion that it’s going to be a woman who does this when, statistically, it’s almost always guys who are guilty of ditching out without so much as a note. 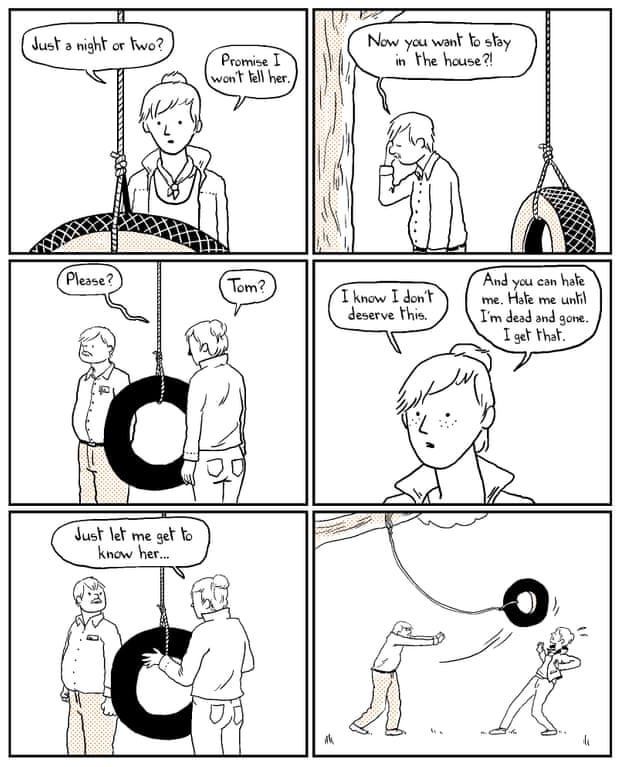 So, yeah, the reasons for this whole exercise? I’m seriously failing to see them. I mentioned earlier that there’s nothing wrong with two friends wanting to get together and “jam” on a comic book, but when the duo in question has no particular ambitions beyond that? Well, that’s a problem — maybe not a fatal one, as if this were packaged in a cheaply-priced, standard “floppy” format it might make for an interesting if deeply-flawed experiment that’s nevertheless worth, say, four or five bucks — but nothing on offer here warrants the hardcover treatment and commensurate hefty price tag. On a purely technical level, then, Hobo Mom has some things to recommend in its favor, but on the whole? You’d do well to hit the road and abandon it.