Home  ⁄  The Wire  ⁄  [THE DAILY GRINDHOUSE INTERVIEW] ROBERT D. KRZYKOWSKI, DIRECTOR OF ‘THE MAN WHO KILLED HITLER AND THEN THE BIGFOOT’

THE MAN WHO KILLED HITLER AND THEN THE BIGFOOT is a thoughtful, understated film masterfully written and directed by Robert D. Krzykowski. The film starts Sam Elliott in a role it feels he was born to play, that of Calvin Barr, an aging veteran haunted by loss and regret. Despite being plagued by these memories, Barr was instrumental in killing Hitler, an almost mythical evil being, and thus has been recruited by the government to kill another mythical creature, a Bigfoot spreading plague in northern Canada. DAILY GRINDHOUSE got the chance to talk to writer-director Robert D. Krzykowski about this unique film. 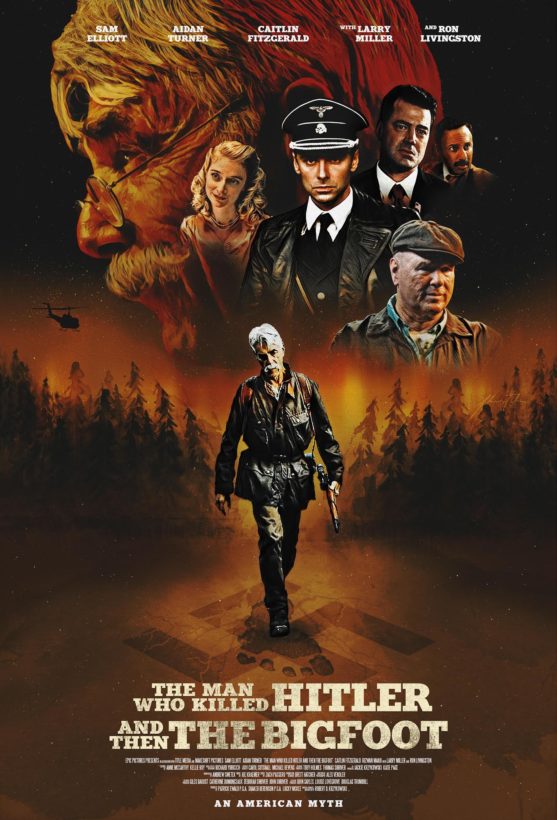 Daily Grindhouse: How did this idea come about?

Robert D. Krzykowski: It started as kind of a folk adventure, and as I wrote the script, it emerged as more of a character study, and more of a piece about fear and loss and regret, and I felt that the two killings in the puzzle could have a more mythic aspect to them. The killing of Hitler being a real person, and he was a monster, and later in the wild he confronts the Bigfoot which is mythic but also a monster, and they’re each carrying a plague in a different way. Where Hitler has a plague of ideas, and then the Bigfoot is carrying a literal plague. So the script kind of developed as I wrote this character, I started to discover who he was, and some things that just happened to be violent. Asking those questions, I think I just wanted to answer them through a character who had some of these frailties and fears.

Daily Grindhouse: How did you balance the flashbacks in the story with the present tense?

Robert D. Krzykowski: Within the script we tried to write elegant transitions that would take us from 1987 to the 1940s, and tried to do that in a way where it felt almost like waves going in and coming out, a cleanness to it so the audience wouldn’t feel like they were constantly being pulled in one direction or another. Also casting two people, Sam Elliott and Aidan Turner, who felt connected in some ways. We wouldn’t want each one of them to impersonate each other, we just wanted them to be spiritually connected so it feels like this character grows into Sam Elliott’s character. So in the edit, it’s just about certain transitional visual effects or tricks, or transitions that felt like they created a lot of smoothness, where the two timelines wouldn’t be jarring to the audience. It was just looking for the balance in the edit. 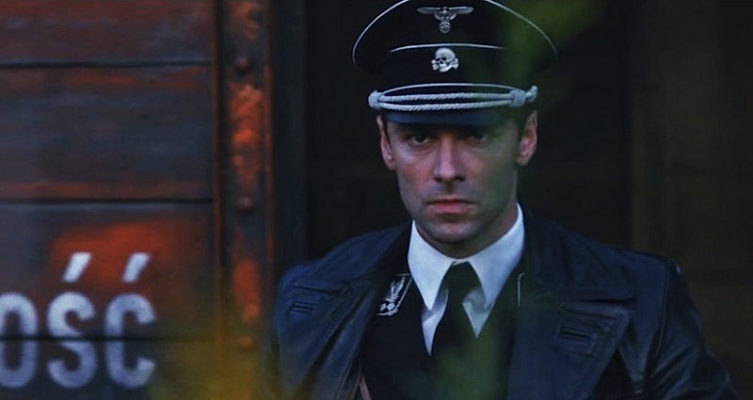 Daily Grindhouse: The Bigfoot creature did not seem that typical. How did you create that creature design?

Robert D. Krzykowski: Well, we’ve seen the big hulking Bigfoot that’s eight feet tall and broad, and it can sometimes look a little silly and scary, but I wanted it to be more a mirror of the hero, so I made him the size of a man, and he’s lithe and thin and haunted and lonely and sad. And we wanted him to be innocent, he’s not prone to violence, he doesn’t like to be near other beings and so it’s the hero who’s eventually going to make this thing extinct. I wanted the hero to see something of himself in that creature, so the creature design leans into more of the way you’d do things in an old-school Universal movie monster, where it’s a man in a suit. More even like the apes in 2001: A SPACE ODYSSEY. I’m going for a more simple approach, where there’s an actor and that actor’s name was Mark Steger, playing that part so that he and Sam could have a real actual interaction on set. And the design was influenced by John Gardner’s Grendel, which tells the story of Beowulf  from the perspective of the monster. Everybody likes those beautiful illustrations for Mary Shelley’s Frankenstein, or of Lord of the Rings with Gollum. Those were all kicking around in my head, and Spectral Motion was able to implement those ideas as a team in the design of the creature.

Daily Grindhouse: Why do you think Calvin ultimately decided to go on the Bigfoot hunt, when he resisted at first?

Robert D. Krzykowski: I think he was probably thinking about his brother, and his brother’s family, and he yearns for that connection. He knows what he doesn’t have, and what he doesn’t have is everything that his brother has, and I think that they look up to each other in different ways. I think when he calls his brother, he knows these are the type of people I protect, this is what I do with my life. I exchange myself in the service of others. And I think his call to action was not something he was able to ignore, even though he had no interest in killing something. I think in this case he was gonna go make this innocent creature extinct, so that would carry an enormous weight with it.

Daily Grindhouse: Did you see the film as a statement on aging in some way?

Robert D. Krzykowski: Yeah, I think our common enemy is fear and loss and regret, and the more that those things grow in us over the years, I think the more we lose something of ourselves. I wanted to have a character that shares our common frailties, and a hero, though he’s incredibly able and capable, where the biggest thing is failing, and feeling lost, and striving for the things we all are striving for. Getting older and looking back with regret and trying to make a statement about hope, and that there is hope at every stage, and the actor Sam Elliott, he brought that hopefulness and he brought that yearning in a really special way.

Daily Grindhouse: Sam Elliott is so well-suited to the main role. Is he someone you had in mind when you were writing it, or when you were casting it?

Robert D. Krzykowski: I don’t know if I ever had him in mind, I never considered Sam for it, but I have a background in illustration, and I was drawing hundreds of storyboards and conceptual designs, and they look exactly like Sam Elliott, with the bristlebrush mustache and the hair. He kind of reminds me of a Norman Rockwell caricature. So it was there spiritually, and when Sam’s name entered the mix of people we were thinking about, it became incredibly obvious to me that this movie might only work if it was Sam Elliott. And the fact that he said yes, it came to me that this could actually work. 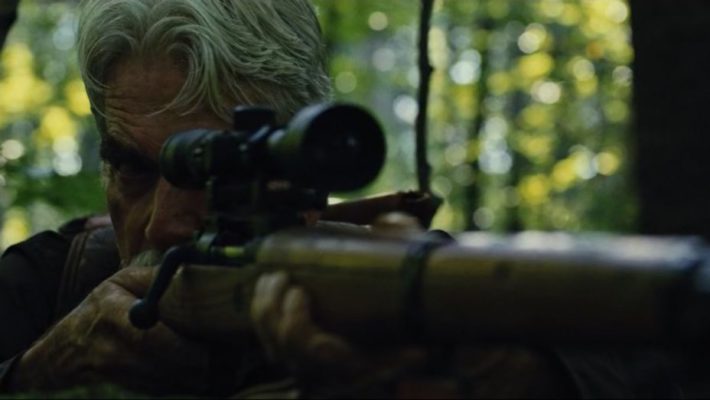 Daily Grindhouse: What was the significance of the box in the movie?

Robert D. Krzykowski: I felt that it was important to leave a couple of things for the audience. My favorite movies are movies where you’re a participant, and not just passively watching the movie. So there’s a few mysteries in the movie, and some of them get solved. But when it comes to the painting on his wall, the box, I wanted them to seem like they kind of had a magical realism, where they’re connected to the weight he’s carrying around. And the painting is prophetic of where he’s headed, this ultimate confrontation with Bigfoot. And the box is more of a mystery. I believe it’s connected to that thing. But it’s something he’s not quite ready to confront, but he’s getting there. And I hope the ending of the movie is felt as a sign of hope for this character, and for all of us who have these feelings of loss and pain that we’ve felt in our lives. And I feel like that’s common for everyone, for some people more than others.

Daily Grindhouse: Was the film in any way a commentary on the military, and how it can change people?

Robert D. Krzykowski: I think it’s a commentary on PTSD, certainly, and the notion that a soldier is serving others. And that something is exchanged when we serve other people. That can extend to a teacher, a nurse, someone who works many, many hours to support their family. There’s a whole lot of ways a human being can serve another human being that are completely selfless. And I wanted this character to be selfless, and I felt like that was something worth celebrating and commenting on. So it’s not just soldiers though, I used the example of a soldier in this movie. It’s all sorts of people who exchange their lives in the service of others and I think that with these people we’re highlighting what they’re doing and the toll it takes on them because they do it in a quiet and humble way that doesn’t necessarily seek recognition.

THE MAN WHO KILLED HITLER AND THEN THE BIGFOOT will be available in select theaters and VOD on Friday, February 8th, 2019.