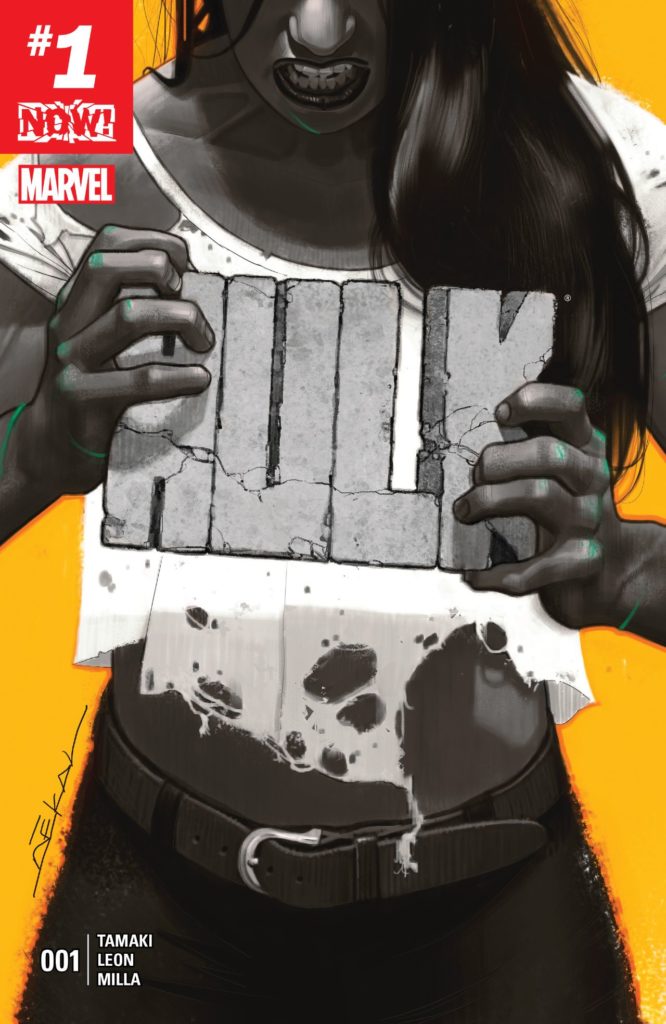 Whatever you do, please — don’t call her “She-Hulk” anymore!

In the aftermath of the near-universally-panned (and not without good reason) Civil War II, Jennifer Walters is feeling even less herself than usual. Her cousin, Bruce Banner, is dead (for now, at any rate) and she’s recently spent a fair amount of time comatose, herself (as did most readers, but that’s another matter). So, with no “incredible” Hulk left, the now-adjectiveless mantle belongs to our gal Jen. Except — she really doesn’t want it. And she’s doing anything she can to remain calm and prevent her transformation from triggering. Her “mellowing-out” habit of choice? Watching YouTube cooking videos. I’d get downright sleepy, myself.

Oh, and she’s going back to the lawyering thing, taking on a new gig at a firm that primarily represents super-hero clients. That could be interesting, I suppose. Unfortunately, nothing else about Marvel’s new Hulk #1 is. 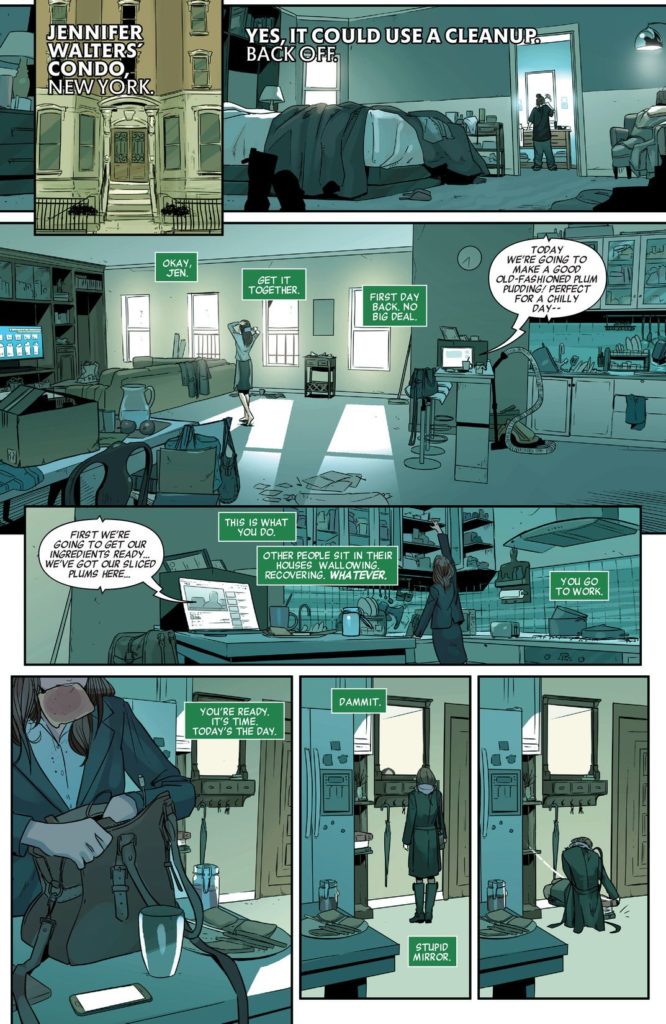 Credit where it’s due: Nico Leon turns in some really nice, clean (if somewhat antiseptic) art on this first issue, and colorist Matt Milla is having all kinds of fun playing with various green tones (meant to hint at the inevitable, I suppose) in his color palette. But the tonal shift from the last few She-Hulk-centric titles to this one shows everything wrong with Marvel Now! circa 2016 in a nutshell: this comic just isn’t every fun, and almost nothing happens in it.

Granted, Jen has any number of good reasons for being a basket case these days, and for doing everything in her power to keep her alter-ego in check. She’s had a rough go of things lately. But seriously, when I say “in this issue she starts a new job and gets her first client,” that really does pretty much sum up the plot. Sure, there’s something weird about said client (besides the fact that she looks like Marina from John Byrne’s old-school Alpha Flight series — and who knows? Maybe that’s who she is), but it’s not like whatever mystery writer Mariko Tamaki has in mind for her is given anything like a gripping, or even mildly curious, introduction, and so the final-page cliffhanger? Yeah, it falls a little flat. And I honestly have to wonder how fans are gonna react to not seeing Jen transform into her green-skinned “better half” at all in this debut installment. A Hulk book starring She-Hulk? People can probably — or maybe that should be hopefully — get behind that. But a Hulk book with no Hulk in it at all? Even for a page? Can you say 70% drop in Diamond orders for the second issue? 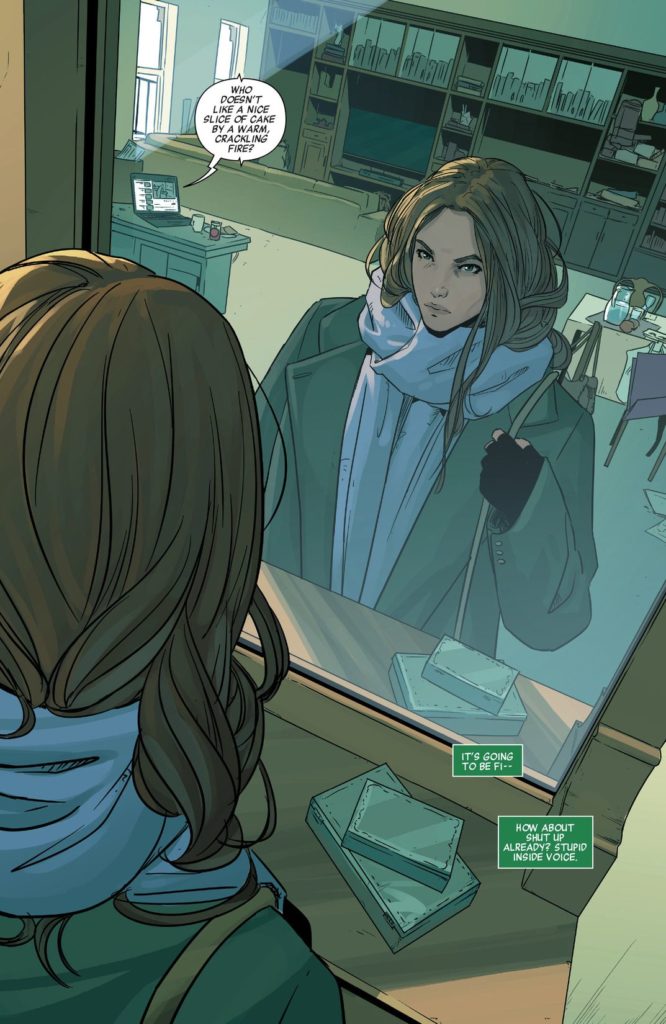 I’m sure Jeff Dekal’s striking cover is going to be more than enough to entice some folks who were “on the fence” about this series when it was first solicited to give issue one a shot, but honestly, the storyline here is basically daring you to stick with the book, and offers prima facie evidence for the argument retailers are making (one which seems to be falling on deaf ears so far at 135 West 50th Street, but that’ll change soon enough) that this latest round of Marvel Now! is a loser. Second-tier characters thrust to the front of most major series while the few “A-listers” who do remain are shunted off into unpopular story arcs that see their powers, stature, or both reduced? DC tried that about 18 months ago with DC You, and in less than a year they were re-booting their entire line with Rebirth and embracing “back-to-basics” as the model of the future. Something tells me plans will soon be underfoot for Marvel to do something similar, given that the top-selling book of this “soft re-boot” — Mark Waid and Mike Del Mundo’s The Avengers — didn’t even clear 100,000 in sales for its first issue. The writing, friends, is already on the wall.

And that’s too bad, because it’s the “marginal” titles that are the first to go when the orders to clear decks are handed down. For all the shit DC You got from fans, books like Prez and The Omega Men were actually really fucking good, but there’s no room for “outreach” series in Rebirth. It’s all tried, true, and depressingly conservative. If Marvel had stuck with a handful of “offbeat” or “non-traditional” books like The Unbeatable Squirrel Girl and Moon Girl And Devil Dinosaur, those titles could have co-existed peacefully alongside their major players on the shelves for years. But by trying to skew their entire line toward the “emerging reader,” the “established reader” is fleeing in droves, and in order to win ’em all back in 10 or 12 months, it’s the Squirrel Girls and Moon Girls of the world that are gonna bite the bullet to make room for double-shipped Thors and Spideys. 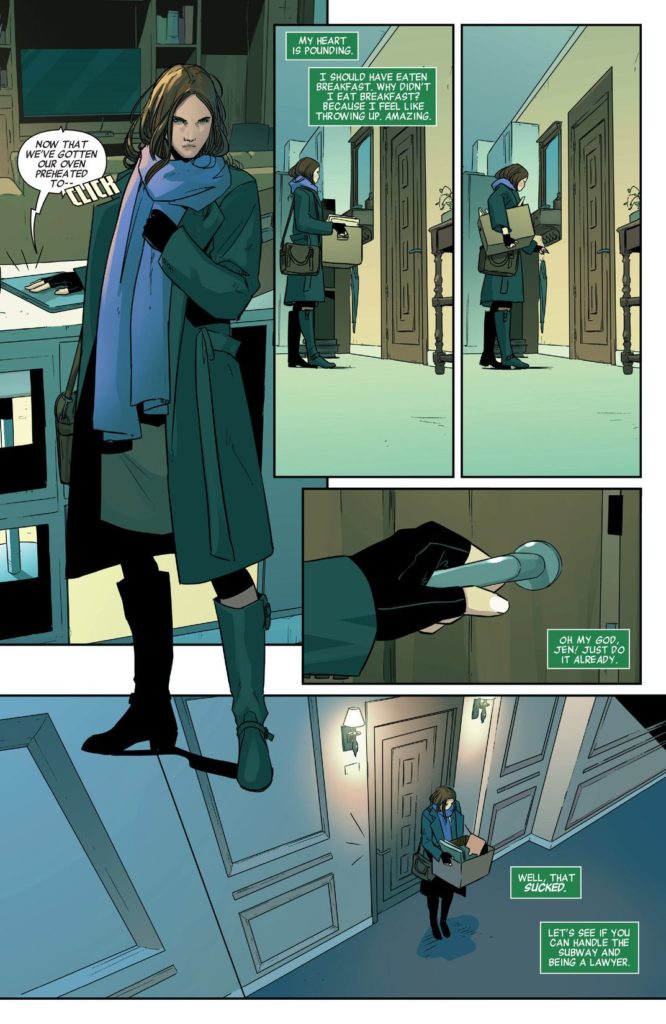 So, yeah, Jennifer Walters isn’t gonna be the less-than-incredible Hulk for very long — and given how lackluster this comic is, that’s probably no bad thing. But in the larger scheme of things, getting our “old” Hulk back a year or so from now isn’t all that exciting a prospect, either. Not because I have anything against Bruce Banner per se, but because when Marvel’s tanking sales dictate that they hit the “reset” button yet again, it’s going to mean that a lot of books that are a lot better than this new Hulk are going to get a date with the axe that they don’t deserve. Squirrel Girl herself is nowhere to be found in the pages of Hulk #1, but her presence looms large over it nevertheless, because as I read this and other Marvel Now! titles, all I can do is shake my head and think about how much I’m gonna miss her when her series is canned along with the rest of the books in this doomed-from-jump relaunch. Good-bye, unconventional Marvel titles — it was nice knowing you while you lasted.