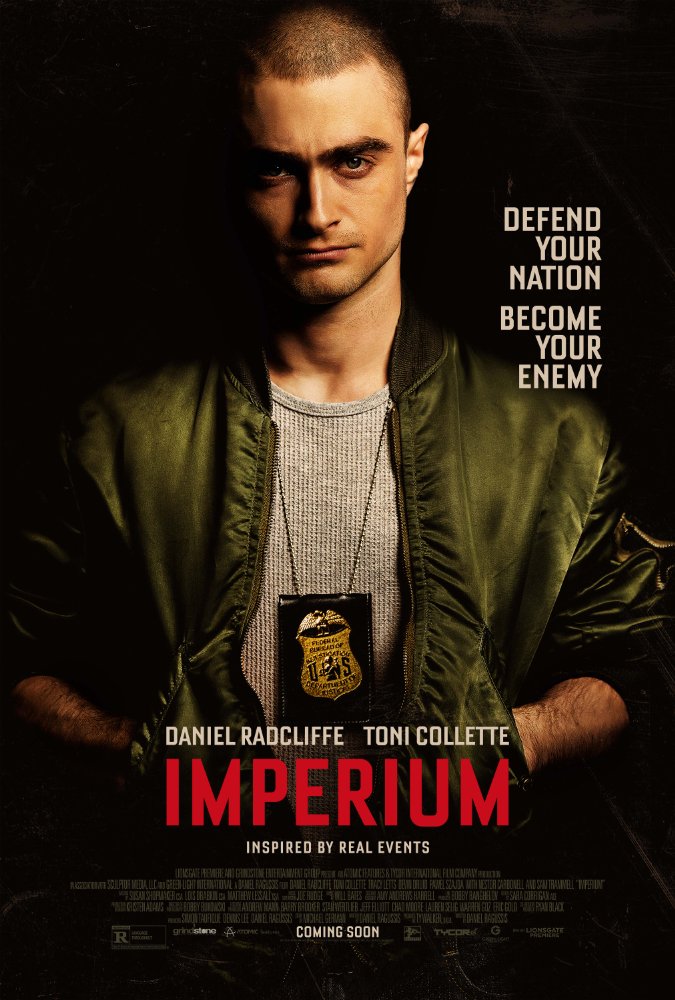 Since I was sixteen years old, l’ve I’ve been a part of the punk rock subculture, and in the past 22 years, not much has changed. One of the first things you learn, though, is to not trust the media. During the punxploitation boom of the 1980s, everyone was led to believe that every punk rocker wanted to break into your house, rape your daughter, and murder your family, all while high on PCP. As time went on, society realized that just wasn’t the case. Punk rockers are just nerdy kids with funny-looking hair who like aggressive music.

As true as this is, nobody seems to have gotten over the small sub-genre of skinsploitation films, a.k.a skinhead movies. If you actually know anything about the skinhead subculture, you know that traditional skinheads aren’t racist, and in fact real skinheads denounce Nazis and fight racism. The original skinheads took their fashion and music from black culture in the 1960s. The only skinhead movie that has come close to the proper portrayal of the skinhead subculture is director Shane Meadows’ THIS IS ENGLAND. Funny as this is, most punk rockers and skinheads will still watch any movie portraying their subculture, whether it is a positive or negative.  IMPERIUM  is more of the same kind of skinhead Nazi exploitation. 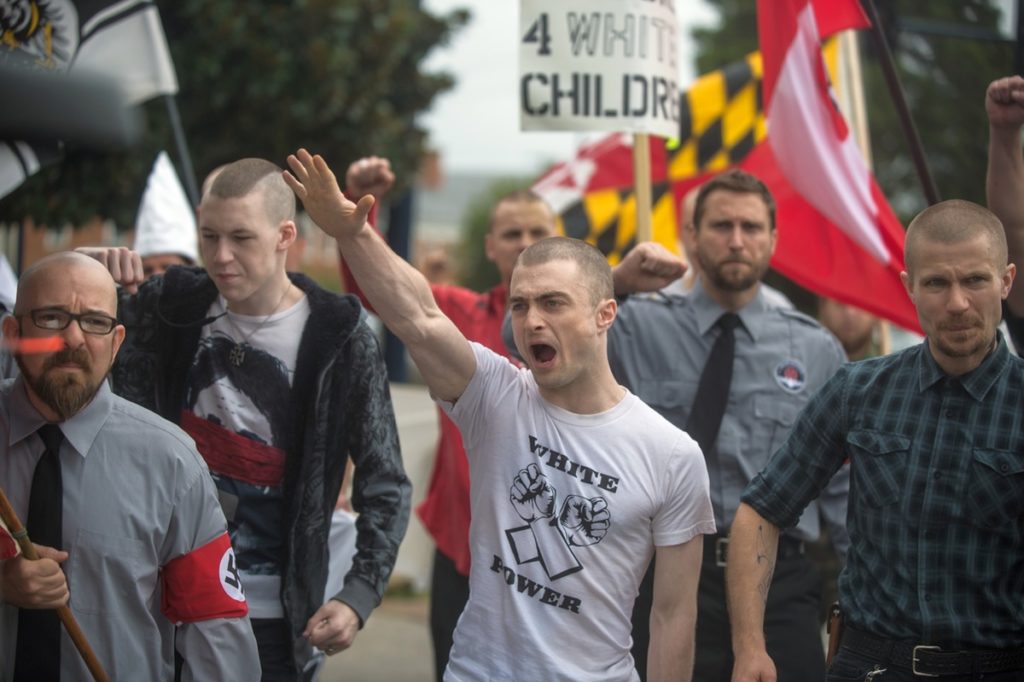 The tone of the movie is set pretty quick, with a quote by Adolf Hitler scrawled across the screen. It gave me chills, and got me ready for what I was in for. In walks eager FBI agent Nate Foster (Daniel Radcliffe) trying to prove himself. As much as I enjoyed SWISS ARMY MAN, it’s hard for me to take Radcliffe seriously. To me he’ll always be Harry Potter. Although, his character does remind me of myself at points. He’s always trying to give people the benefit of the doubt, and seeing things from their point of view, which I can completely identify with. Agent Foster’s superior, agent Angela Zamparo (Toni Collete) presents agent Foster with the opportunity to infiltrate and take down a domestic terrorist action by a “skinhead” neo-Nazi organization. As unbelievable as Radcliffe is, Collette steals every scene she is in. I believe her as a tough-as-nails FBI agent, trying to make it in the boys club. She is real as fuck, and I love her. 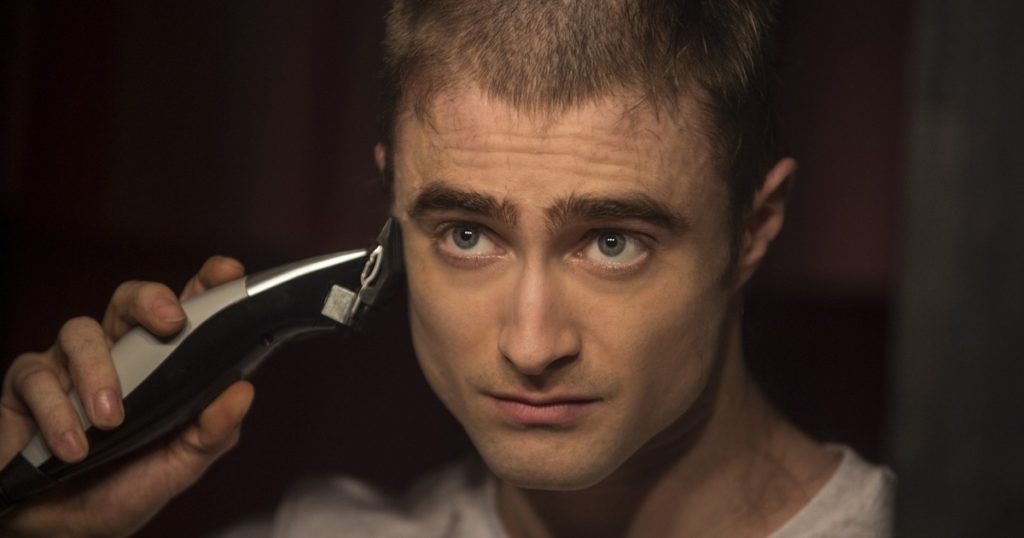 IMPERIUM is one of the few films dealing with the issue of domestic terrorism from a realistic point of view. Seeing Daniel Radcliffe rise through the ranks and from bonehead to neo-Nazi street trooper is actually kind of impressive. I would have to say this is one of his most striking performances. 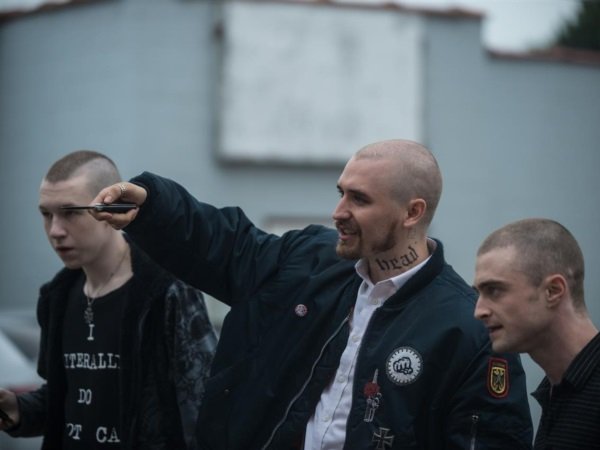 Not that I’ve ever spent much time with boneheads, but much of the dialogue came off as unnatural. Some of it is even laughable. The stock-film footage used in places is at best comparable to old Roger Corman movies. IMPERIUM may be based on a true story, but it’s still an exploitation movie at heart. I mean, how many great exploitation movies are ”based on true events.” That statement is one of the oldest gimmicks used in film.
While making his way up the social ladder of neo-Nazi underground, agent Foster meets with Gerry Conway (Sam Trammell). Gerry is basically the head of this shit storm, and he’s perfectly normal. Trammell plays the role of Gerry Conway masterfully. He is a non-threatening suburban dad type. No one would suspect that he plans to blow shit up and start a race war. Gerry Conway is the most believable white power character in IMPERIUM.
Seeing nationalists and anarchists clashing at the white power rally in IMPERIUM, is a prime example of how we ended up with Trump as president-elect. Extremist behavior is becoming the norm. The stabbing of one of the Nazi pricks is a great mirroring of recent events. The Nazi gang even has its own racially-motivated web series hosted by Dallas Wolf (Tracy Letts). I had to laugh out loud that Dallas Wolf is a middle-aged man, but his “studio” is in his mother’s basement.

IMPERIUM wants to be NIGHTCRAWLER, but ends up more like the 1989 film SKINHEADS. Everything seems to fall into place by the third act of the film. It all gets very predictable. IMPERIUM becomes more than a bit corny, but in the best possible way. The montages are akin with those from A CLOCKWORK ORANGE. The whole thing really wants to be smarter than it is. 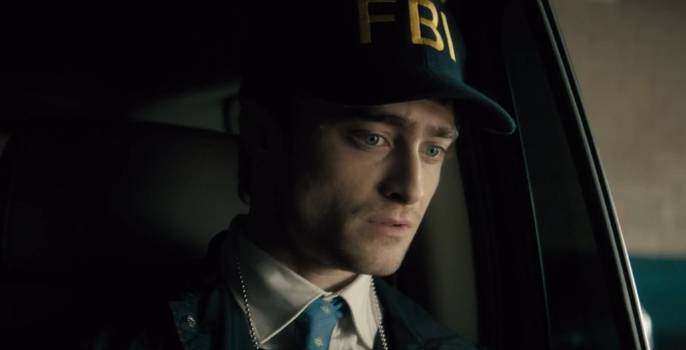