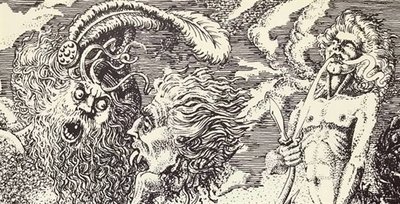 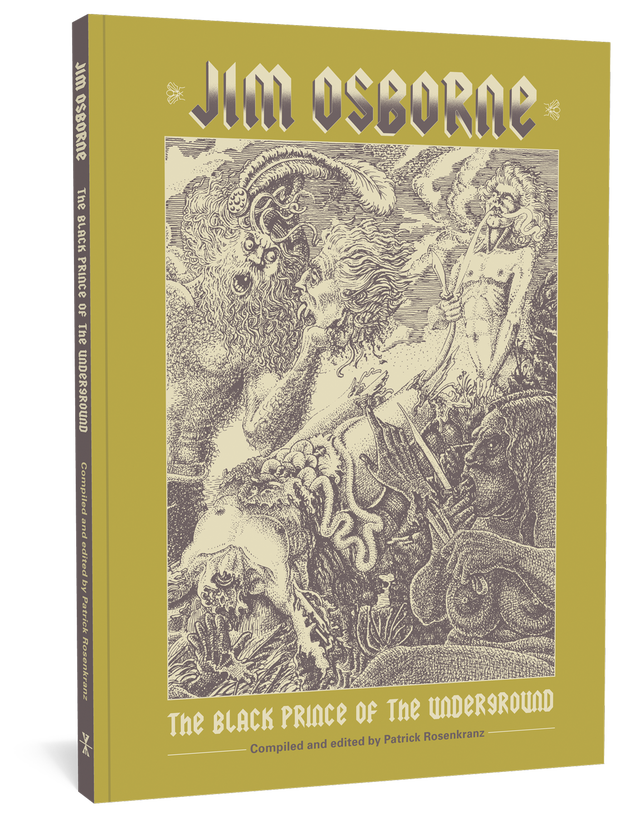 If you’re going to San Francisco —

Fuck the “flowers in your hair” stuff and forget the “gentle people” — you’d do better to keep an eye out for the speed freaks, junkies, pickpockets, gutter-dwelling lowlifes, psychotic serial killers, devil-worshipers, and predators of every stripe. The Mamas And The Papas may not know about these folks, but former underground enfant terrible Jim Osborne was very familiar with them, given that he drew them. He wrote about them. He got right inside their heads. And, as the years progressed, he became one of them.

Okay, sure, Osborne didn’t kill anyone (other than, over time, himself), but he was arguably the most complex figure to emerge from the underground comix scene, an incomparable illustrator with talent to spare and a meticulous eye for detail, his work never less than desperately, harrowingly, soul-deep ugly — so much so that even people who cut their teeth on the likes of S. Clay Wilson are often shocked and disturbed by our guy Jim’s hopelessly depraved visions of a fallen world. Wilson, you see, almost always gave readers a safe “out” by being so outlandish, so beyond the pale, that the utter absurdity of even his most extreme strips rendered them “unrealistic” by default. Osborne, by contrast (in a manner not unlike the closest thing he probably has to a “spiritual successor,” Joe Coleman) offered up fever-dream scenarios that were all too plausible, at the least, often just plain all too real. You could see this shit happening if the thin veneer of civilization ever slipped, on either a collective or an individual level. “Visceral” was the starting point for Osborne’s comix, and where they went from there — well, let’s just say that if the abyss gazes back, Osborne not only meets its icy and dispassionate glare, he stares it down and says, “Is that all you’ve got?” 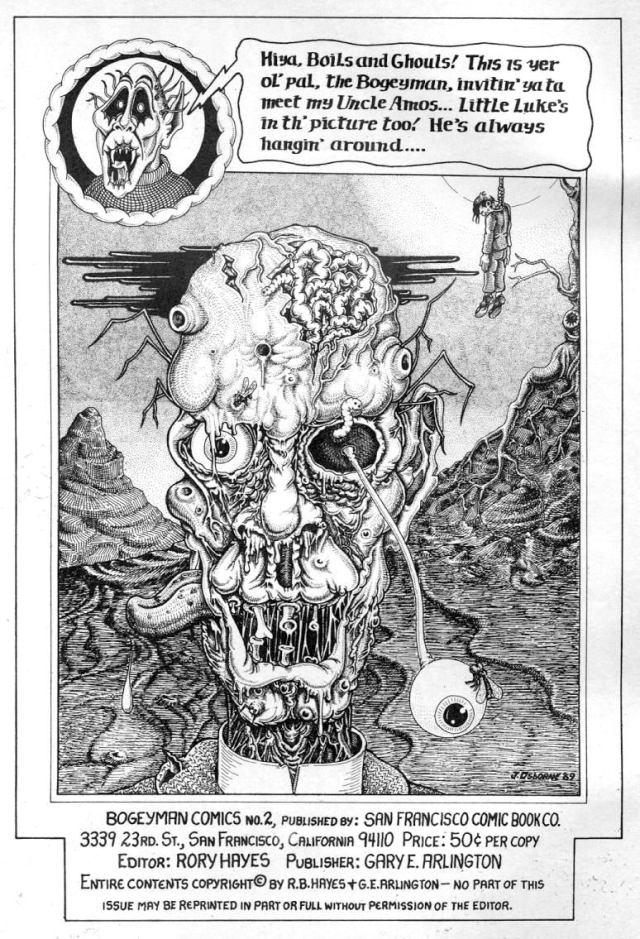 But let’s talk about where we are right now : it’s probably well past time for a reasonably comprehensive collection of Osborne’s work, but editor/compiler Patrick Rosenkranz (who has my eternal thanks for not referring to himself as a “curator”), the pre-eminent historian/scholar of the underground in this day and age, has gone well above and beyond with his just-released Jim Osborne: The Black Prince Of The Underground, published under the auspices of Gary Groth’s “street cred” Fantagraphics Underground label and loaded with 120-plus pages of Osborne’s most eyeball-assaulting stuff, which is to say — bad dreams, here we come. There is no “unseeing” what’s in these pages.

To that end, small doses might be the preferred method for the average reader when confronted with something this mentally and spiritually toxic, but me? I devoured the book’s entire contents in one sleep-deprived evening, my jaw literally agape as I took in these ecstatic (in the truest sense of the word) hell-scapes originally created for publications ranging from the notorious Yellow Dog and Bijou Funnies all the way “up” to National Lampoon. I felt like I needed a brain-scaldingly hot shower afterwards, it’s true, but it’s testament to how immersive a collection this chronologically-presented assemblage of nightmarish id-explosions is that not only did I not want to put it down, I didn’t want it to be over. I know, I know — I need some serious help. 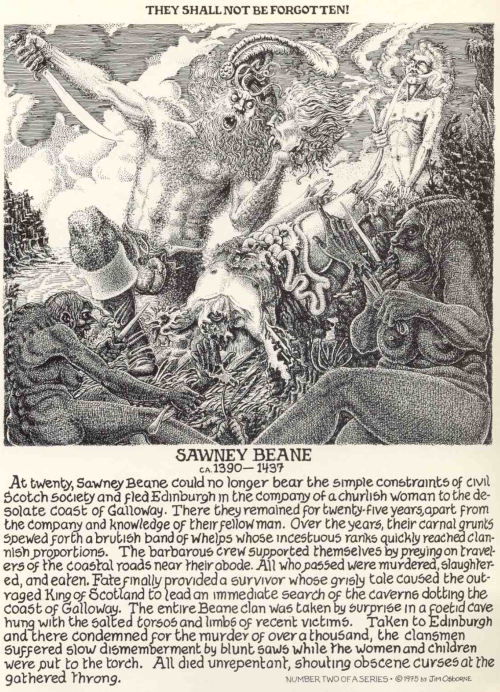 Roll call: murder! Sacrilege! Debauchery! Demonology! Conspiracy! Like a modern-day William Blake by way of the aforementioned Messrs. Wilson and Coleman, with a dash of Mack White at the margins, Osborne didn’t so much draw as he used his pencils, pens, and brushes as implements of exorcism, emptying the darkest corners of both conscious and subconscious mind onto the page with an exacting eye, a furiously-moving hand, and an utter lack of fucks to give. He’s not opposed to seeing the “funny side” when it presents itself, but more often than not the humor is as black and twisted as everything else on the metaphorical menu, and cuts just as deeply. This is art fully weaponized, with a goal of leaving no surviving comfortable delusions.

Providing absolutely invaluable context to these black-as-the-worst-night-of-your-life proceedings is Dennis Dread’s introductory essay/retrospective focusing on the totality of Osborne’s life and work, charting his trajectory from raw-but-talented Texas wannabe-illustrator to something approaching underground “superstar” in San Francisco to his long descent into the role of creatively dead alcoholic and drug addict wasting away on the streets (and in the bars) of the notorious “Tenderloin” district, finally ending as a tragic early victim of his own excess — along the way somehow finding time to embark upon a doomed marriage, out-live a younger brother he loved dearly, date an influential early-days female punk singer, even befriend notorious iconoclast/heretic Anton LaVey and rise to the level of “High Priest” in his Church of Satan. What a long, strange trip it’s been? You’d better believe it. 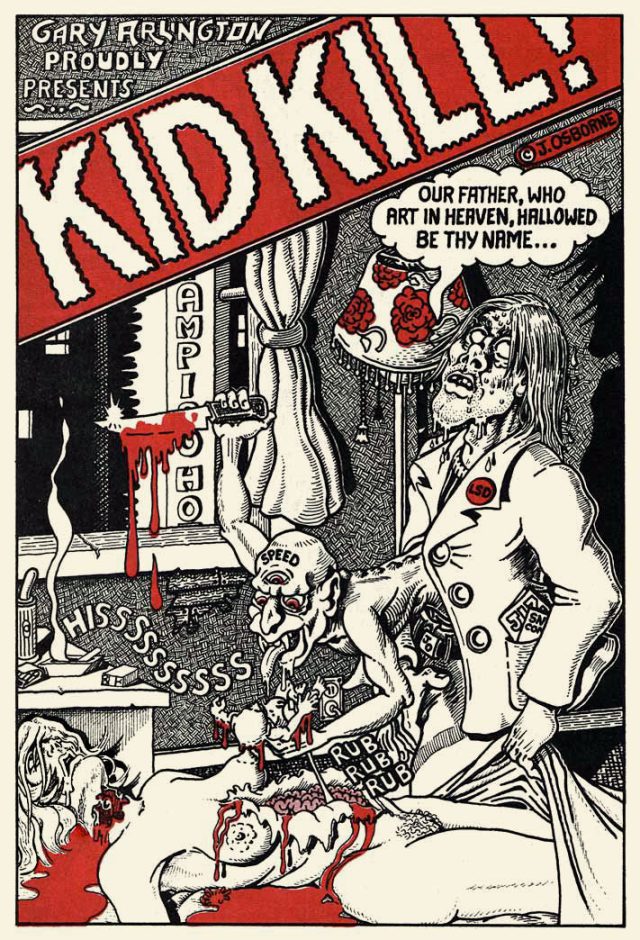 Even just a few short years ago, the idea that the man who created such memorable works that you wish you could forget such as Body And Soul and Men’s Lounge, The Tampico Hotel – 3 A.M. would have a lavishly-produced compendium such as this one dedicated to preserving his legacy of artistic nihilism would have been unthinkable, even if he was one of the foremost cartoonists of his generation in terms of sheer, unbridled talent (perhaps rivaled in the underground only by Guy Colwell, who likewise exhibited a breathtaking stylistic range), but the dogged determination of the indefatigable Rosenkranz, combined with the small-print-run economic model of FU (we get it, Gary, I promise you!) have made possible what once was anything but — and unlike other books carrying the imprimatur of this particular “micropress,” this one even offers nice value for money, boasting an entirely-reasonable $24.99 cover price. Certainly Jim Osborne: The Black Prince Of The Underground will only appeal to a very narrow readership, but for those who fit into that small sliver, it’s something beyond an “essential” purchase and very near to a revelatory one. One of the most important, and defiantly repulsive, historical releases of the year.