This week at Daily Grindhouse, we’re celebrating sexuality on film in all of its forms – from sophomoric T & A comedies, to sleazy mysteries and thrillers, to more sophisticated journeys into kink. In this modern day, there seems to be less sex going on in film—perhaps because it’s too easy to get amateur pornography online — and even in a post-FIFTY SHADES world, there is a societal notion that sex is “icky,” even by pundits on the left. As George Michael once sang: “Sex is natural, sex is good, not everybody does it, but everybody should.” 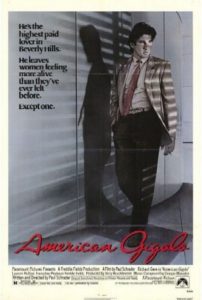 February 8th, 1980 ­— Valentine’s Day weekend — saw the release of Paul Schrader’s AMERICAN GIGOLO, which arguably ushered in a decade’s worth of sordid filmmaking, combining noir storytelling with R-rated sexuality. Boobs and butts were also a major selling point on plenty of comedies of the day, from PORKY’S to HARDBODIES to REVENGE OF THE NERDS. The VHS revolution and cable television helped bring these movies into the homes of countless adolescents whose parents never gave them the birds-and-the bees talk. It’s not sex education, it’s HBO.

This is SOFTCORE WEEK at Daily Grindhouse… welcome to it.