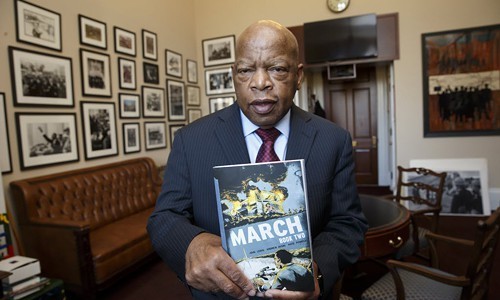 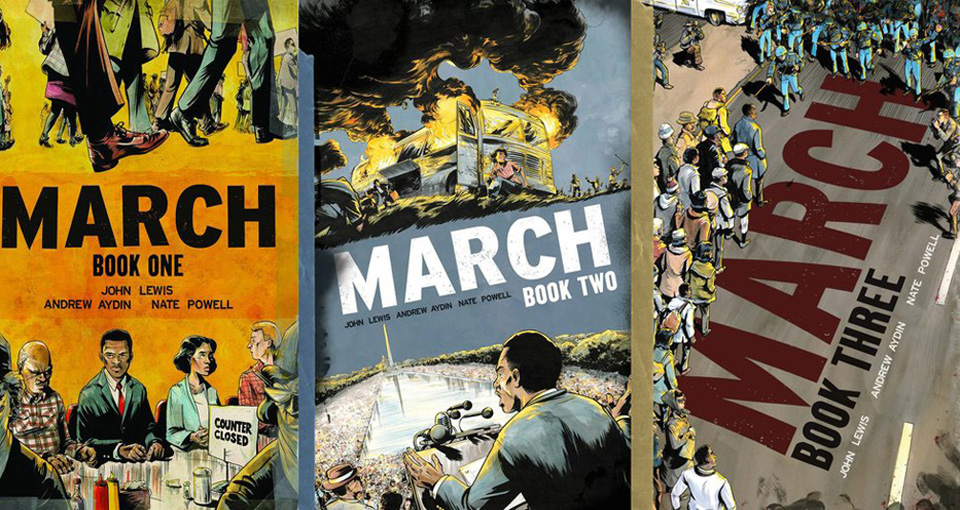 Okay, yeah, they might quibble with the colorful (but, I would submit, accurate) adjectives I just used in describing the various anatomical “attributes” of their chosen God Emperor, but still, come on — everybody knows this guy is liable to say something irrevocably stupid at any given time. And while he’s had nothing but praise for the likes of Putin, Assad, Dutarte, and other cheap, pathetic despots, the fact that he’s singled out Congressman John Lewis — a genuine icon of the Civil Rights era and inarguably one of the greatest living Americans — for criticism merely for saying what a good half or more of the country feels about this petulant, inarticulate, brain-dead man-child’s beyond-shady rise to power should give all people of conscience, regardless of their political affiliation, at least some pause. 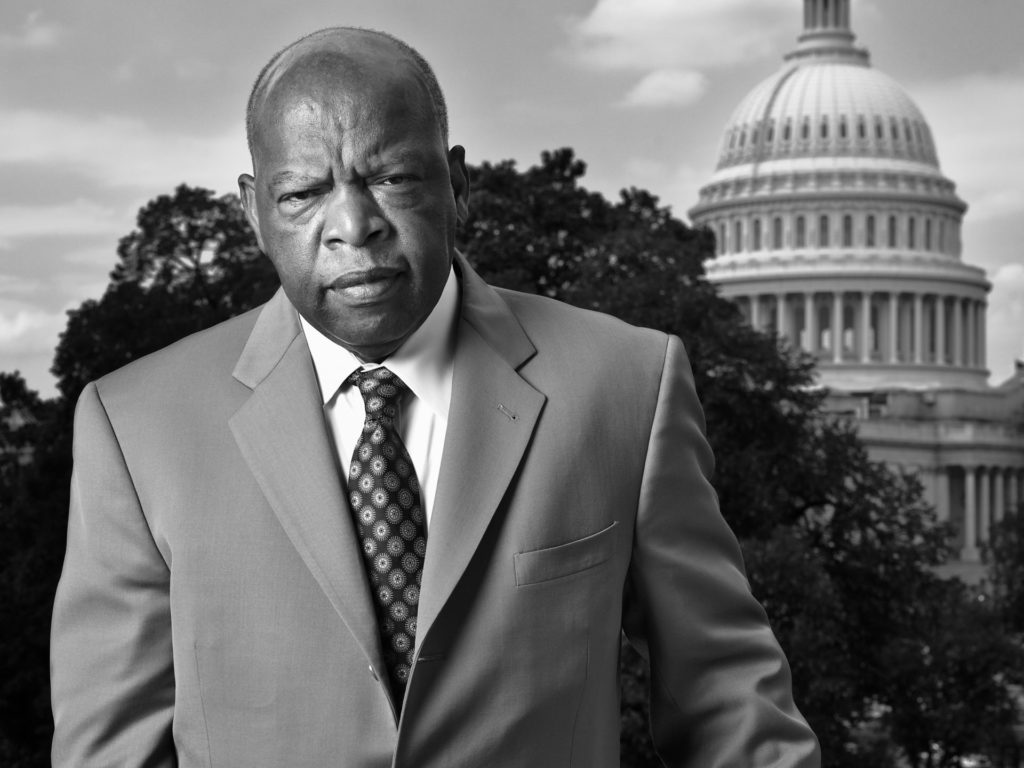 Hell, if anything, Lewis hedged his statements and didn’t go as far as many would. He didn’t, for instance, call Trump a Russian stooge, or a potential spy, even though he looks to be either one, the other, or both. He didn’t call him a racist, even though he clearly is. He didn’t call him a dangerously incompetent buffoon, even though he’s obviously that, as well. All he said was he didn’t consider Trump’s election “victory” to  be legitimate — and considering that the final certified national vote total showed the guy getting over 2.8 million votes less than his opponent, is that such a far-fetched claim?

It was too much for Mr. Big, Orange, and Stupid to handle, though, and so he went on yet another of his juvenile Twitter tirades, saying that Lewis was “all talk and no action,” that his Georgia congressional district was a “disaster,” and that instead of criticizing him, Lewis should “help” him with his still-mythical “urban renewal” projects that will no doubt line the pockets of both himself and his real estate-developer buddies. Imagine the nerve, if you will: While Lewis was being beaten half to death for marching for the equal rights our Constitution already supposedly guaranteed him, Trump was kicking black people out of his rental properties and getting the first tinkling — sorry, inkling — that he got off on watching girls pee, yet he’s got the nerve to say that Lewis is “all talk, no action.” Fuck that— and while we’re at it, Trump, fuck you, too.

And ya know what? That’s not “all talk” on my part, because I think it’s high time that people took some action, too. Fortunately for us all, there’s a simple and stress-free way for people to register their disgust with Trump’s attacks on a towering and heroic figure of American history — all you’ve gotta do is head down to your nearest book or comic store and buy March, the superb three-volume autobiographical graphic novel series from Top Shelf Productions/IDW Publishing chronicling Lewis’ life and struggles that he produced in collaboration with co-writer Andrew Aydin  and artist Nate Powell. These books are available individually in both hardback and softcover, or in a handsome slipcase set that collects all three. An over-sized deluxe hardcover of volume one was released last year, and similar editions of volumes two and three will be out later in 2017, but whatever format you choose know this: You’re in for a read that will move you in a very fundamental, perhaps even life-altering, way. And if we can get this thing to number one on the New York Times graphic novel list or the Diamond sales charts? Well, that might just send Trump a message. Not that I expect him to listen. 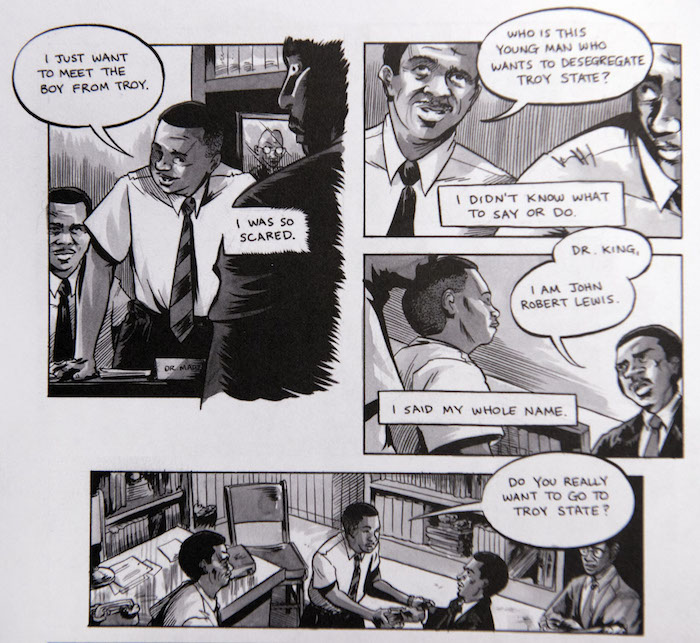 To say that this is one of the most ambitious and ground-breaking endeavors in the history of the graphic story medium is probably to sell it too short, even if it’s true — it’s also a National Book Award winner, a previous #1 best-seller on both the NYT and WaPo lists, a staple in many high school and college classrooms, and a Coretta Scott King Honor Book. Among other things. It’s also a living historical document. Volume one chronicles Lewis’ formative years in rural Alabama, his crucial early-life meeting with Dr. Martin Luther King, Jr., the birth of the Nashville Student Movement, the rise of the non-violent lunch-counter sit-ins that would become a staple of the era, and culminates in a stunning climax on the steps of Nashville City Hall that will leave you breathless. Volume two sees Lewis and his fellow Freedom Riders venture into the deep south and raises the stakes as the “powers that be” committed to enforcing Jim Crow resort to violence, arson, imprisonment, and even murder to keep systemic racism the law of the land in the buckle of the so-called “Bible Belt.”Allies from Dr. King to then-attorney general Robert F. Kennedy emerge, as well, but will they be enough to help Lewis as he rises, at age 23, to head of the Student Nonviolent Coordinating Committee and finds himself one of the “Big Six” leaders of the movement itself as they plan the 1963 March on Washington for Jobs and Freedom? As volume three chronicles, however, other events such as the Freedom Vote and Mississippi Freedom Summer helped to pave the way for the titular “March” that would change the world forever — and fundamentally alter the trajectory of both American society and Lewis’ own life. You may have heard about this one. It happened in a town called Selma.

Rest assured, March is no hagiography or wistful reminiscence of days gone by: divisions within the movement often come to the fore, points of disagreement are laid out in a “warts and all” manner, and not all the people and personalities involved come up smelling like roses. Talk about an invaluable “insider’s look” that almost no one else who is still alive can provide — and as you see how truly hard-fought all the gains Lewis and his compatriots and colleagues made were, you’ll walk away with an even deeper understanding of why any and all attempts to roll them back must be met with the utmost resistance. We owe Lewis and everyone who marched alongside him no less. The rights that people died for are literally under assault in the new Trump era, with racist attorney-general-to-be Jeff Sessions leading the roll-back efforts — is it any wonder, then, that Lewis would consider this pathetic, morally and intellectually bankrupt, fundamentally flawed and compromised president-elect to be less than “legitimate”? Is there one “legitimate” reason he should be expected to attend the disgusting spectacle of his inauguration? 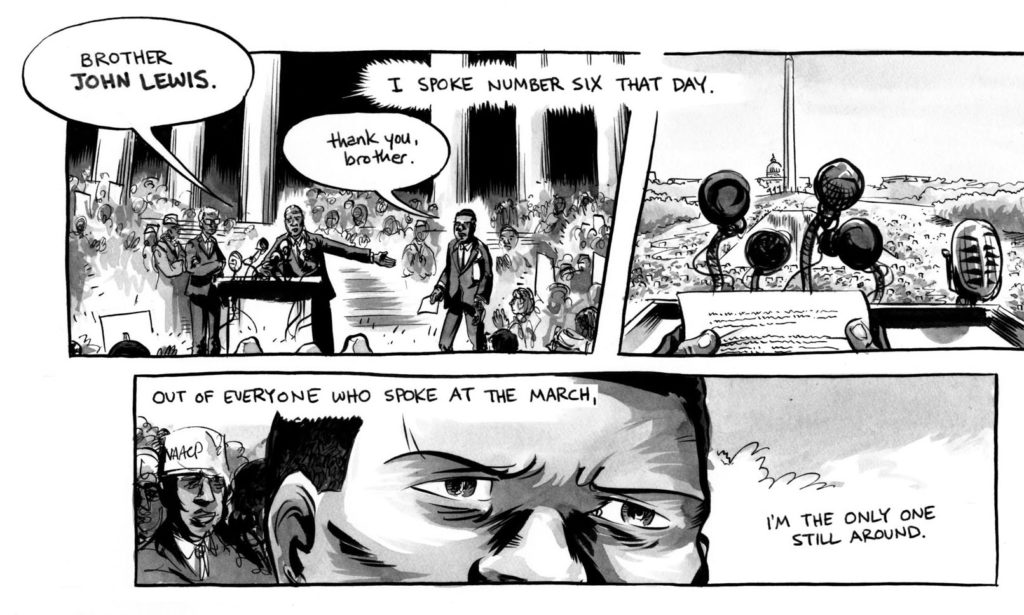 Powell’s expressive and deeply human art does a great job driving home the emotion in every panel of Lewis and Aydin’s magnificently authentic script, and the overall reading experience provided by March is by turns informative, moving, personal, enraging, and hopeful — often all on the same page. These books are the closest most of us will ever come to “being there,” and, as such, deserve to be celebrated as the triumph of autobiographical narrative that they are. Comics, as a medium, is lucky that one of the most important living historical figures chose this form to tell his life’s story, and now — more than ever — comics readers should show our thanks and support by picking these up. If you have ’em already, buy extra copies and give ’em to a friend. Buy ’em digitally so you can read ’em on the go. Do whatever — just stand with John Lewis while he’s still with us and while you still can. It’s never been easier to do the right thing, so — do it! 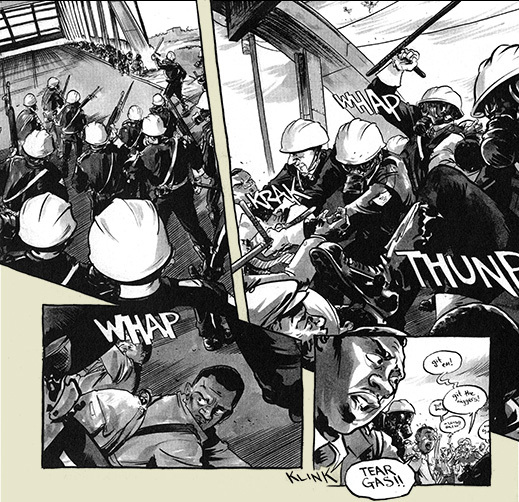 Congressman Lewis deserves so much better from his later years than to see our first African-American president — a man who awarded him the Medal of Freedom, no less — replaced with the most openly racist son-of-a-bitch to hold the office in decades, if not a century. But you know what? He’s been through worse, and come out a stronger and more indomitable man for it, and I have a feeling the same will be true here. When the epic and transformational life of John Lewis comes to an end, flags will fly at half-mast and solemn, sincere, and heartfelt memorials will flood in from across the globe.  By contrast, when Trump finally does us all a favor and shuffles off this mortal coil, I’ll personally start a gofundme to hire a couple of Russian hookers to go and piss on his grave.