Home  ⁄  The Wire  ⁄  [GRINDHOUSE COMICS COLUMN] ONE MINUTE TO WONDERLAND

Single-panel comics are a tough game to make a go of it in — especially if you’re going for something more, or at least other, than a quick laugh — but in his second self-published collection of them, the just-released One Minute To Wonderland, Denver-based cartoonist Karl Christian Krumpholz builds on the strong foundation he established in his previous go-’round, The City Was Never Going To Let Go, and manages to do something quietly extraordinary: Breathe real depth, character, and dimension into people and situations we meet for only the briefest of moments. 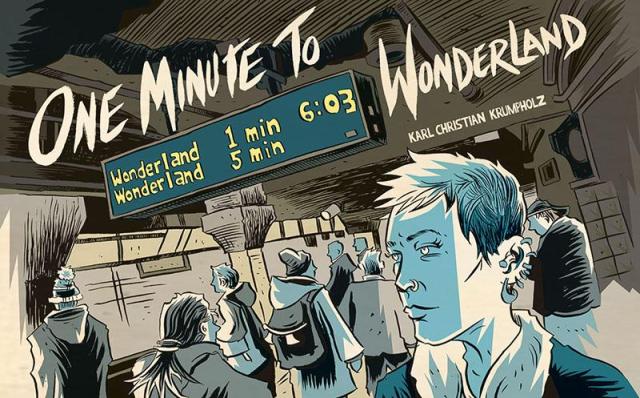 Not that you wouldn’t be well-advised to spend at least a bit of time lingering over his expressive, intuitively-intricate illustrations, mind you: Already well-established as arguably the definitive delineator of the modern socio-economic urban landscape in sequential form, Krumpholz is fast learning to translate those skills into “one-off” drawings — all of which are admittedly of a piece, but each of which expresses a truly distinct interpretation of city life on or near the broadly-defined “margins.” You want the real deal? This book is it. 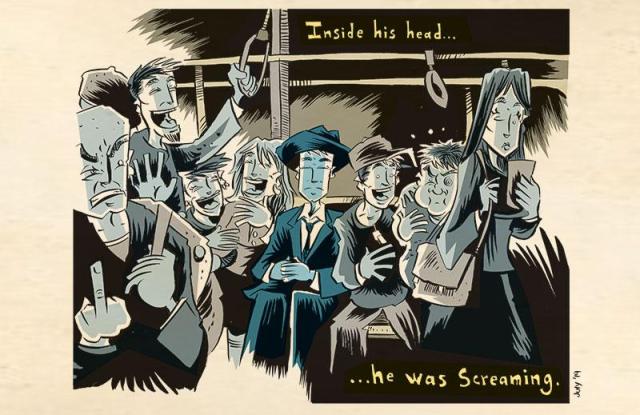 As an overall aesthetic experience, it’s pretty hard to argue with what Krumpholz has cooked up here: Presented in a unique 8.5″ x 5.5″ format on slick yellowed paper between heavy cardstock covers, this comic’s horizontal orientation offers the drawings contained within it plenty of room to spread out, giving a wonderfully contrasting “macro” feel to the “micro” interior worlds they frequently communicate, the end result being a collection that captures both the feel and look of densely-populated urban living and the uneasy place of the individuals attempting to make a go of holding onto a sense of self in the face of sometimes-overwhelming odds. Some opt to stand out, others to blend in, but each person has a story to tell, and those stories are often at the their most raw, powerful, and immediate when communicated via this sort of verbal and visual shorthand. 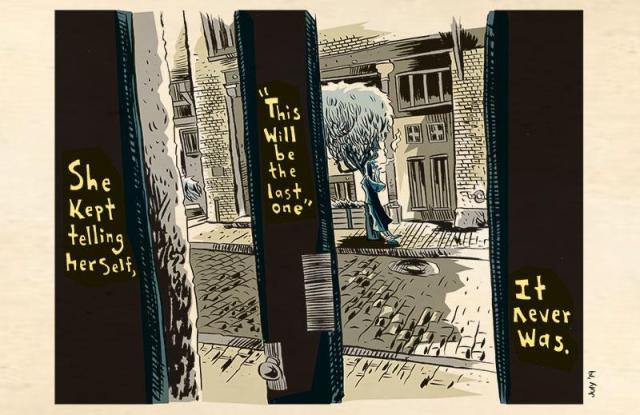 Krumpholz has been playing with various shades of blue as his accentuating color of choice for some time, and that experience really shows here, its placement being uniformly well-considered and drawing the eye toward important information that isn’t necessarily and/or immediately obvious — color choices are an interesting thing to consider even in far less-skilled hands than this, it’s true, but herein they rise to the level of being a living, breathing character in and of themselves, and trust me when I say that only sounds pretentious “AF.” Again, there’s nothing preventing you from getting the general gist of things in this book by means of a breakneck initial pass-through — indeed, I might even recommend doing so in order to absorb its contents in an emotive “rush” — but go back to the start after you’ve hit the end and do it all over again, this time taking in every facet of every drawing. I guarantee you’ll be glad that you did. 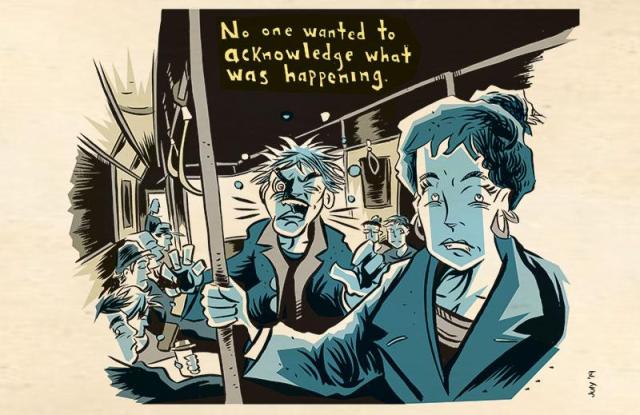 Commutes are a constant theme in Krumpholz’ comics, particularly those undertaken by means of mass transit, but so are those isolated moments when all is still, quiet, and a person is fixed to and/or in a certain spot. The one thing both motion and lack thereof have in common in these slices of life, though, is that the minds of the individual “protagonists” we’re presented with are far from quiet, whether they’re engaged in taking in their immediate surroundings or off on flights of fancy to places far away. Peace always feels hard-won, and momentary at best, but even when it arrives, Krumpholz’ characters seem to be girding for their next action, whatever it may be. Much, I suppose, as many of us probably do — so keep that in mind the next time your significant other says you have difficulty being “present,” I would suggest, and adjust accordingly.

Still, relationship advice is pretty far removed from what you visit this site for, and rightly so. That being said, the fact that Krumpholz’ comics offer still-life portrayals of so many things we can all relate to, reflect upon, and even learn from is testament to their power and efficacy — and whether you spend five minutes with his newest collection or five hours, either way it’s an experience you’re sure to remember.

One Minute To Wonderland is available for $10 from Birdcage Bottom Books.