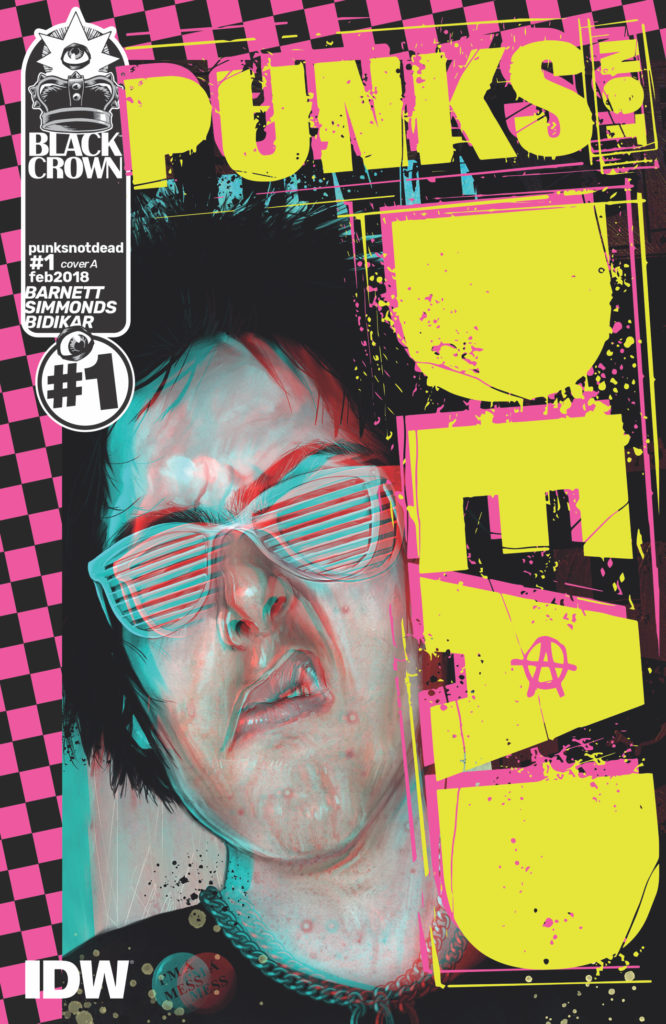 Here’s the thing — there are a million and one perfectly valid reasons for walking away from the first issue of writer David Barnett and artist Martin Simmonds’ Punks Not Dead, the latest offering from former Vertigo editor Shelly Bond’s new (-ish) Black Crown line at IDW, fairly unimpressed. For one thing, it seems to either not understand, or to deliberately eschew, punk’s radical politics in favor of glomming entirely onto its obnoxiousness. For another, it further cements the narrow aesthetic and editorial constraints that Bond has frankly shackled this entire label with since its debut a few months back. And for yet another, despite its present-day setting, its core premise is hopelessly dated and leaves the book wide open to charges of being the sort thing cooked up by people trying to be self-consciously “cool” — only their idea of what passes for “cool” is about 40 years past its expiration.

Okay, so that’s not exactly a “million and one” reasons — more like three — but let’s not get too far ahead of ourselves : after all, what matters most (or should matter most) about a comic is the quality of its story and art, right? We should be judging Barnett and Simmonds on the merits of their ideas, sure, but also on how well they’re able to communicate them. In short, it’s up to them to prove doubters like me wrong, is it not? 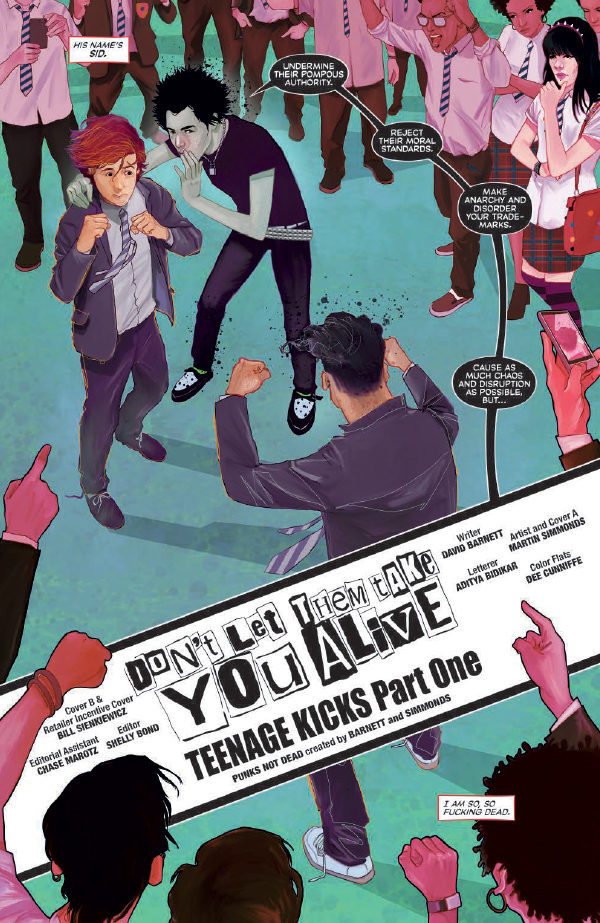 Meet Feargal “Fergie” Ferguson, a fairly typical 15-year-old nominal “outsider” with a decidedly atypical home life in that his single mother makes her living by shilling a million and — sorry, we’ve already been down that road, let’s settle on a dozen or so — bogus stories about her “problem” child to the tabloid press and TV talk-show circuit. One day he’s a hopeless junkie. The next he’s a gay porn addict. The day after that he’s a put-upon bullying victim. And when those all run their course, he might be a combination of any or all of them. Whatever sells, I guess — unless and until the gutter media realizes they’re being played for suckers, which apparently hasn’t happened yet.

One day, I suppose, it will, but until that day comes they travel a lot, and it’s during one of those travels — or, specifically, an airport layover between them — that “Fergie” makes the acquaintance of Sid, a very peculiar sort of ghost who “lives” in a Heathrow men’s room, and who no one else can see or hear. Don’t ask me how that works.

In fact, don’t ask me how any of the paranormal “rules” in this comic work at all — and don’t ask me who Sid even is (or should that be was?), either. In Barnett’s text piece introducing the issue, he makes it clear that he’s not meant to be Sid Vicious, despite the comic explicitly referencing his date and place of death — which line right up with the circumstances of Vicious’ demise. Is this comic just being coy, then? Perhaps playing it safe legally? Well, maybe — and maybe not. 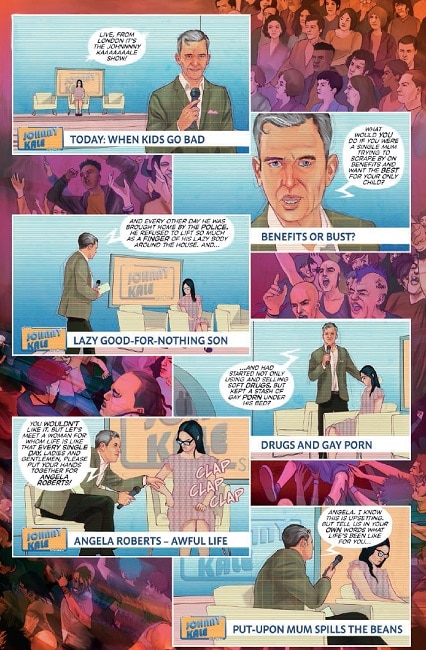 Certainly, as depicted by Simmonds, Sid looks more like the bastard love child of Gary Oldman’s take on Vicious from SID & NANCY and Neil Gaiman’s Dream of the Endless, so there’s some visual evidence to suggest that maybe he really is just some ephemeral manifestation of the “Spirit of ’77,” as Barnett claims/insists. And he’s a bit less vulgar and confrontational than most of us would probably expect Vicious to be, although he still has attitude to spare. So I guess the jury’s out here on whether or not the creators are being straight with us, or too clever by half — and that’s perhaps the comic’s greatest single virtue.

You get where I’m going with this line of specious “reasoning?” Punks Not Dead — as the absence of an assumed-to-be-there apostrophe from its title should clue us in on from the start — is a book that enjoys fucking with its readers. Subverting expectations is one thing — and there’s plenty of that on offer here — but to do so with a smirk (albeit one hidden beneath a sneer)? That takes something that the best punk rock always had: balls. And the fact that Barnett and Simmonds clearly have them to spare goes some way toward convincing me that their understanding of punk as a cultural phenomenon, as an ethos, as a way of life, goes well beyond the merely superficial. 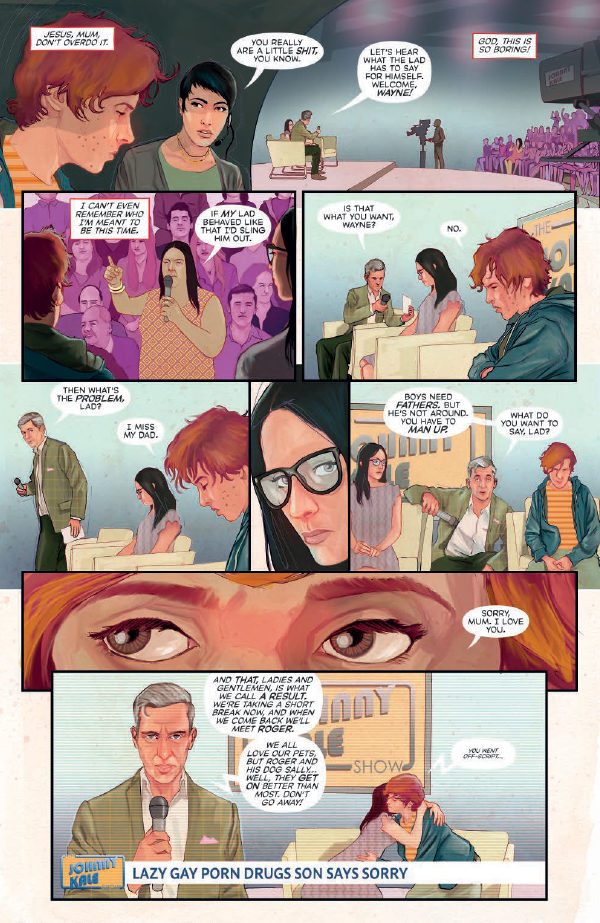 Even so, Simmonds’ crisp and precise art, while certainly hinting at a bit of Bill Sienkiewicz-style anarchic chaos at the margins (probably fitting, then, that Sienkiewicz himself does this issue’s variant cover), is far more controlled than you’d expect, particularly when overlaid with Dee Cunniffe’s ultra-clean color flats. But again, that’s not really meant as a “knock” — confounding expectation being, as already stated, an integral part of that whole “fucking with you” thing. Besides, it looks really welcoming and each character has an appearance equally distinctive and real. A comic that’s easy on the eyes may not scream “punk,” it’s true — but it will keep you engaged in the proceedings.

As will the just-referenced characters. “Fergie” comes off as a likable enough kid with a reasonable amount of depth to him; his mother’s a one-note cipher, sure, but at least an entertaining one; Sid’s utterly fascinating no matter who he’s supposed to be; and MI5 “ghost hunter” Dorothy Culpepper is the sort of been-there, done-that, and loved-every-minute-of-it wizened old crone that feels like someone cult British comics author John Smith (frankly my favorite funnybook scribe from the other side of the pond not named Moore) would come up with — I pretty much love her to death already.

So what the hell — count me in for this one. Punks Not Dead may not do much to dispel, or even assuage, my overall concerns about the extremely fenced-in remit that Bond seems to have foisted upon Black Crown immediately upon inception — one that inherently marks this so-called “curation operation” with the stench of an exercise in nostalgia — but if you’re willing to roll with the ground rules she’s set in place, this just might be as good as it gets. And you know what? That’s quite a bit better than I was figuring.