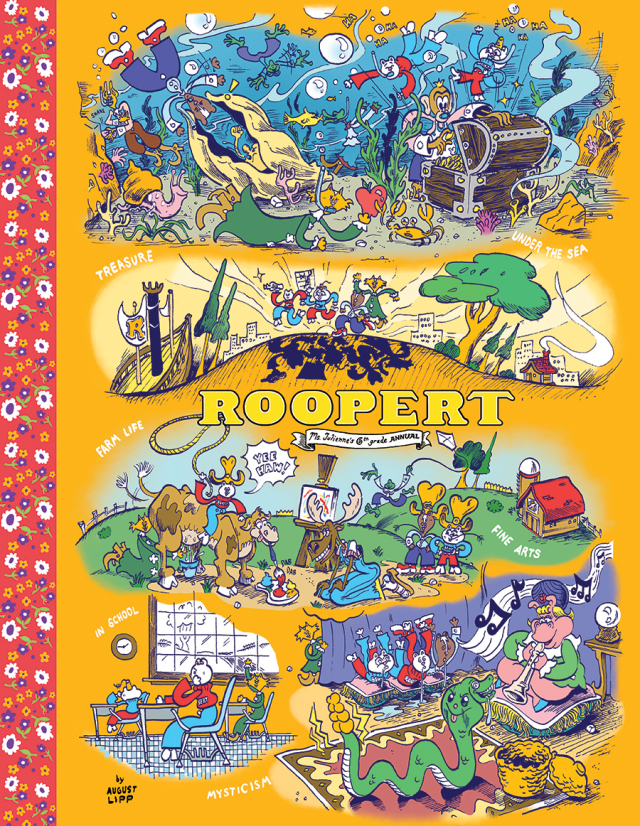 There’s no doubt about it: “funny animal” comics aren’t what they used to be.

Then again, they never really were, at least not the good ones — one way or another, they were always at least a little bit subversive, and whether we’re talking about Walt Kelly’s open socio-political commentary in Pogo or Carl Barks’ knowing winks to the audience showing that he understood, accepted, and derived something very much like joy from working around, the limitations of form and function supposedly imposed upon his limitless imagination in his various “Duck Books,” our anthropomorphic stand-ins have always been one of the very finest means by which skilled and inventive artists communicate largely-unspoken truths about ourselves to ourselves.

In that sense, then, Philadelphia-based cartoonist August Lipp‘s late-2017 Revival House Press release Roopert carries on an already-proud tradition — but this 56-page oversized magazine (a real bargain at ten bucks, trust me), ingeniously presented as a mock line-ruled school composition book (on faux-yellow paper complete with “holes” along the side, no less), is no mere updating of tried-and-true tropes, nor is it yet another deconstruction-hidden-in-plain-sight. Rather, this is something wholly, entirely, at times even ecstatically new — main-lined right into our brains via a “delivery system” we’re all quite familiar with. 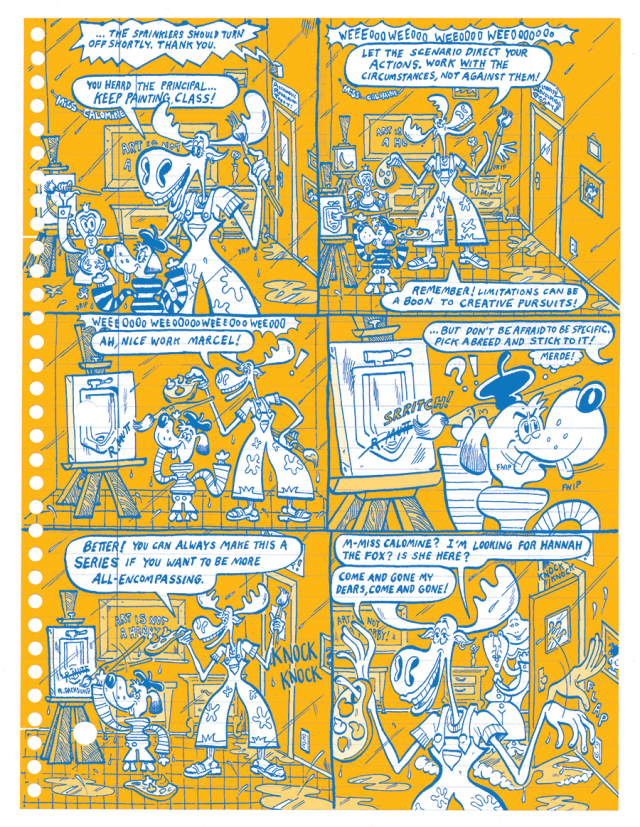 Subtitled “Miss Julienne’s 6th Grade Annual,” Lipp’s comic is deliberately and smartly “juvenile” in its execution, but the keen intelligence and wit behind it are evident from the moment we meet Roopert and Benji Bear (no relation, near as I can tell), Henrietta Hippo, Clyve Badger, Timothy Frog, Hannah Fox, Clarissa Crocodile, and the other students — as well as long-suffering faculty — of the most batshit-crazy elementary school you’ve ever seen. The guardrails are off from the outset here, and each subsequent plot contrivance that Lipp pulls out of the deep well-spring of his subconscious ups the disaster ante with unrestrained glee. The story starts with Miss Julienne telling the kids in her class about her summer trip to Honduras — and it ends with all of them (plus the principal and the art teacher) actually sailing there on a magically-grown ship extracted from the inside of a bottle. 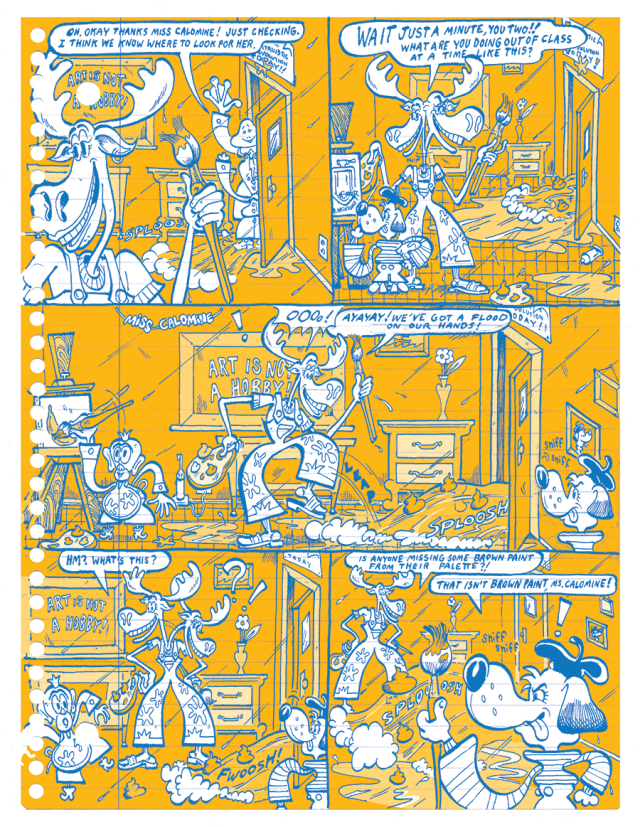 At this point, I’m sure, you’ve got a million questions about how in the hell Lipp’s motley ensemble gets from “Point A” to “Point B,” but I’m not giving away a thing: what makes this book so much fun is how every page delivers multiple unexpected twists and turns, the haphazard surface trappings of the narrative and the art throwing a thick, heavy disguise over what is, in actuality, a highly intricate plot structure and a packed-to-the-gills visual extravaganza that encompasses everything from lamely-believable acronym posters to, believe it or not, a hat-tip to Steve Ditko. You want clever? Roopert is so clever it hurts — but don’t blink, or you’ll miss some minor detail, some blissfully spot-on background element, that gives away just how clever it really is.

Even the problematic elements in this comic are deliberately so: the character of Anthony Monkey, for instance, could be read to re-inforce the ugly racial stereotypes of “funny”books gone by, but like Moore and O’Neill’s Golliwog from The League Of Extraordinary Gentlemen, the intention is clearly to “de-power” such imagery by pointing out its absolute absurdity right out in the open. The depiction of an overtly “human”-esque monkey flinging shit against walls won’t sit well with all readers, of course, and I most certainly respect those who will take exception to it — but this isn’t an echo of, say, the disturbingly casual racism of Will Eisner’s The Spirit, but rather an obvious acknowledgement and, crucially, refutation of it. 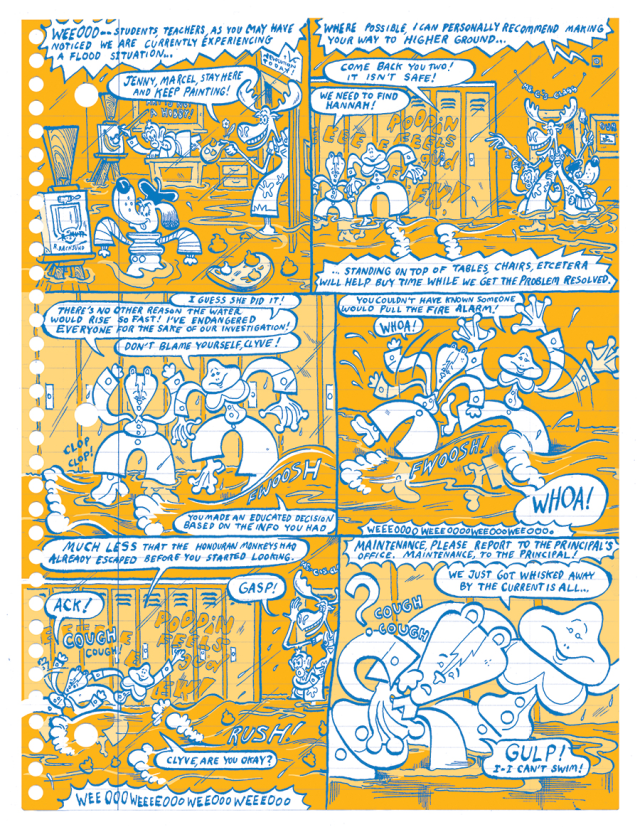 As for the one actual human in these pages, the aforementioned Miss Julienne, she’s the most hapless of all participants in the proceedings, but even then there’s no hint of tragedy in her “arc” : like everyone else, she’s called upon to go with the absurdist flow and somehow keep her head above water — literally, as it turns out. But by the time everyone’s survival skills are put to the test, the idea of a happy ending, whatever that may be, is already a given — Lipp gives Kurtzman, Crumb, or (hey, these guys again!) Moore and O’Neill a run for their money in terms of sheer denisty of material per panel, but it’s all in service of something inherently, dare I say it, happy. You just know that everything’s gonna work out great because, hey, the whole damn thing has been considerably more than great all along.

Roopert is one of the most wholly inventive comics it’s likely ever been my pleasure to read, no exaggeration, and it can be ordered directly from August Lipp (who will personalize your copy on request) at https://augustlipp.tictail.com/product/roopertpreorder