Remember those nights where you’d stay up during the witching hour to watch tawdry, terrifying films on the boob tube? You’d stuff your face with hot popcorn or cold pizza and down it with an even colder soda. You’d eagerly wait to see what sleazy wares Joe Bob Briggs would peddle outside of your parents’ eyesight. Or perhaps you were excited to see what fright flicks Gilbert Gottfried and Rhonda Shear would show on USA UP ALL NIGHT. Did you always travel into the dank recesses of the horror section at your local VHS store on Friday nights and dare yourself to pick a film to scare you over the weekend? If you were that bloodthirsty maniac who never forgot your first love – trashy horror film, then you’re in the right place.  Late Night Frights is a monthly column at Daily Grindhouse where Nathan Smith dives into the VHS archives to highlight horror films for all the lovely gore hounds that regard their mom and pop video stores with warm and fuzzy nostalgia. 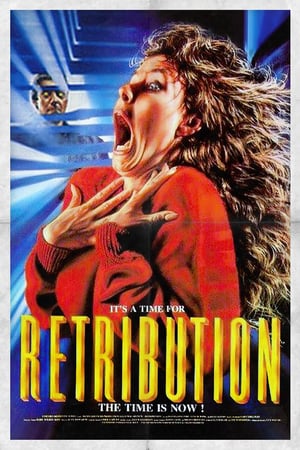 In James Mangold’s 2003 flooded fright feature, IDENTITY, ten people all find themselves stranded at a roach motel in the middle of nowhere, besieged by rain and a killer. There they stumble upon a shocking revelation – they were all born on the same day, May 10th. This as we know isn’t just as simple as fate or coincidence, but it sure as hell seems that way at the time. What are the odds that you’d meet ten people who share the same birthday, on the same night, stranded in the same place? In William Peter Blatty’s supreme horror film, THE EXORCIST III (would make a hell of a double feature with RETRIBUTION now that I think on it); a serial killer is executed on the same night as the ill-fated titular exorcism, his spirit being transferred into the comatose body of a priest who performed said exorcism. This is a cruel twist of fate, cosmic karma being doled out to an unfortunate man who attempted to take his life, to save someone else’s life. Coincidence can be shrugged off, but fate cannot be ignored. What of the idea that two men, both unknown to each other, but born on the same day (April Fool’s Day) both die on the same night – one being the victim of depression, the other being the victim of multiple hot lead injections, meet somewhere on their way to the afterlife – these two veritable ships in the night on the river mortality. If this preamble has seemed as bat-shit crazy as it reads, then you’re in the right frame of mind for a sun-soaked, Day-Glo smeared tale of carnage and revenge, Guy Magar’s 1987 film RETRIBUTION.

RETRIBUTION feels a little like a sleazier episode of the 1980s TWILIGHT ZONE. The boiled down basics of the feature is that on Halloween night, a depressed artist named George Miller (no, not that one) takes a concrete plunge off of his building, dying briefly before being revived and hospitalized. Throughout his rehabilitation and release, Miller is plagued with green-tinted nightmares of a man being executed gangland style by a group of people. Elsewhere on the same night as George’s attempt at taking his life, an unlucky chump named Vito Minelli crosses the mob and is gunned down, his last words being “Santa Maria, Mother of God, help me!” Throughout the film, Minelli uses George as a vessel, possessing him to seek revenge on the people that murdered him. The film doesn’t hold your hand throughout either while you’re sussing out what’s going on – meaning if you don’t read the plot synopsis, which I’ve just written … shit … you’ll have to wait until Magar is good and goddamn ready to parcel out the plot.

Magar, who in addition to directing the feature, co-wrote the script, co-edited the film and produced, wields excellent control over the proceedings. Though some of the day to day scenes of George’s life can come off a bit flat, when it comes to the supernatural/stalking/murder sequences, Magar unleashes his special effects budget giving us a gel-colored, electricity-veined mania that feels like the movie took a hit of black coffee straight to its heart. When we see George murdering Vito’s killers, his eyes all neon green, his voice churned with diabolical dressing, it’s some horrific shit. The finale, which plays as one long nightmare set-piece, is directed with ferocity, and by the time the film devolves into something out of A NIGHTMARE ON ELM STREET, we’ve reached peak horror nirvana. This leads us into the shocking and horrifying climax, which in turn resembles the waterlogged final shot of TENEBRAE (a beautiful woman screaming in the rain), even if the film feels more like an American production of a Lamberto Bava film rather than an Argento film.

One element I think the film pulls off excellently is how much respect George is treated with following his suicide attempt, therapy, and reintroduction to society. No one judges him for attempting to commit suicide, no one treats him differently once he’s back (no sense of feigned sympathy here) other than with genuine compassion, and in fact they throw a damn party for him. He’s surrounded by people who care about him, like his “girlfriend” Angel, played by Suzanne Snyder (NIGHT OF THE CREEPS, KILLER KLOWNS FROM OUTER SPACE). Whether it was the intent of the director or not, this shows that despite having folks around you who like you, people will take their own lives and that people will love you no matter what. There’s no real discussion of why he decided to commit suicide, briefly they touch upon this in his first therapy session – it revolves around his perceived failings as an artist, but the reasoning doesn’t matter.  It happened, and now we move forward to help him heal. They even ardently defend him when it’s becoming clearer and clearer that he’s involved with the string of gruesome murders permeating the city. Similarly, his relationship with his doctor comes off as warm and compassionate, despite crossing professional lines, she cares for his well-being even when questioning his sanity, but never acts without regard for his safety. I also liked the idea that Vito Minelli isn’t played off as a stock villain. He’s just a guy that got caught up in the wrong end of the business at the wrong time. He’s never mentioned to have done unscrupulous actions in his life, other than cheating on his wife. It’s only after death that his true viciousness plows forth. Truthfully, there aren’t really any major villains in the film, aside from the gangsters that executed Minelli in the first place, though oddly transportation professional like taxi drivers and bus drivers come off like assholes, as well as doctors.

Dennis Lipscomb (who resembles a 2018 Michael Showalter) as George is a sympathetic lead, though his acting can come off as spotty is places, usually when he’s asked to pull off some of the dramatic beats. There is something kind of neat about seeing a mid-forties man as the lead in a horror movie, particularly one who isn’t your Hollywood handsome type. This ultimately relegates George to the everyman status that so many films claim to want to achieve, but usually cast a good-looking fella in the role anyways. It amplifies his romantic relationship with Angel, a bonafide hooker with a heart of gold who genuinely, un-ironically loves him despite the fact that he’s older than her. Most films would cheesily sidestep a relationship like that where she doesn’t like him because he’s old or not as handsome, but it doesn’t. Their little moment dancing at his party is so goddamn sweet. The rest of the cast fairs just as fine, especially the authentic love between Snyder and Lipscomb and hell, you’ve even got Hoyt Axton turning in a reliably subdued performance, albeit a brief one (perhaps he was cranking out Three Dog Night songs) as a detective hot on George’s heels.

This in turn leads to the complaint that RETRIBUTION is overlong. Yes, at 109 minutes is mostly true, the film could’ve used some judicious editing in spots, and some plotlines could’ve been tightened and others expanded upon – though Minelli is a major part of the film, he’s never really a character. If we could spend less time with George, or perhaps balanced or even touched upon the duology of George carrying an unwanted passenger within him, the film might feel a little less bottom heavy. I believe some of the melodrama around George’s life could’ve been exorcised, like his visit to the Rastafarian club that ultimately goes nowhere. The film could use more scenes of retribution too. While the three murders we do get are fantastically done, with Magar dripping atmosphere in the frames, there’s just too little of it, especially considering it’s the reason for the film to exist. Yes, they’re admittedly nice and gory, with disembowelings, dismemberment head-crushing, and bodies getting sawed up, if there was a smidge more crimson poured into the celluloid, this film would’ve achieved notoriety amongst the blood-hungry VHS crowd. Alan Howarth’s score can be a bit overbearing at times, particularly in the scene in the cemetery where George discovers a key piece in solving the paranormal puzzle, but does it work to accentuate the spooky atmosphere appropriately, and at times creates a nightmarish wall of sound, particularly in the final frightening scene.

Sadly, Guy Magar’s been relegated to television for his career, but his other noteworthy contribution to the horror field is STEPFATHER III, which I also reviewed, making Daily Grindhouse the Magar-iest website out there. RETRIBUTION is available to buy, but the cost to acquire it is exorbitant, $36.99 for DVD alone and that’s a copy from 2012! You can go to Amazon Prime and watch it there – the version looks clean with some scratchiness in places. I can only hope that someone lights the torch for this film and we get a better updated copy of the film down the road.