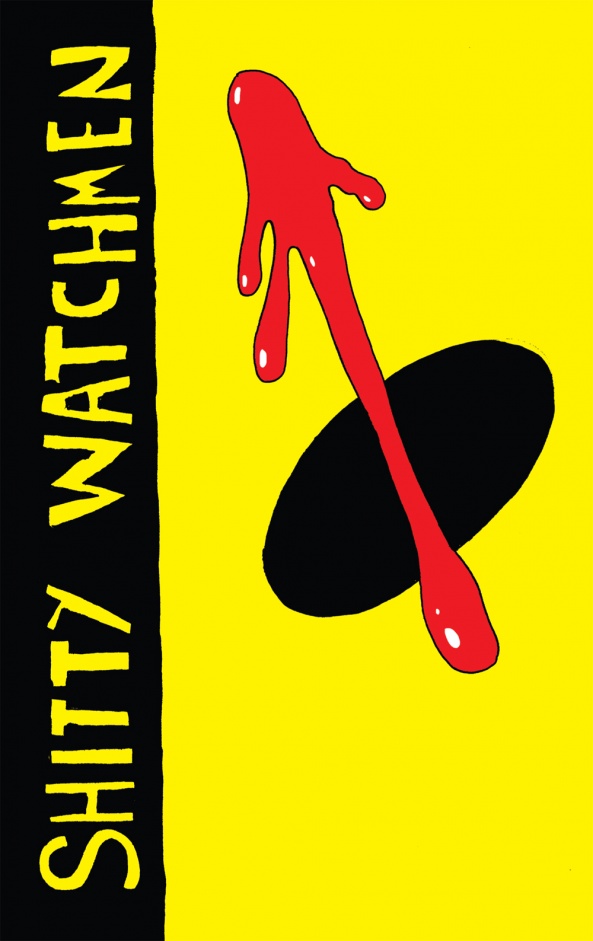 I have no idea how many words have been spent — digitally or in print — praising and/or occasionally lambasting, to say nothing of parsing the rich minutiae of,  Alan Moore and Dave Gibbons’ Watchmen, but it’s surely gotta run into the billions by now, and I confess to being one who has contributed to the ever-growing landfill of opinion on this most seminal of works, but please give me some credit — I at least never stooped so low as to regurgitate the depressingly common line that it represents “the last word on superheroes.”

Oh, sure, at one point during its gestation its creators may have harbored illusions that it could be viewed as such — and for a long time it stood as both of their final words on the genre/phenomenon — but eventually both of them (Moore in particular) decided that they each had more to say on the subject, much of it a direct response not so much to Watchmen itself, but to the industry-wide excesses that sprang up in its wake. By now it’s painfully obvious to all of us that DC editorial never really knew what to do next after it was done and, lacking the vision to understand that its runaway success meant that audiences were ready for more good comics, instead they chose the easier path of just giving us more dark comics. Those, after all, can be cranked out without much effort, or even thought.  And so here we all are, three decades later, still wondering why a work that its creators sincerely hoped would be eclipsed in terms of quality in fairly short order never has been.  And here we are still talking about it.

Not that it isn’t worth talking about, of course — Watchmen is such a dense, multi-faceted, complex, and sophisticated narrative that it can literally take dozens of re-reads to unpack all it has to offer. It’s just more than a bit depressing that neither of the “Big Two” have produced a work of even greater quality in all the years since, and that the superhero genre has never had the guts to look at itself in the mirror this honestly again, despite being under a larger and more all-pervasive microscope than ever. 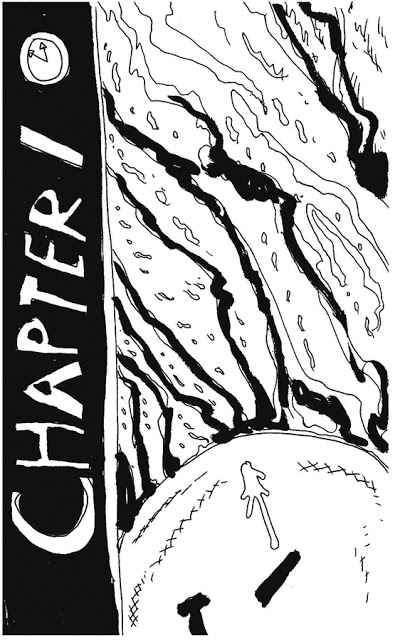 In all honesty, that’s probably decades — perhaps even centuries — away from happening, as well, but it’s certainly high time for somebody to at least have something new to say about it. Enter cartoonists Dave Baker, Nicole Goux, Rachel Dukes, Malachi Ward, Nick Diaz, Emilie Vo, Sam Ancona, Chuck Kerr, Colby Bluth, Robert Negrete and Sabrina Deigert, and their “mondo” self-published collaborative “jam” effort, Shitty Watchmen.  Baker, who’s selling the book via his website at http://www.heydavebaker.com , has stepped forward as the nearest thing to an unofficial spokesperson for the project in recent weeks, and while his standard line is that the book was designed to highlight Dave Gibbons’ often-overlooked contributions to the original work by proving  it’s so damn visually powerful that it even flows and makes sense when re-drawn in the “shittiest” manner possible, in truth he’s selling he and his compatriots’ perhaps-accidental (and perhaps not) achievements here almost criminally short — this, you see, is actually a nuts-and-bolts deconstruction of a comic that is, after all, a brilliant piece of deconstruction itself, and when you sit down and really think about that, it’s kind of like Russian dolls, isn’t it? You open one, and there’s another hiding inside it. At the risk of making Alan Moore cringe by even invoking the name, maybe Grant Morrison was exactly right when he said those things were a model of the universe.

Double-negatives being the equivalent of a positive, then, it would stand to reason that deconstructing a deconstruction would ultimately add up to being a reconstruction, and damn if that’s not the case here. In fact, I’m downright stoked to read Watchmen (yet) again now that I’ve seen its beauty besmirched so thoroughly. I’ve always loved it, of course, and always will, but as familiar as I am with every page, every panel, every sentence of it, I admit — it’s been awhile since I felt in awe of it. That deficiency in my viewpoint has already been corrected.

To get the obvious out of the way, then, yes — the art in Shitty Watchmen (formatted in such a way that each artist tackles a single chapter, except for Baker, who takes on two of ’em) is absolutely atrocious. That’s rather the point. Odds are better than good that each of the contributors involved can actually draw pretty well, but damn, they sure don’t do it here. To which I can only say — so what? The likes of Gary Panter and Art Spiegelman, among others, certainly don’t or can’t “draw well” on a purely technical level, but does that in any way detract from the power or immediacy of their work? Heck, in Panter’s case his decided lack of anything like “finesse” only adds to its visual impact, and the same can be said of much that’s on display here. Yeah, it’s uniformly crude. It’s ugly. It’s barely above kindergarten scribbling. It’s as “shitty” as it bills itself as being. And it also proves, without question, its over-arching thesis — that Watchmen as a whole, and Gibbons’ art in particular, is, if anything, under-rated. 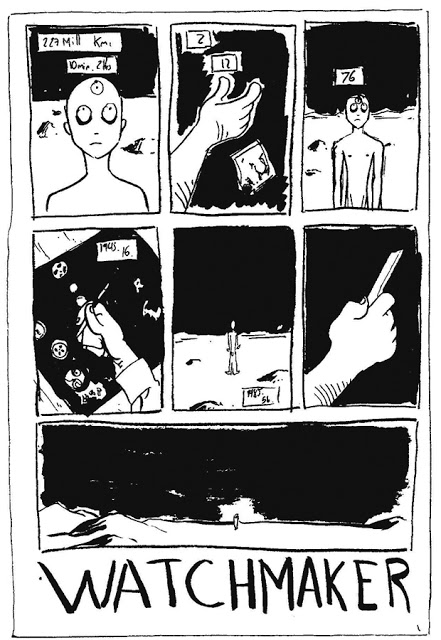 That’s probably a decidedly “uncool” thing to say in this day and age, where trashing Watchmen has become something of a fast-track to gaining instant “street cred” with the self-appointed “hip” and reflexively contrarian members of the comic book critics’ “community,” but I’ll let you in on a secret — a lot of that, perhaps even all of it, is a fucking pose. Divorce Watchmen from its context — whether asked for (“the first major deconstruction of the superhero genre”) or unasked for (“the book that started the ‘dark age’ in comics”) — and guess what? You’ve still got a soaring, ambitious, expertly-executed, revolutionary work. And if it takes reducing it to to a beyond-bare-bones shadow of itself in order to to either prove or remind people of that, so be it. Shitty Watchmen isn’t just throwing the genius of its “source material” into sharp relief, but people’s reactions to it, as well. A veritable “cottage industry” of opinion has sprung up around this comic over the years, much of it illuminating and some of it infuriating, but for my money I can’t think of any other interpretation of it that’s been this unflinchingly honest and utterly free of pretense. “We love Watchmen — let us prove it to you by wrecking it” may seem a contradictory assertion on its face, but often the most essential truths are hidden in some surprising places.

But it’s not just Gibbons’ art that is atomized on these pages — Moore’s script is presented verbatim only in chapter nine, while others either decimate it with as much gusto as they do to the illustrations or leave it out altogether (which is also the case with John Higgins’ color, this book being a strictly black and white affair). That’s a move certain to offend purists, and perhaps even a fair number of more casual fans, but are members of either camp all that likely to be interested in a project such as this in the first place?  Exactly. 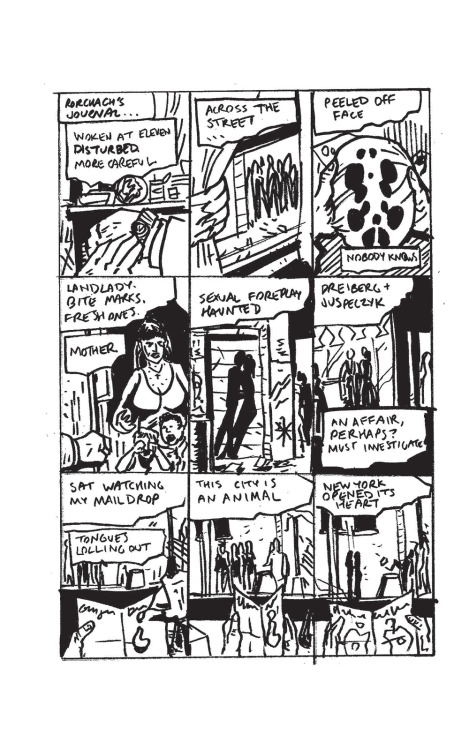 Admittedly, then, Shitty Watchmen is a book with a decidedly narrow focus that will appeal to a perhaps-even-more-narrow readership. For what it’s trying to do, though — and for those interested in what it’s doing — it’s a borderline revelatory experience. If you’ve ever wondered “Could Watchmen still be good — even if it wasn’t?,” then here’s your answer, and it’s a resounding yes. Turning the most celebrated work in the history of the graphic story medium into a sorry, sloppy mess may be a “shitty” thing to do, but it’s also a brilliant one.