Home  ⁄  The Wire  ⁄  [GRINDHOUSE COMICS COLUMN] SUPERMAN: THE COMING OF THE SUPERMEN #1 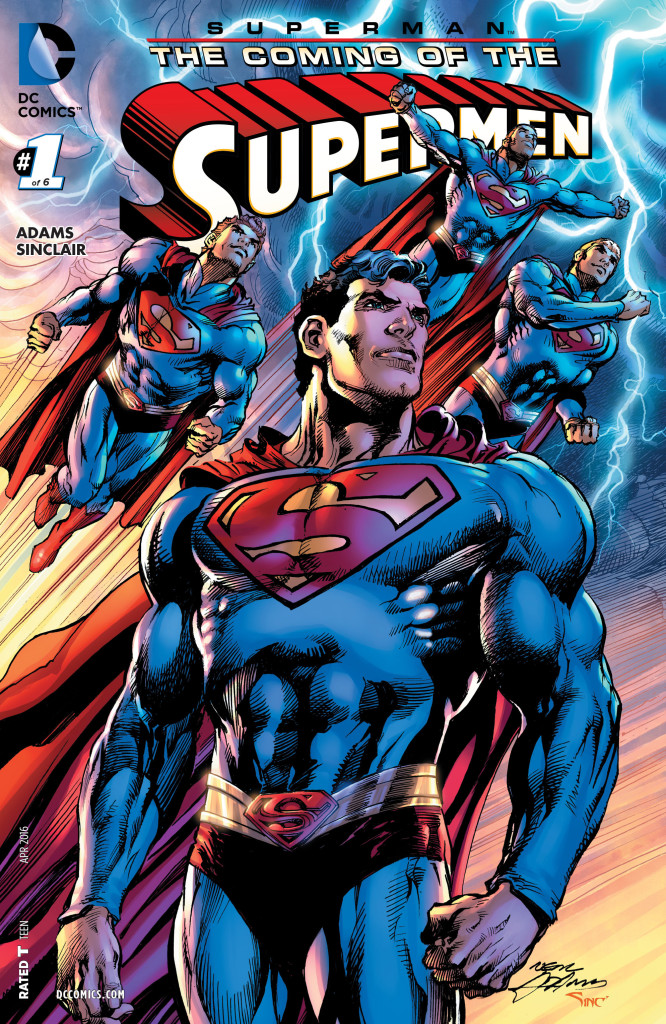 The name Neal Adams is still a legendary one in comic book circles, and I suppose it always will be, but who are we kidding? In recent years — check that, recent decades — it’s become synonymous with “batshit crazy” every bit as much as it has with, say, “revolutionary illustrator.” Neal’s been milking the fame he justly earned for his late-’60s/early-’70s work on titles such as Batman, Green Lantern/Green Arrow, Deadman, and The Uncanny X-Men for all it’s worth, and if I were in his shoes I’d probably do the exact same thing, but it took the release of his Batman: Odyssey series a few years back to remind folks that this is the guy who gave us Skateman, Ms. Mystic, and Armor, as well. Truth be told, comics fans are such a forgiving bunch (at least toward some creators) that those 1980s debacles from Adams’ own Continuity Comics imprint probably would have been remembered — to the extent that they were at all — as strange, even charming, curiosities if he hadn’t decided to dust off his keyboard and give it a go as both writer and artist again — with predictably disastrous, if highly entertaining, results.

Reaction to Batman : Odyssey was more or less universally negative, of course, but let’s not kid ourselves — it also exposed the rampant double-standards that exist among the largely-unpaid legion of critics out there. If, say, Grant Morrison came out with a 12-issue epic that featured Batman riding around on a pterodactyl in a hidden jungle kingdom in the center of the Earth, he would be praised to the heavens for being “post-ironic” and “making comics fun again,” but when our guy Neal does it, he’s chided as being “past his prime” and “soft in the head.” Granted, Adams’ much-publicized theories on the “hollow” or “expanding” Earth go some way toward buttressing the notion that he’s a more than a little loopy, but again, those ideas are no more “crazy” or “outlandish” than some of the stuff that’s come out of Morrison’s mouth over the years. Maybe Neal just needs to shave his head, declare that he has real-life superhuman abilities, and develop a nearly-impenetrable Scottish accent and all his eccentricities will be forgiven?

Or maybe — just maybe — his advancing age (he’s 75 as of this writing) is being held against him. It certainly wouldn’t be the first time that sort of wretched discrimination has reared its ugly head in fan circles. Jack Kirby, for instance, produced some of his best work toward the tail end of his career, but by and large comics like Captain Victory And The Galactic Rangers and Silver Star languished in the “also-ran” category for 20 or 30 years before even a few people began to recognize them as the deeply-personal meditations on timeless themes that they are.

Please don’t think I’m trying to advance an argument that Batman: Odyssey is anywhere near as good as those latter-day Kirby works, though, because it’s not. I’m simply pointing out a pattern — when legendary creators get long in the tooth, the public turns on ’em. It happened to Kirby. It happened to Ditko. It’s happening right now to Alan Moore, despite the fact that he’s producing some of the best work of his career. And, to a certain extent, it’s happening to Adams — although, in his case, his critics do have a point (or several, as the case may be). Neal really can’t write, and his personal obsessions really are of little interest to anyone other than himself, and yeah, by and large his art really isn’t as strong and compelling as it used to be — but that doesn’t mean that this late stage of his artistic oeuvre is any less interesting than his earlier, more celebrated period. Quite the contrary. 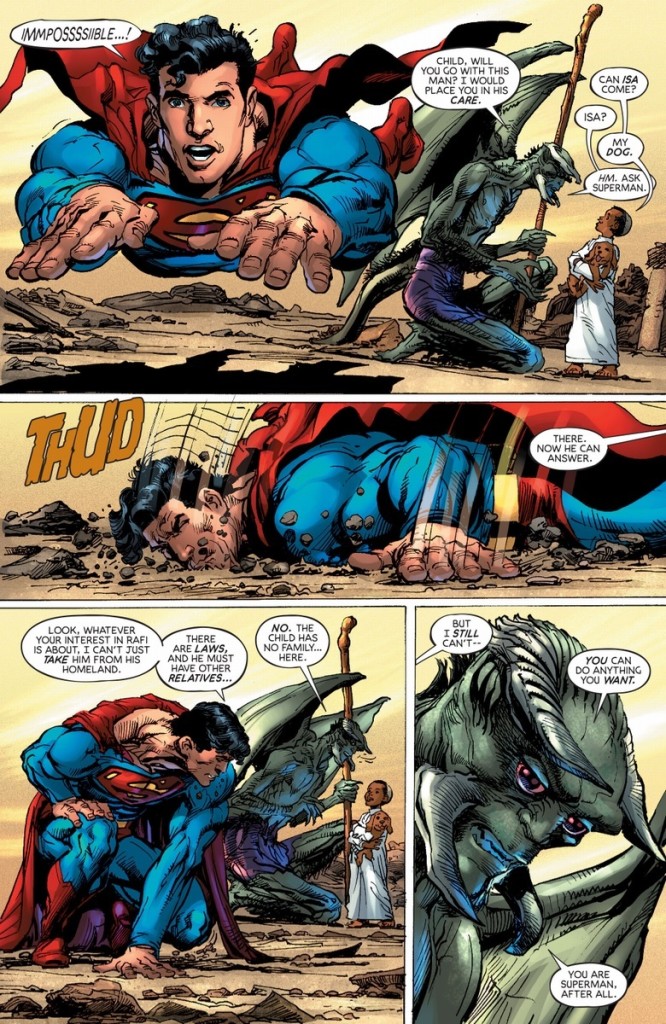 Which brings us to the first issue of his new six-part series Superman: The Coming Of The Supermen, where again Adams is pulling double-duty as both writer and artist (although it should be noted — even if the cover, in a less-than-classy move, fails to do so — that Tony Bedard is on board as a co-writer here, possibly to prevent the kind of editorial turnover that Odyssey understandably suffered from), but in all honesty this book actually seems downright tame, at least to this point, in comparison to Neal’s other efforts of recent vintage. True, it’s still about 50 times crazier than anything else in the staid, boring DC Comics line-up lately, and there are plenty of juicy hints interspersed throughout indicating that the wheels of sanity will almost certainly be coming off sooner rather than later, but the notable absence of things like our writer/artist’s penchant for — bizarre — and ill-timed — pseudo- dramatic — pauses in — his dialogue, and his marked tendency to spend page after page “building up” some massive would-be confrontation and/or revelation only to seemingly forget about it completely and move on to something else? Well, so far those things are being pretty well kept in check, which will sound highly improbable I’m sure once I tell you that this story concerns a contingent of three Kryptonians in costumes identical to Superman’s arriving on Earth (let’s call them sandy-blonde Superman, red-haired Superman, and black Superman, since we don’t actually know their names yet) and battling Kalibak and his army of Parademons in the LexCorp tower while the real Man of Steel is off in the Middle East for reasons never explained and after a military and/or terrorist skirmish there picks up a youthful orphaned boy and his dog under orders from a winged, green-skinned djinn and takes them back to Metropolis before promptly engaging in the Supermen-vs.-Kalibak battle himself and then re-encountering said djinn who takes him back in time to the period of the construction of the Sphinx in ancient Egypt whereupon he learns that the pharaoh who had it built was — Darkseid’s dad?

And yet — so far, at least, none of these disparate elements seem particularly incongruous or “weird,” at least by contemporary Adams standards, and the story has a fairly natural and unforced flow to it that stands in marked contrast to Batman: Odyssey‘s breakneck-paced parade of balls-out nonsense. Which means, of course, that Superman: The Coming Of The Supermen is both better and more boring than its most recent predecessor in the Adams canon. 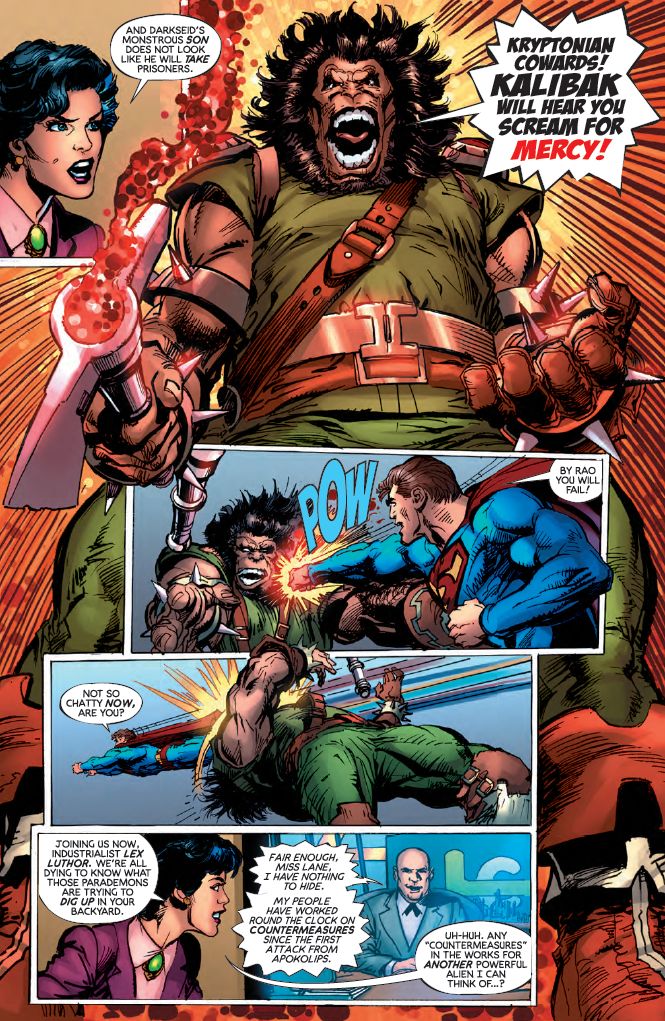 But enough about the story — for now, at any rate. Let’s talk about the art! Adams is definitely doing his level best to channel the spirit of Kirby here, but his “level best” simply ain’t what it used to be. The old one-time-revolutionary dynamics are still there, as are the inventive and highly pleasing page layouts, but I think Neal’s overly-melodramatic inking is really doing a disservice to his pencils here, and buries things under a tidal wave of thick, almost “greasy” cross-hatching. His near-photo-realistic facial expressions are occasionally still on display, so that’s a plus, but too often he seems to be taking some short-cuts in that department that have the unfortunate effect of making everyone look, at times, like some kind of mutated human/horse hybrid. The cover is plenty solid and packs enough of the old “Neal Adams Wallop,” as do a handful of the interior panels, but frankly too many of those look just plain rushed and sloppy. Not as sloppy as a number of the conceptually-dead variant covers that he’s been producing for DC this month as part of their promotional push for this book do — most of which are “re-imagined,” and highly diminished, modernized updates of his most well-known covers of years gone by inked by an all-star array of talents who still can’t manage to inject much life into them — but when you combine this second-rate art with Alex Sinclair’s garish and often just plain ugly colors, the end result is a book that looks like the portfolio work of a 16-year-old kid who’s going around to conventions trying to “wow” editors with his “Adams-meets-Kirby” pastiche-style artwork that’s been colored by his glue-sniffing buddy. Even some of the images that probably started out as a good idea at the breakdown stage — like a nice, big, half-page panel of a mouth-foaming Lex Luthor ranting into a television camera Bill O’Reilly-style — end up looking pretty crappy once Adams layers the thick, soupy embellishments on. It’s all interesting to look at, sure, and oftentimes quite arresting, but by and large I’d be lying if I said it was actually good. 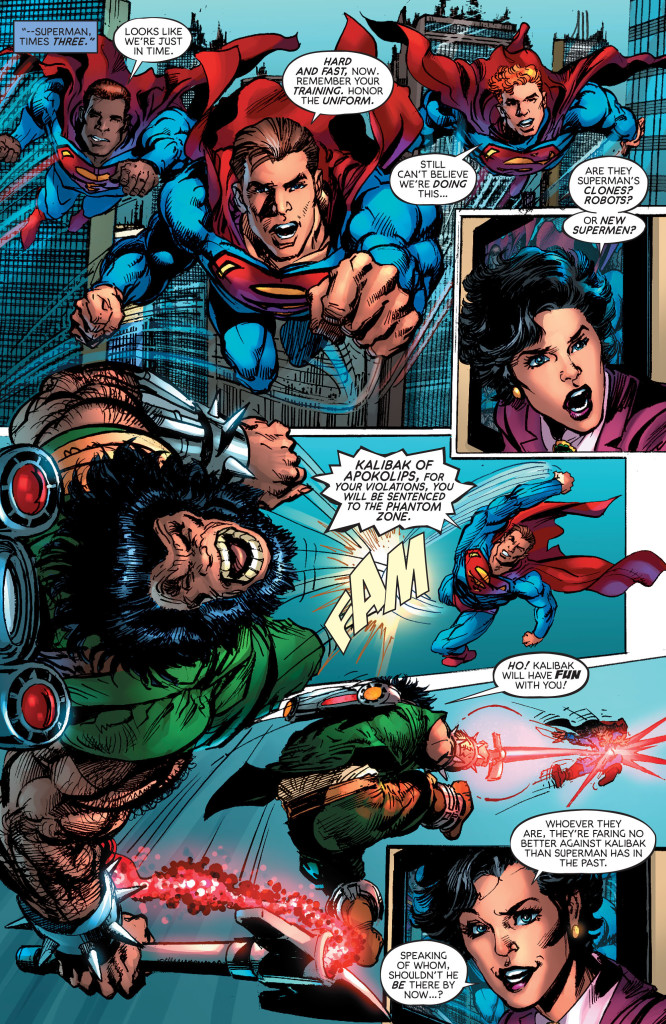 Still — I’m more than willing to concede that this series, numerous flaws and all, is probably going to be well worth following for six issues. Kieran Shiach over at Comics Alliance, for instance — the same site that made the brilliant observation that Batman: Odyssey was the comic book equivalent of Tommy Wiseau’s now-legendary “midnight movie” favorite The Room, and that spilled more “digital ink” analyzing that series than any other — advances a strong argument that The Coming Of The Supermen is a work of mad genius, which probably isn’t too far off the mark (I’ll certainly give you the “mad” part). The fact that it completely ignores post-Flashpoint , and even post-Crisis, DC continuity by having Clark Kent and Lois Lane still working as TV news anchors (Lois is seen providing live on-air coverage of the battle at LexCorp tower even though no cameras appear to be on-hand to film it?) certainly shows that Adams couldn’t be bothered to actually familiarize himself with how Superman stories work these days, and that’s a very good sign that his barely-restrained excesses are about to burst through in a big way, hopefully as soon as next month.

How, then, are we to judge a comic like this? Not by any sort of traditional definitions of “good” and “bad,” since that was never in the cards to begin with. What we want from a modern-day Neal Adams comic — and the only thing we have any right to expect — is unfiltered, unintelligible, unrestrained, and unapologetic insanity. And yet even by that less-than-lofty standard, the first issue of Superman: The Coming Of The Supermen falls short. There are tantalizing glimpses that there’s plenty of crazy in the offing, though, and that’s why I’ll continue to pick this book up. I hear a loud screech in the distance, and there might even be some smoke coming from the other side of the hill, but goddamnit — I need to see the full train wreck play out in excruciating, slow-motion detail.

Don’t let us down, Neal. We know you can do it.