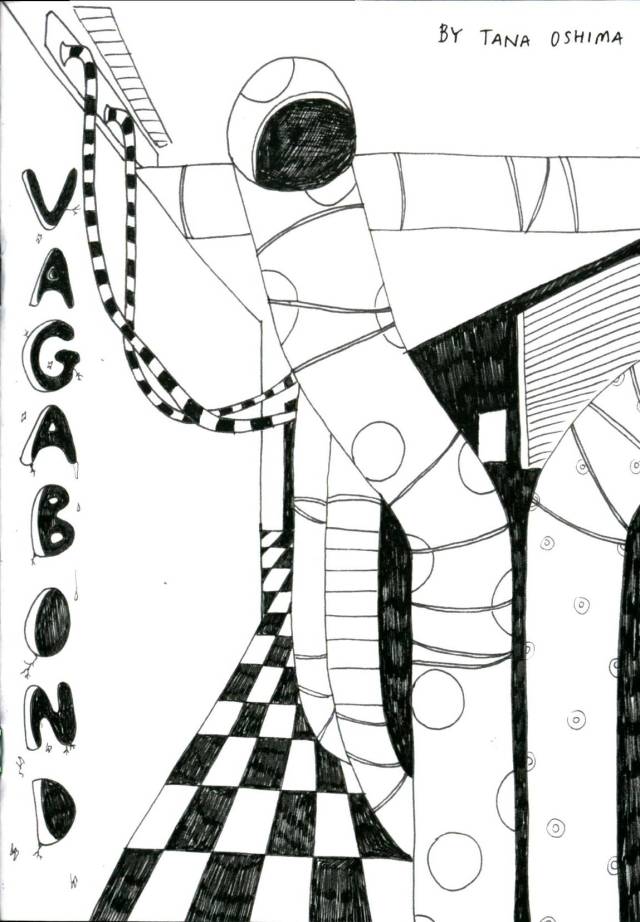 Here’s the thing — most “indie” comics creators, and even most “indie” comics readers, fancy themselves as “outsiders,” to one degree or another. Not only do we work on, or take pleasure from, an art form that is on the “margins,” but one that is on the very margins of those margins, divorced entirely from the industry that most people think of when they even do think of comics in the first place. When the small press and self-publishers are your “bag,” then you are, by both definition and default, “way out there.”

I think that sometimes we romanticize this “outsider” status, as well — I mean, we probably have to since none of us are in it for the money. We speak a secret language known only to us, one loaded with references and terminology those squares out there in the “straight world” could never understand. We’re interested in, writing about, making, or otherwise involved with a “scene” that is well and truly our own. I’m proud of how inclusive that “scene” has become in recent years, but who are we kidding? It’ll always be exclusive simply in terms of sheer numbers — because they’re so small. There’s no secret handshake or anything, it’s true, but there’s no real need for one: Only a small handful of people will ever be into this stuff.

And yeah, that’s cool — it means we’re all automatically part of a community of like-minded cartoonists, readers, or both. We tend to “get” where out “fellow travelers” are coming from. We have different tastes, sure, but we’re all absolutely committed to a medium very few will ever bother to concern themselves with. And yeah, sue me, I think that’s pretty great.

It’s one thing not to fit in by choice, though, and another thing altogether to never even be given the option to do so. 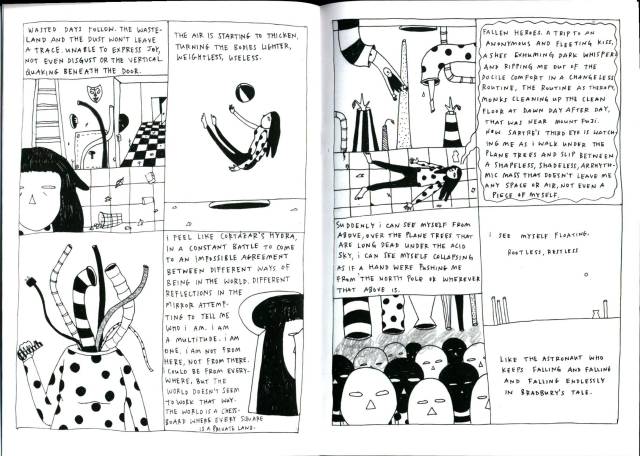 In the 12 densely-packed pages of her 2019 self-published comics ‘zine Vagabond, Tana Oshima composes a kind of visual poetic monologue that cuts to the heart of not belonging, of knowing that one has and will never belong, of finding oneself on the other side of a societal firewall that won’t let her belong.

Whether or not she wants to “fit in” is almost immaterial — the point, eloquently expressed herein, is that she’s not allowed to.And I’m sorry, but there’s something fucked up about that. 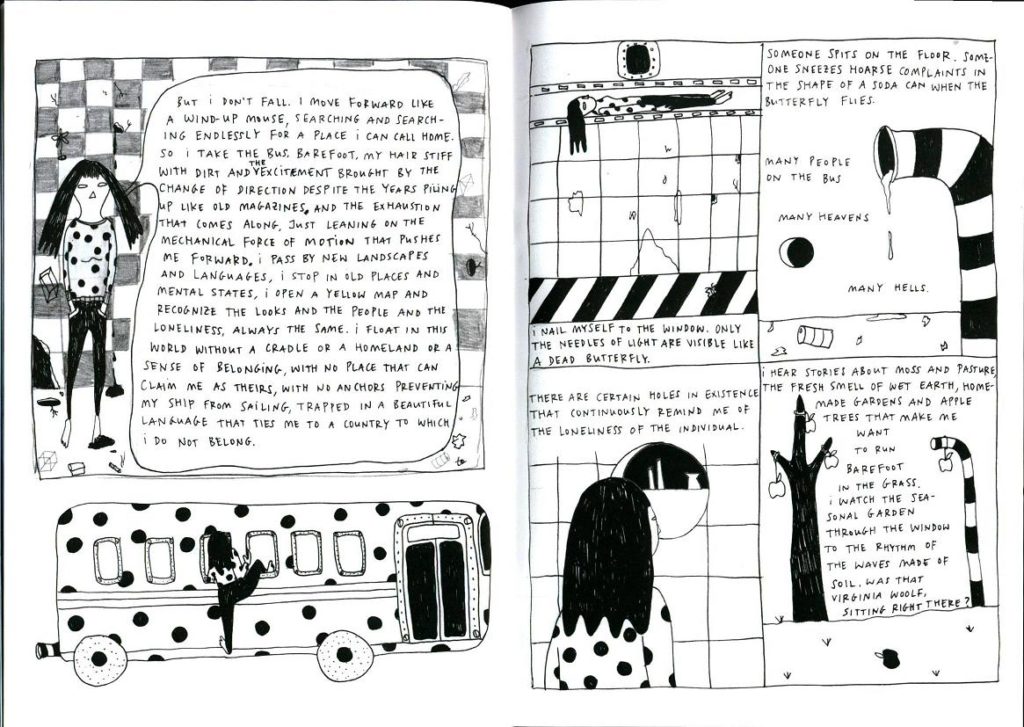 As an exploration of imposed loneliness, Vagabond is almost without equal in terms of its impact — an economy of quickly-scrawled lines lends visual immediacy and balance to words that are obviously chosen with care and precision and that even employ, by accident or design, a kind of measured tempo and meter, the cumulative effect being that both visual and narrative “languages” coalesce into an organic whole that is certainly unique to Oshima’s own experience and perspective, but one that holds within it, and consequently expresses, something universally understood and felt. We’ve all “been there” so to speak — but we haven’t all lived there, as Oshima does. As she’s forced to. 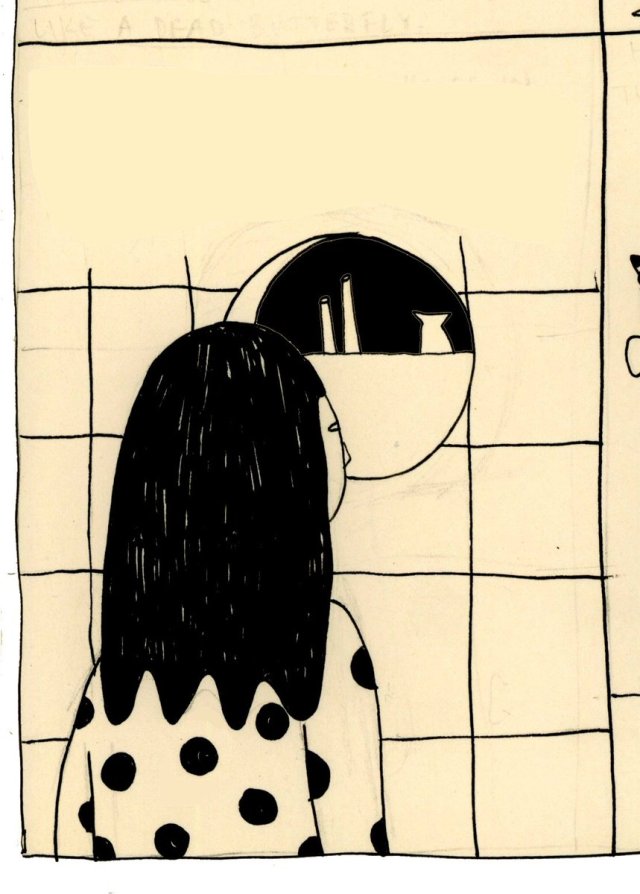 Recurring motifs drawn directly from her subconscious accentuate her full-time “Exile On Main Street” reality, even if they may seem unreal on their face, but go with the flow here: You needn’t be an immigrant, a child of immigrants, or even within a few generations of immigrants to feel your way through Vagabond — you simply need to be open-minded and open-hearted enough to listen to a voice that too frequently goes unheard, one as valid as anyone else’s but very (hell, depressingly) often overlooked for the sake of a kind of monolithic commitment to convenience and to not being bothered. If this comic upsets you, seriously — get over your privilege, get over yourself, and get real. Tana Oshima keeps it real from first page to last, and has crafted one of the finest comics in years.

You probably already know where you can get this, don’t you? Domino Books, of course, where it sells for $8. Here’s a link :http://dominobooks.org/vagabond.html