If you’re a cult movie enthusiast who loves VHS, it’s time to celebrate!

Grindhouse Releasing and Cult Movie Mania have joined forces to bring some of the most shocking films of all time to VHS for the first time in decades. Check out this lineup: CANNIBAL HOLOCAUST, CANNIBAL FEROX, Lucio Fulci’s THE BEYOND and CAT IN THE BRAIN!

Bring yourself back to the glory days of your local video store with the first two tapes: Umberto Lenzi’s CANNIBAL FEROX (aka MAKE THEM DIE SLOWLY) and Ruggero Deodato’s CANNIBAL HOLOCAUST. If you’re familiar with these titles, this is a chance to enjoy them like never before. If you’ve never seen them.. then you’re in for a treat.

The CANNIBAL FEROX tape will include the ultra-nasty, completely uncut feature film along with bonus video of the Cannibal Ferox Hollywood Premiere, an interview with director Umberto Lenzi, and trailers. It will also feature exclusive new artwork painted and designed by horror director Marcus Koch (100 Tears, ROT) and a poster only available with this edition of the movie.

The CANNIBAL HOLOCAUST tape will include the uncut feature film in its nauseating entirety, plus the Cannibal Holocaust music video and trailers. The striking new special edition artwork, featuring design by Chamuco ATX and illustration by Vader Paz, will come in three different collectible color variants. Each tape also comes with a matching poster exclusive to this release. 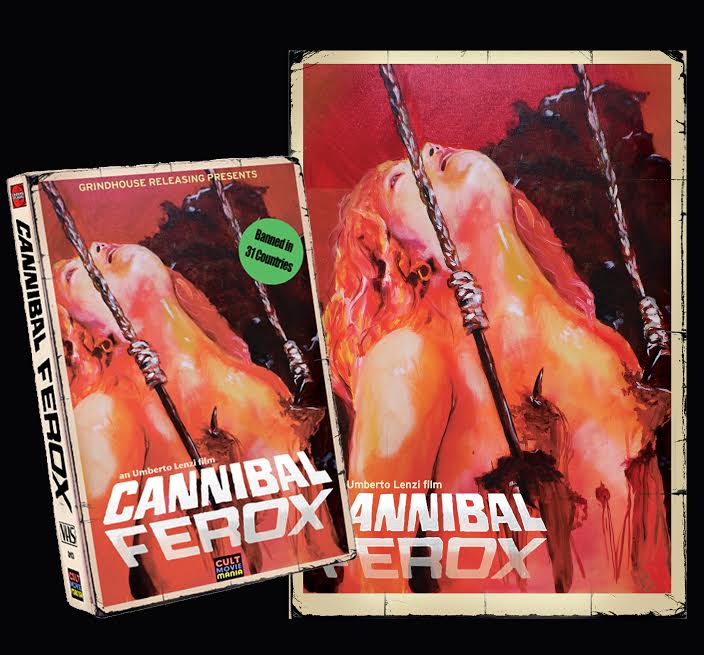 Cult Movie Mania has just launched a LIVE AUCTION where the highest bidder will win the original gory oil painting used for the Cannibal Ferox VHS tape. This sick and spectacular piece was painted and AUTOGRAPHED by gore FX masterand legendary horror director Marcus Koch specifically for these tapes.

This oil painting is a one-of-a-kind collectible you will never be able to get anywhere NOT ONLY THAT…the winning bidder will also receive all 4 of the upcoming cannibal collector VHS tapes. And these tapes will be the only collectible cannibal tapes on BLUE CASSETTES. 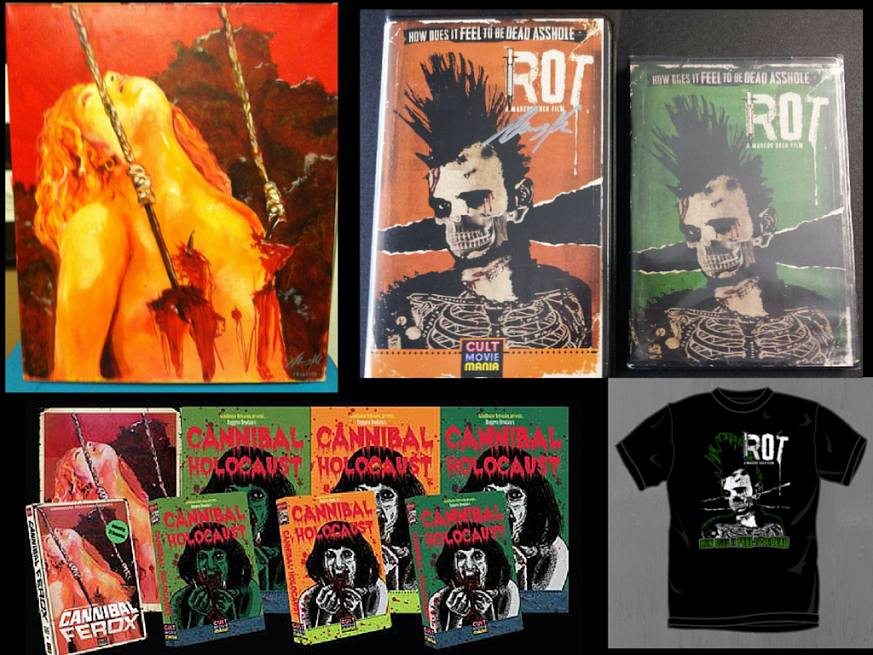 The WINNER WILL ALSO RECEIVE: 4 collectible cannibal posters, 1 of our long gone ROT VHS tapes, a ROT DVD, and a ROT T-shirt. Together, that’s the painting, 5 collectible tapes, 4 posters, 1 DVD, and 1 T-shirt.

BUT TO WIN, YOU MUST BID HERE!

In the coming weeks, GRINDHOUSE RELEASING and CULT MOVIE MANIA will also be releasing a LUCIO FULCI VHS DOUBLE FEATURE containing his masterpiece THE BEYOND and the ultra-bloody CAT IN THE BRAIN. That will be followed by the first ever VHS edition of AN AMERICAN HIPPIE IN ISRAEL, the long-lost, completely insane Israeli-made hippie cult classic that will freak you out.

These tapes continue GRINDHOUSE RELEASING’s tradition of bringing the most outrageous – and bloody – movies to film fans around the world. And they are the latest additions to CULT MOVIE MANIA’s line of popular collectible VHS tapes, which have all previously sold out. Don’t miss your chance to get these must-own horror collectors items.

Due to limited quantities, these tapes will be available on a “first come, first serve” basis with subscribers to Cult Movie Mania’s FREE email newsletter receiving the exclusive chance to pre-order tapes in advance. If the tapes sell out via newsletter, they will not be made available to the general public. Anyone can sign up for the newsletter and it is 100% FREE. Sign up now at CultMovieMania.com.