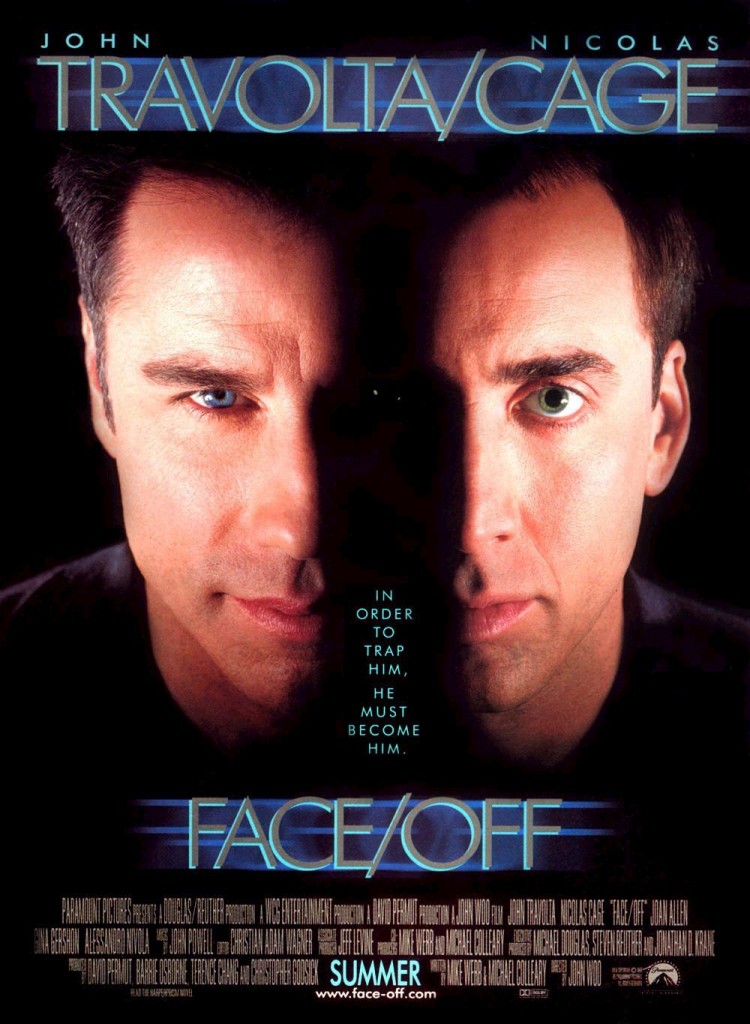 What kind of action-movie fan are you? One way to find out is to consider which 1997 Nicolas Cage film you prefer: CON AIR is silly and trashy, the cinematic equivalent of a beach read — nothing wrong with it; those are fun, they get the adrenaline surging.

But FACE/OFF has two major virtues in its corner: (1) Sincerity, which is more of an assumption on my part, and (2) craft, which is a quantifiable absolute. Seeing FACE/OFF on the big screen, which I did last year but which I hadn’t done since I saw it three times during its theatrical release, I was struck by the mechanics of John Woo’s orchestration of action. It’s a routine rant coming from me, but action films have lost so much with the trend towards hand-held camerawork — the sweeping motions of John Woo’s set-ups match and enhance the emotional moods of the piece. The critical cliché when it comes to John Woo’s films is that they are a “ballet of bullets” (or some such variation). It’s used a lot because it feels apt, but let’s not overlook the fact that these films can feel like opera — nowhere is that clearer than here, in John Woo’s single best American film.

On a story level, FACE/OFF is packed with nearly as much absurdity as CON AIR. It’s set in a near-future where face transplants can be used for a federal agent to go undercover as a terrorist-for-hire and where maximum-security prisons run on magnets. It’s an out-sized movie in every way, with widescreen cinematography by Oliver Wood (NEON MANIACS), a bombastic score from John Powell (maybe the best Hans Zimmer score not actually composed by Hans Zimmer), and, of course, two lead performances from two of the most shameless hams of the past fifty years of screen acting. I mean that in a good way: It’s good to be shameless. There’s too much shame these days. This movie is bold. The visuals create an epic visual space, and the two stars manage to fill it. If Woo is a director of violent ballets, then he does well working with John Travolta, who is a dancer after all.  And if FACE/OFF is modern opera, then it’s a natural home for Nicolas Cage, an actor who has no problem going big. In fact, he’s just waiting for the next available opportunity to do just that.

Here Cage plays the impossibly-named Castor Troy, a madman with a proclivity for explosions. He loves only two things: His computer-hacker brother Pollux, and grabbing lady-butts. (He grabs a lot of lady-butts in this movie. More than you may remember. And that seems to do it for him.) The opening scene of the movie shows Castor making an assassination attempt on Sean Archer (Travolta), the man who has been hounding him. The bullet rips through Archer and kills his young son, who was riding a merry-go-round with him. [Shouldn’t Castor have waited until Archer got off a moving carousel?] Archer lives, and six years later, after a pretty elaborate chase scene involving a plane — this movie begins the way many action movies, last year’s FAST & FURIOUS 6 included, end — he arrests Pollux and kills Castor (or so he thinks). But the brothers have set a ticking bomb to take out a square mile of populated Los Angeles real estate, so Archer submits to a pioneering face-transplant procedure so he can enter a maximum-security prison to get Pollux to reveal the bomb’s location. 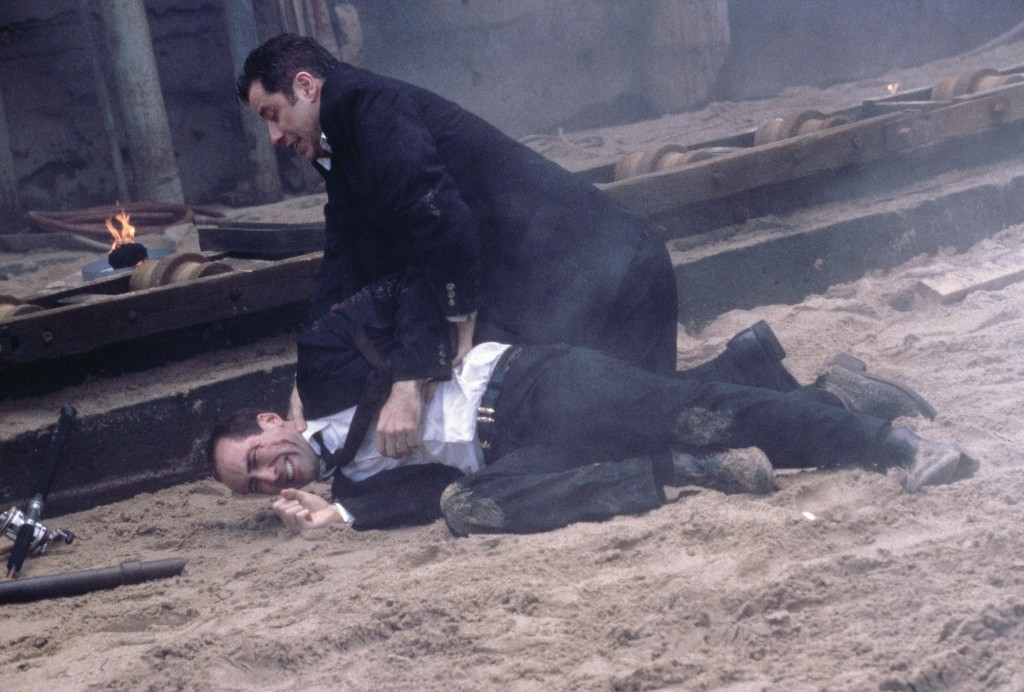 In other words, for the first act of the movie Travolta plays the stalwart hero and Cage the deranged villain. Then Cage becomes the hero, but in the body of the villain. When Castor Troy comes out of his coma — in a scene very much like the Joker’s creation in Tim Burton’s BATMAN — he takes Archer’s body and torches the lab, and now Travolta is playing the villain, destroying his enemy’s life from the inside. He takes over Archer’s job and his family, and this movie goes to some pretty perverse places for a mainstream Hollywood blockbuster. Really, Cage gets the meatier role, especially since Travolta had already done the swaggering bad-guy thing for Woo in 1996’s BROKEN ARROW. Travolta has fun mimicking some of Cage’s more obvious mannerisms, but it’s Cage who gets to swing from the most drastic extremes, from the sociopathic and anarchistic maniac to the vulnerable, beleaguered, and cornered good-guy-on-the-run. Travolta is really good, but Cage is great.

Many people I’ve seen the movie with since 1997 have giggled every time the Archer family did their trademark gesture, of waving a hand over the face of a loved one — I can agree that this happens maybe three times too many, but I also think it’s key to both this film and to Cage’s career as a whole. I’m not sure if this idea was in the original script by Mike Werb & Michael Colleary, or if John Woo himself came up with it. Maybe it was one of the actors. Maybe it was a Cage-ism. Or it could have been this guy. 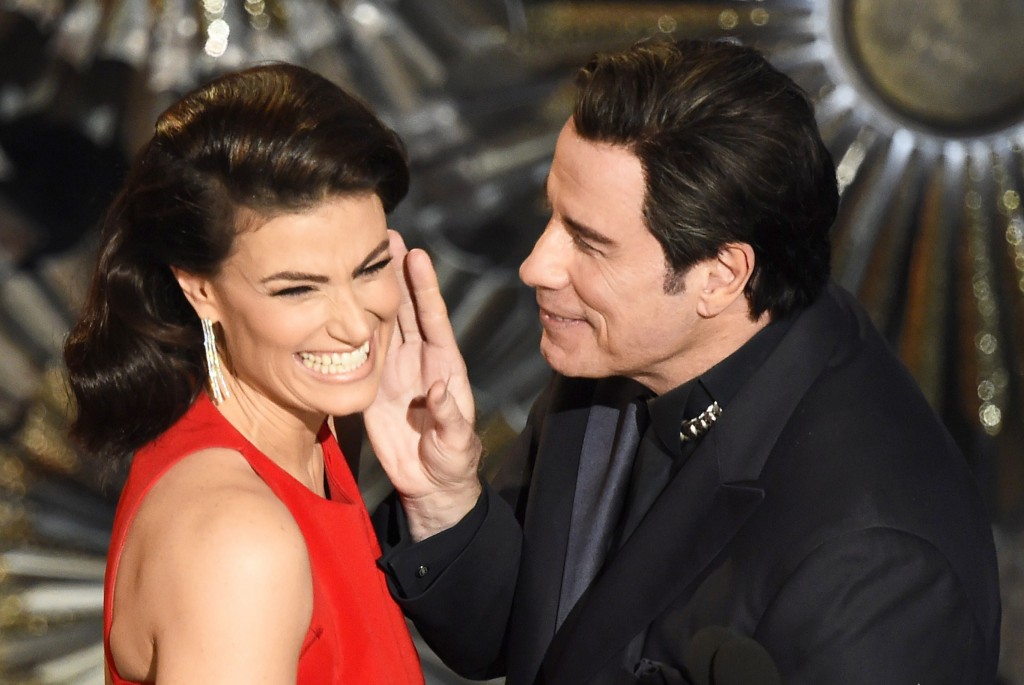 Audiences in 2014 laugh at such overt sentimentality and obvious symbolism, but I’d argue it comes about honestly — first of all, John Woo’s cultural background is Chinese, where even today such business might not be laughed away, and also, John Woo grew up on old-Hollywood musicals, where florid gestures indicate key character moments. If Nicolas Cage has such a moment in a John Woo film, it’s sincere. John Woo takes the emotion of an action film seriously, and Cage is rarely less than fully committed. That said, when Cage’s character in CON AIR is monomaniacally focused on a stuffed pink bunny which he means to give to a daughter he never met, it’s entirely played for laughs. When Simon West does sentimentality, it’s a gas. When John Woo does it, it’s from the heart. The beauty of Nicolas Cage is that he means it both ways, in both cases.

FACE/OFF plays tonight at the Alamo Drafthouse in Yonkers.