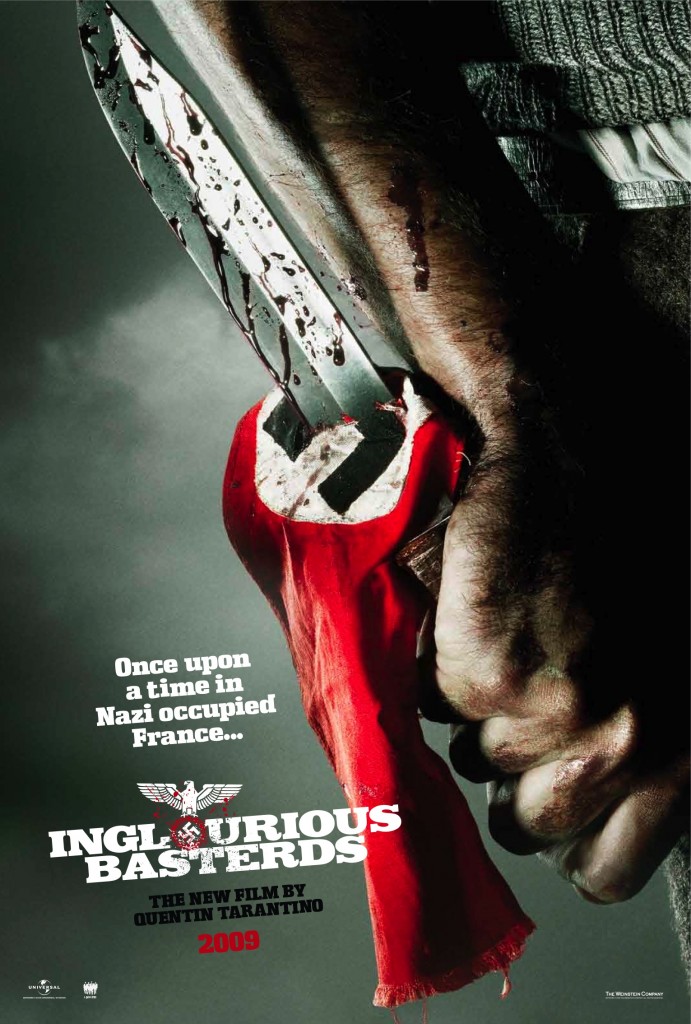 INGLOURIOUS BASTERDS was released on this date in 2009. For that occasion, I am pleased to run this reflection on the film by Andrew Seifter. Here’s what he had to say about this devious, controversial and masterful film. 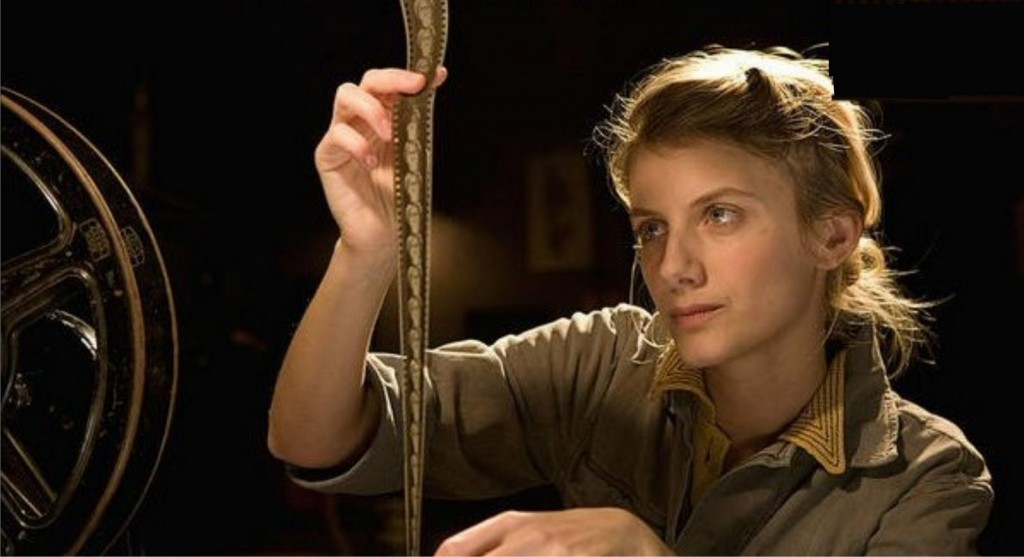 Quentin Tarantino was born to make this movie. That’s the first thing that came to mind when I left the theater after watching INGLOURIOUS BASTERDS.

Tarantino, the master of the modern-day revenge movie, had fine-tuned his craft with films like KILL BILL and DEATH PROOF, in which the viewer was literally more foaming-at-the-mouth and blood-thirsty than the protagonist by the end. But how could Tarantino top the need for revenge that he created in his viewers’ hearts and minds in those flicks? Only by creating the ultimate revenge scenario, of course. 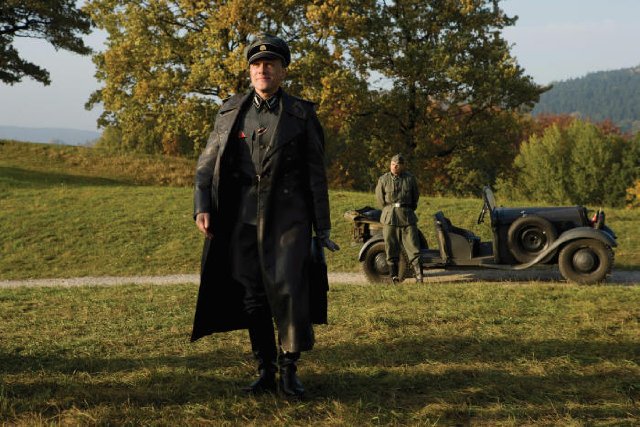 Enter the Nazis and the Holocaust. No author or screenwriter has ever imagined an act of evil greater in magnitude than that inflicted in real life by Adolf Hitler and the Nazis on the Jews in the 1930s and 1940s. This is not to say that the Holocaust was worse than other acts of genocide, and comparing those types of atrocities is impossible. The point is that genocide is the ultimate act of evil, and the Holocaust is the act of genocide most recognizable to American – and more broadly, Western — audiences.

Perhaps Jews like myself react to this movie in a more powerful way than audiences as a whole, but I’d wager that the sense of injustice and passion for revenge is pulsating in all audiences. Anyone who didn’t come to the theater craving some Nazi skull-crushing surely was ready to join the mob after witnessing the first scene, in which the movie’s primary villain, “The Jew Hunter,” SS Colonel Hans Landa, uncovers and murders all but one member of a Jewish family hiding in the rural basement of a French dairy farmer.

In addition to the Jewish-American “Basterds,” the film also features a number of French heroes, giving French audiences plenty to like. But most interesting of all is that German audiences reportedly love this movie, and enjoy seeing the Nazis get their just desserts every bit as much as the Jewish kid from Brooklyn does. A September 4 article by Paul Hockenos for the Global Post cited several Germans explaining why they, too, wanted revenge on the Nazis for their crimes:

One of Germany’s foremost critics, Georg Seesslen, in the magazine Der Spiegel, noted that INGLOURIOUS BASTERDS was the first film to actually show Hitler die. Why, he asks, had no one ever thought of killing off Hitler on the silver screen? By the end of INGLOURIOUS BASTERDS, he wrote, Hitler is “more than dead. He is kaputt — all shot up, burned and chopped to pieces.” All other films symbolically left the book open, thus turning Hitler’s evil itself into a spectre that never perished. By implication, Germany could never be “normal” because Hitler lived on, at least on film.

These reactions make a lot of sense, if you think about it. Regular people in Germany who were born many years after World War II have grown up with an inescapable sense of shame for the actions of their grandparents and great-grandparents. Some younger Germans have never even met a living person who was a Nazi, yet they remain imprisoned by this horrible legacy. These people are also victims – in an indirect way — of the Nazis crimes, and they want their revenge.

Now, some will surely argue that the point of the movie is to show that there is the potential for horrific brutality in all of us, not just the Nazis. For instance, Hockenos reported:

Yet, another review commends Tarantino for finally debunking the insinuation that Hitler embodied some unique kind of wickedness from which the rest of humanity is immune. During the film, for example, most people in the audience seem not to object to the gory death sentences that the Basterds mete out to the Nazis. Who feels sorry for fascists? But Tarantino, he argues, turns the tables on the viewers. The sadistic cruelty of the Basterds is much the same as that of the Nazis. Yet since the punishment appears justified, the viewer finds himself identifying with the violence in a way that one could never identify with much the same brutality when perpetrated by Nazis. Hitler’s evil and the Nazis’ cruelty suddenly become less singular.

There’s some truth to this. There is definitely a sense of relativism in the movie: Landa and some of the other Nazis are layered characters, not simply caricatures, and the Basterds’ entire reason for being is to throw the Nazis’ own ruthlessness and brutality back in their face. Plus, the fact that individuals are complex and don’t always fit neatly into a black-and-white, good-vs.-evil storyline is exemplified by the absurd and ultimately tragic interaction between Shosanna Dreyfus, the French Jew in hiding, and Frederick Zoller, the naïve Nazi war hero who has a crush on her.

But none of this should be misconstrued as INGLOURIOUS BASTERDS being apologetic about the Nazis’ crimes. To the contrary, the film is always first and foremost about the Nazis finally getting what they deserve.

One criticism INGLOURIOUS BASTERDS received was that not enough time is devoted to showing the Basterds enacting revenge on Nazis. It’s fair to say that the title of the movie is a bit misleading, because the movie isn’t really about the team of American super-Jews sent to Europe to get the bad guys. In many ways, Shosanna steals the show from the Basterds, but inappropriate headline aside, I’m not convinced that’s a bad thing. It’s easier to identify with her singular story than with those of a bunch of different Basterds — plus, she’s pretty and they’re not. In the end, I’d probably enjoy an entire movie about the Basterds, but I’m not sure I’d enjoy it more than the movie Tarantino actually made.

The most damaging potential criticism this film could receive, however, is that it trivializes the Holocaust by using it simply as a setting for graphic violence. But since this movie so thoroughly rewrites history, those complaints seem misplaced. A film that is seeking to capture a historical episode invites experts to closely scrutinize whether it fairly depicts what really happened. But INGLOURIOUS BASTERDS seeks only to depict how people feel about the Holocaust, and dramatically changes what actually happened, thereby perhaps helping Jews and Germans alike feel some closure that real life events did not afford.