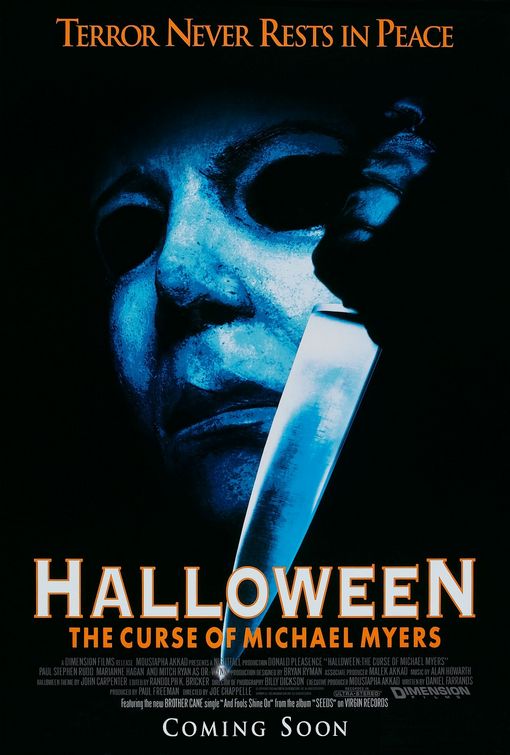 Ask any fan of the Halloween franchise to tell you the worst movie of the series, and I guarantee that one of the top contenders for the title will be HALLOWEEN 6: THE CURSE OF MICHAEL MYERS. A big reason for this is that the filmmakers involved attempted to explain the evil of Michael Myers. For those that haven’t had the joy of catching numbers 5-6 of the HALLOWEEN flicks, in them we are introduced to an ancient Druidian cult called the Cult of Thorn that would, through the use of rituals and powerful runes, influence a person to sacrifice their entire family on the night of Samhain in order to appease a bloodthirsty entity, thus protecting their village from its unholy wrath. Tommy Doyle (played by a shifty-eyed Paul Rudd) lays it all out for us here:

Thorn didn’t officially exist in the franchise until H6, and was only hinted at during the ending of H5, when Dr. Wynn/The Man In Black busted Michael out of jail. Between the Theatrical and Producer’s cuts of H6, Thorn’s mythos got murky. While the Theatrical Cut posited the Cult as merely a scientific tool that was used toward Dr. Wynn’s unethical purposes, the Producer’s Cut of H6 (the version I prefer) revealed that multiple residents of Haddonfield made up the Cult of Thorn, and were attempting to continue the ancient tradition of blood sacrifice using Michael Myers. As far as the Cult was concerned, they were doing the right thing by letting a single bloodline take one for the team, saving millions of mortal souls in the process. This was the explanation given for Michael’s unstoppable bloodlust, and though it was entirely dismissed for HALLOWEEN: RESURRECTION and beyond as non-canon by the fandom, the storyline had a rad premise.

As a Michael Myers fan and a horror enthusiast, I want to see the Cult of Thorn narrative explored.

The potential is immense. This wouldn’t be a remake or a reboot, nor would it have to be a prequel; it would simply be the exploration of a single plot element, outside of the storyline from which it was conceived.

There are those that will disagree with this immediately. Entire message boards and horror forums have unleashed their wrath upon me in the past when I’ve admitted to appreciating the whole Thorn angle.

“The Cult of Thorn narrative is a franchise-killer!”

“It added unnecessary mysticism to the plot! WHY explain The Shape?! He just IS!”

“I will NEVER accept it as canon!”

Fear not, fellow slasher fans… You don’t have to accept it as canon. I’m not gunning for that. You’re right, the attempt to whip up a mythos around The Shape does dull some of the terror and might be better off as a sort of alternate universe tangent. Moreover, the makers of H5 and H6 weren’t unanimously on board with Thorn. They were at odds with each other over continuity, and screenwriter Daniel Farrands’ vision was a far cry from that of director Joe Chappelle. Add in a few more suggestions from the Akkad family (longtime custodians of the franchise) and the Weinsteins/Dimension Films, and you have a complete artistic impasse. This is why we have two cuts of the same film with wildly different plots and endings. So I get it; we should leave Michael Myers alone.

But what if we take the Cult out of Haddonfield?

— We can figure out whether or not the cult’s cause is legit. One of the biggest flaws in HALLOWEEN 6 is that despite learning what the cult is and why The Shape (Michael) is such a force to be reckoned with, we never actually find out if this evil entity they sacrifice to is real. Assuming it is, you’ve got the potential for some Grade-A conflict by way of the classic “the needs of the many vs. the needs of the few” quandary.

— If the demonic force is pure b.s., then you’ve got a chance to probe into religious hysteria territory. What if there was no demon, but those who undergo the ritual to receive the curse truly believe that they are now unstoppable and have carte blanche to do the unspeakable things they’ve been suppressing in their minds for years?

— We can go back to the Iron Age, to watch the beginnings of the Cult unfold. Hell, if the origin is solid enough, it could be repeated throughout history. Druid spiritual history (and Celtic history at large) is rife with themes of death and rebirth, and darkness and light. Be it feature films or an original streaming series, the Cult has storytelling promise.

— It’s worth considering that even if we were to continue within the HALLOWEEN 5/6 canon, there’s still room to delve into the Thorn domain. Whose bloodline was given the curse before the Myers family? How did the cult make their way overseas? When did the Curse of Thorn arrive in Haddonfield? Even if filmmakers went this route and only alluded to the Myers clan in passing, it could make for a great prequel of sorts.

All things considered, the Cult of Thorn is an interesting yarn, one worth spinning outside of the HALLOWEEN series. If we want to collectively wash our hands of 4-6 and pretend they didn’t happen, then fine (I’m still gonna rock that entire Blu-Ray collection if I ever get my hands on it, though). But there’s really no need to throw the baby out with the bathwater; we can keep the Cult, turn back the clock a few centuries, and see where it takes us. If you agree, share this post with the hashtag #BringBackThorn and spread the word!