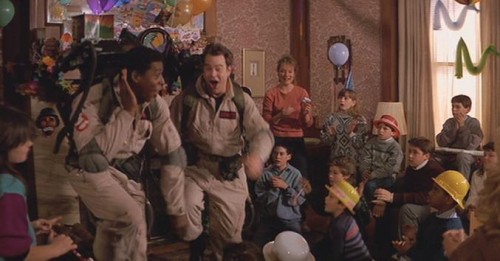 My love for the original GHOSTBUSTERS is infinite, and the sequel is the only one I got to see in the theaters, so it took me a lot of distance before I could ever admit to the flaws of GHOSTBUSTERS 2. I get it now. It’s not a great movie. It isn’t the stone classic the first one inarguably is. Fine. That doesn’t mean there isn’t plenty of goodness happening around the edges of the under-cooked main plot about rivers of slime and demon paintings and weirdly-accented demon-painting familiars.

For one thing, I’m not about to overlook any movie where cinematographer Michael Chapman gets to shoot New York City. The man shot some of my favorite New York movies ever — TAXI DRIVER, THE WANDERERS, RAGING BULL, SCROOGED, and QUICK CHANGE — and here he’s taking over for the legendary László Kovács, who gave the original GHOSTBUSTERS (and the New York City of 1983/1984) such a timeless look. Chapman gives us a movie that is more recognizably 1989, but it’s still got more widescreen pop than most comedies ever get near.

For another, I will argue for the comic excellence of the opening bunch of “Whatever Happened To?” opening scenes, which establish what these guys have been up to since they saved Manhattan from paranormal ruin five years previous – Harold Ramis as Egon Spengler has gone back to academics, while Dan Aykroyd’s Ray Stantz and Ernie Hudson’s Winston Zeddemore are playing kids’ birthday parties. Best of all, Bill Murray’s Peter Venkman is making a living as a TV psychic talk-show host. (Which Sigourney Weaver’s character somewhat predicted in the original, when they first met!)

This isn’t a rehash of the first movie; it’s a believable, logical, surprising, and very funny extension of what would most likely be happening five years after the first movie ended. GHOSTBUSTERS 2 doesn’t really get into trouble until the basic plot kicks in, but even then there are still great bits such as Rick Moranis as former accountant Louis Tully, now representing the Ghostbusters in court since he’s all they can afford.

Despite whatever flaws the film may or may not have, all of the character beats between the main guys, and particularly between Bill Murray and Sigourney Weaver, feel completely right to me. This is five years after these dudes saved the world and since Venkman got the girl, but in the interim that romance petered out (no pun intended) for realistic relationship reasons. Just because two people kiss at the end of the movie doesn’t mean they’ll necessarily be together forever. Is there another sequel that has addressed something this real? As goofy and corny as it is in so many places, GHOSTBUSTERS 2 is also a movie about a guy who realized he let one of the good ones get away. And now she’s got an infant son. Bill Murray plays those moments so well. “You know, I should have been your father. I mean, I could have been. ” Am I the only guy who’s ever gone on Facebook and seen a baby picture on the wall of some long-ago girl and thought something similar? Or is that just more evidence of my own weirdness?

More than anything, it’s just a pleasure to have this group assembled again. I’d rather hang with these characters in a problematic movie than most other characters anywhere else. GHOSTBUSTERS 2 gives Sigourney Weaver more of a chance to interact with Harold Ramis and Dan Aykroyd than she did in the first movie. Harold Ramis didn’t act too much after this movie, nor did Rick Moranis come to think of it. Dan Aykroyd and Bill Murray never teamed up again, to my knowledge. And what a pleasure to get to spend more time than before with Ernie Hudson, as likable an actor as I could ever name. (Also, an actor with access to the Fountain Of Youth — he looks five years younger this time around.)

There are a few regrettable scenes to skip past (i.e. the ghost baby carriage; whatever that pink thing in the bathtub is supposed to be) and Randy Edelman’s score is nowhere near as iconic and lovely as Elmer Bernstein’s work on the original, but I’m a person who’d rather look at the assets than the demerits. I’m an assets man. Perfect movies are pretty rare. Sometimes you have to yield your critical eye a little and loosen up. There’s no way this thing is a total wash. If you’re combining Harold Ramis with Ivan Reitman and Dan Aykroyd you can’t help but come up with a ton of hyper-specific and hyper-quotable dialogue, and if you’ve got Bill Murray on board you’ve got the best comedic leading man of the past few decades, and that’s the value of GHOSTBUSTERS 2. So there.

For more on the incredible Harold Ramis, who the world lost this year, please see this tribute.

Parts of this piece originally appeared over on Rupert Pupkin Speaks.