Home  ⁄  The Wire  ⁄  ‘THE HAUNTING OF SHARON TATE’ Is A Flat, Irresponsible Appropriation Of Real-Life Tragedy

When you make a genre movie based upon real-life horrific events, there’s a certain responsibility of the filmmakers to treat the subject matter with care. There are multiple ways to do this. You can film in black and white to desaturate the gore: Villeneuve brought earnest seriousness to POLYTECHNIQUE by doing this. You can fictionalize the names and places involved in the events: most slasher fans know which leather-faced individual in horror cinema history is based upon serial killer Ed Gein. Horror in particular makes common use of actual heinous crimes as inspiration for its stories. The problem arises when the filmmakers appropriate true events in the service of a story that adds little to no value. Unfortunately, writer-drector Daniel Farrands‘ THE HAUNTING OF SHARON TATE falls victim to that shortcoming. 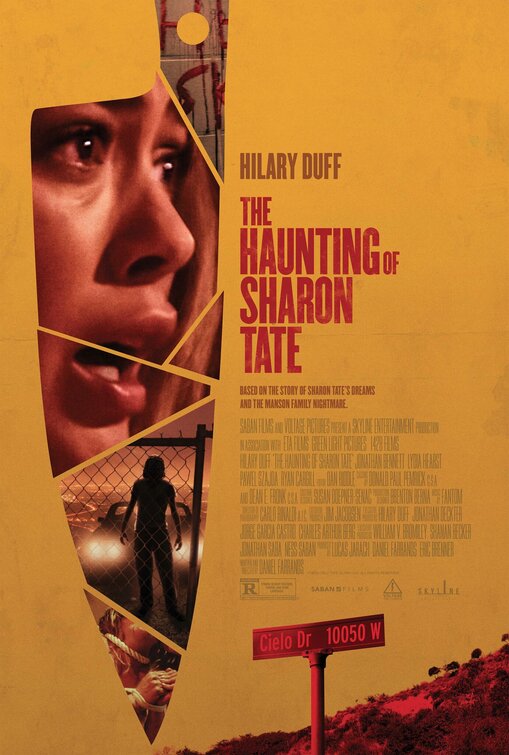 The summary goes that actress Sharon Tate (Hilary Duff) leaves her husband Roman Polanski to finish his film abroad, and returns to their sunny, sprawling California home in the summer of 1969. She’s very pregnant and her star is rising. Before the infamous murders that we’ve all read about, Tate is beset with grim visions of her own death and the brutal murder of her friends. When she encounters Charlie Manson (Ben Mellish) and members of his Family, the threat to her life becomes unavoidable.

The film opens with an Edgar Allan Poe quote, “Is all that we see or seem but a dream within a dream?”  What follows is one of Sharon Tate’s premonitions, in which the Manson Family carries out the senseless murders of Tate, Jay Sebring (Jonathan Bennett), Abigail Folger (Lydia Hearst), and Wojciech Frykowski (Pawel Szajda) on August 9th, 1969. Anyone who has a worn-out copy of Vincent Bugliosi’s Helter Skelter can attest that, save for a few Hollywood liberties, the scene is fairly accurate down to the positions that the bodies were discovered in and the nature of the wounds inflicted. The crime itself was awful enough in real life, inspiring me to recoil in disgust as I read about the events decades after the fact. But the depiction and usage of the crime as a vehicle for a fictional narrative here only inspires one word: why?

Tate’s premonitions serve as both the genesis of the film’s horror and the catalyst for an unpacking of a hefty theme: when Tate tries to tell her friends Abagail, Jay, and Wojciech, they dismiss her and imply that she’s losing it. Groundskeeper Steven Parent (played by Ryan Cargill) is the only person who believes Tate, and uncovers subliminal messages on a demo of Manson’s music. He then launches into a BANDERSNATCH-tier rant on government conspiracies, which has no purpose in the overall story. Again: why?

Farrands grasps at a coherent theme here and there; firm YOLO statements jump out throughout the film, albeit at forced moments. An early dinner scene makes it a point to give Tate a platform to talk about fate and chance via her discovery as an actress, only after each person goes around the table and tells a quick anecdote or a cheeky quip to let you know their claim to fame so you can match them with their real-life counterpart’s Wiki entry after viewing the film. All except Tate’s dog, Dr. Saperstein. Dr. Saperstein is a gorgeous but doomed plot device, only there to be killed and whose death serves as a poolside springboard for Sharon to wax philosophical about ill-fated fates and “our book” being “written before we’re even born.”  It’s an interesting concept to approach the film from, especially within the context that the Polanski/Tate residence was targeted on that fateful night, not for who lived there, but for the previous resident who Manson believed to still live there, as well as the wealth and success that they represented. The victims were mostly in the wrong place at the wrong time. The story is a ROSEMARY’S BABY-derivative vehicle to explore feminine intuition and the horror of being ignored and dismissed when something is very wrong. It’s a great theme to unpack, but the application in THE HAUNTING OF SHARON TATE is clumsy at best, exploitative at worst. Using one of the most infamous slayings in American history for a community college-level philosophy exercise only works if some sort of creative value is offered in return. Think of HENRY: PORTRAIT OF A SERIAL KILLER, where shying away from the darkness residing within the killer would have actually hurt the story. HAUNTING has the opposite effect: Farrands leans into the ultraviolence without offering a dive into the pathos of those committing it. There is an effort to empower the victims in the third act, but it’s ham-handed and once more: why?

Conceptual misgivings aside, the film must, as Ebert decrees, get its day in court. On a craft level, HAUNTING is a mixed bag. While the cast delivers their lines as best as they can, they can only do so much with the script they’re given. Farrands takes care to endear the audience to the characters by giving them ample time to speak and mark themselves as singular individuals. However, the dialogue is oversaturated with expositional info-dumps that feel foreign to the natural conversations they’re supposed to be having. Each character is assigned a moment to state their full name, what they’re known for (“coffee heiress”; “hairstylist to the stars”), and if they were given more time they’d probably recite ranks and serial numbers as well. Manson’s introduction is familiar to those who have seen THE STRANGERS (itself loosely modeled after the Manson Family murders): he comes to the door asking for someone who doesn’t live there anymore, creeping out Tate but no one else in the house. Fantom’s jarring musical cues that accompany any glimpse of the Manson family would normally be overbearing, but as these moments are specifically from Sharon’s POV, they instead serve as an externalization of her inner dread related to her visions, and thus they are forgiveable. The best thing this film has going for it is two-pronged: The performances of the creepy Manson Girls Sadie (Bella Popa) and Yellow (Fivel Stewart), and the rather impressive late ’60s boho and mod costume designs by Susan Doepner-Senac.

While the concept is a good one (and evergreen in relevance), its proximity to and use of real-life tragedy crosses over into exploitation. The resulting skeeziness dilutes any impact that the feminine intuition angle has. The rest of the Manson films (seriously, there are two more coming out in 2019) coming down the pike this year have yet to be seen, but it’s safe to call THE HAUNTING OF SHARON TATE the most skippable of the bunch.

THE HAUNTING OF SHARON TATE arrives in theaters on April 5th, 2019.