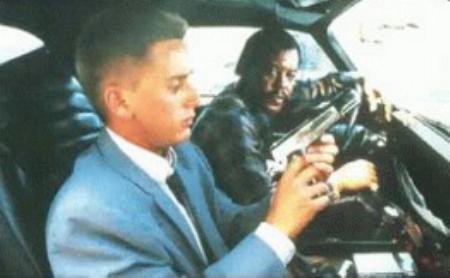 Okay you highfalutin film fans; time to don the monocle and point your pinky finger in the air with a mildly amused look on your face. It’s time once again to jump into the world of Criterion. The classy crew just unleashed the April titles and I like what I see. Along with some well needed Blu-ray upgrades, we have some selections that I am pleased as punch to see get the finest treatment around. Crack open your favorite top shelf spirit and let’s see what’s doin’ under those fancy pants. 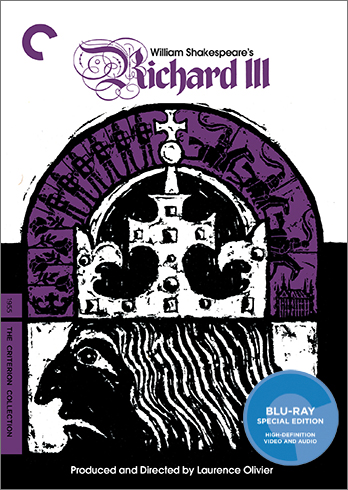 THE SKINNY FROM CRITERION:
With Richard III, director, producer, and star Laurence Olivier brings Shakespeare’s masterpiece of Machiavellian villainy to mesmerizing cinematic life. Olivier is diabolically captivating as Richard, Duke of Gloucester, who, through a set of murderous machinations, steals the crown from his brother Edward. The supporting cast—including Ralph Richardson, John Gielgud, and Claire Bloom—is just as impressive. Filmed in VistaVision and Technicolor, Richard III is one of the most visually inspired of all big-screen Bard adaptations.

SPECIAL FEATURES:
New high-definition digital master of the Film Foundation’s 2012 restoration, with uncompressed monaural soundtrack on the Blu-ray edition
Audio commentary by playwright and stage director Russell Lees and John Wilders, former governor of the Royal Shakespeare Company
Interview with actor Laurence Olivier from a 1966 episode of the BBC series Great Acting, hosted by theater critic Kenneth Tynan
Gallery of behind-the-scenes and production stills and posters, accompanied by excerpts from Olivier’s autobiography, On Acting
Twelve-minute television trailer featuring footage of Olivier, producer Alexander Korda, and other cast and crew from the film
Trailer
PLUS: A booklet featuring an essay by film critic Amy Taubin in the Blu-ray edition

MY TWO CENTS:
Since I haven’t seen it (yes, I can detect your audible gasp), I have no cents to spare. Word on the street though is that this Olivier has some chops. 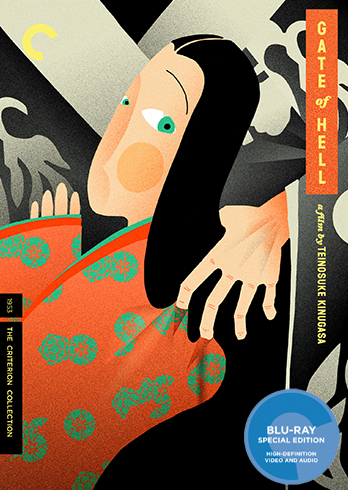 Spine #653
THE SKINNY FROM CRITERION:
A winner of Academy Awards for best foreign-language film and best costume design, Gate of Hell is a visually sumptuous, psychologically penetrating work from Teinosuke Kinugasa. In the midst of epic, violent intrigue in twelfth-century Japan, an imperial warrior falls for a lady-in-waiting; even after he discovers she is married, he goes to extreme lengths to win her love. Kinugasa’s film is an unforgettable, tragic story of obsession and unrequited passion that was an early triumph of color cinematography in Japan.

MY TWO CENTS:
I originally found this film early on in my exploration of chambara. I was in my late teens and this movie is a lot things but it couldn’t be further south from a chambara. Yes, it has battles and swordplay but this film is a visually stunning experience that previously (to my knowledge anyway) has only been available on VHS. This is a bare-bones release from Criterion, but maybe for a film like this that isn’t a bad idea. 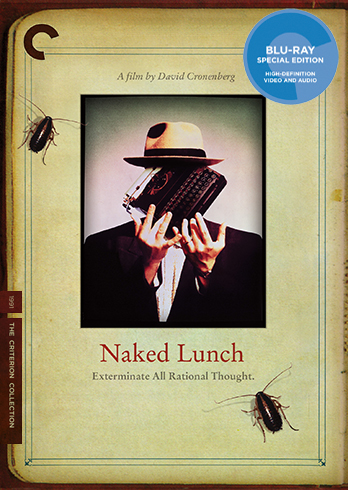 THE SKINNY FROM CRITERION:
In this adaptation of William S. Burroughs’s hallucinatory, once-thought unfilmable novel Naked Lunch, directed by David Cronenberg, a part-time exterminator and full-time drug addict named Bill Lee (Robocop’s Peter Weller) plunges into the nightmarish Interzone, a netherworld of sinister cabals and giant talking bugs. Alternately humorous and grotesque—and always surreal—the film mingles aspects of Burroughs’s novel with incidents from the writer’s own life, resulting in an evocative paranoid fantasy and a self-reflexive investigation into the mysteries of the creative process.

MY TWO CENTS:
I saw this film once and I have yet to revisit it, a rarity for me when it comes to Cronenberg. This is a very dark film filled with some riveting performances. I really like the way that Cronenberg dissects the writing process but the film itself is just coated in sadness that I find it almost a chore to go back to it. Maybe this Blu-ray upgrade is just the fruit I need to sin once again. 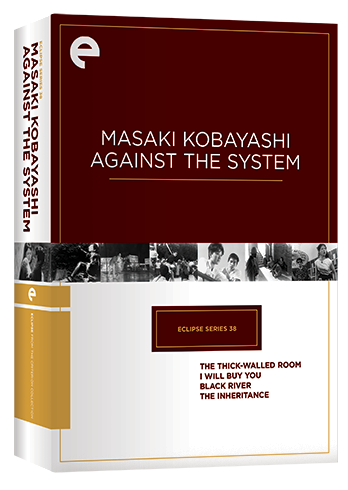 THE SKINNY FROM CRITERION:
One of the most important filmmakers to emerge from Japan’s cinematic golden age, Masaki Kobayashi is best remembered today for his 1959 epic The Human Condition, but that is just one of the blistering films he made in a career dedicated to criticizing his country’s rigid social and political orders. He first found his voice—rebellious, angry, engaged—in the fifties, following his life-altering experiences as a soldier in World War II; the four films collected here, made in the same period as The Human Condition, reflect Kobayashi’s coming into his own as an artist. He fought to get these powerful dramas made at a studio more oriented at the time toward quiet family melodramas; they are unforgettable pictures of a postwar Japan troubled by identity crises and moral corruption on scales both intimate and institutional.

INCLUDES:
THE THICK-WALLED ROOM, I WILL BUY YOU, BLACK RIVER

MY TWO CENTS:
I am intimately familiar with THE HUMAN CONDITION which I watched in a scene for scene dissection back in school but I never went back and watched the rest of his catalog. Still not sure I want to but we’ll see. 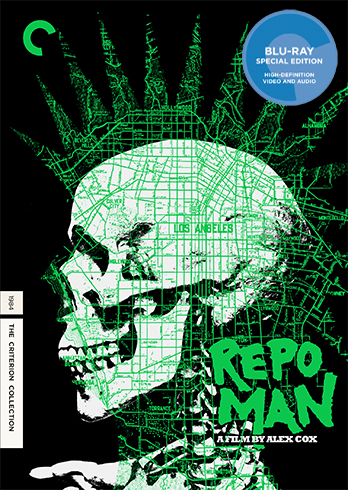 THE SKINNY FROM CRITERION:
A quintessential cult film of the 1980s, Alex Cox’s singular sci-fi comedy stars the always captivating Harry Dean Stanton as a weathered repo man in desolate downtown Los Angeles, and Emilio Estevez as the nihilistic middle-class punk he takes under his wing. The job becomes more than either of them bargained for when they get involved in reclaiming a mysterious—and otherworldly—Chevy Malibu with a hefty reward attached to it. Featuring the ultimate early-eighties L.A. punk soundtrack, this grungily hilarious odyssey is a politically trenchant take on President Reagan’s domestic and foreign policy.

MY TWO CENTS:
A giant middle finger to the 80s at 24 frames per second. Universal Pictures had no idea what the hell this piece of wonderment was so they essentially dumped it in a small number of cities (in part because the soundtrack was so popular) which probably ended up doing the film a favor by giving birth to its cult bona fides. This flick is a classic; it raises the flag of punk and punches the audience with a fistful of attitude and oddity. Alex Cox is a true outlaw filmmaker and this is his masterpiece. Put your seatbelt on, boy. 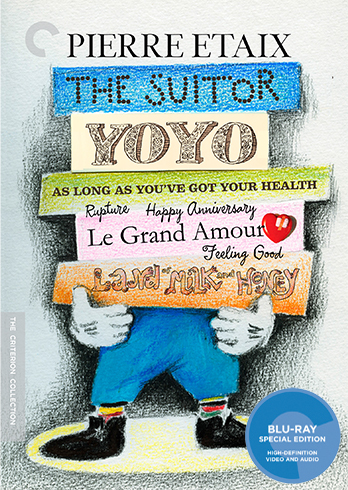 THE SKINNY FROM CRITERION:
A French comedy master whose films went unseen for decades as a result of legal tangles, director-actor Pierre Etaix is a treasure the cinematic world has rediscovered and taken up with relish. His work can be placed in the spectrum of classic physical comedy with that of Jacques Tati and Jerry Lewis, but it also stands alone. These films, influenced by Etaix’s experiences as a circus acrobat and clown and by the silent film comedies he adored, are elegantly deadpan, but as an on-screen presence, Etaix radiates warmth. This collection includes all of his films, including five features, The Suitor (1962), Yoyo (1965), As Long as You’ve Got Your Health (1966), Le grand amour (1969), and Land of Milk and Honey (1971)—most of them collaborations with the great screenwriter Jean-Claude Carrière—and three shorts, Rupture (1961), the Oscar-winning Happy Anniversary (1962), and Feeling Good (1966). Not one of these is anything less than a bracing and witty delight.

INCLUDES:
THE SUITOR, YOYO, AS LONG AS YOU’VE GOT YOUR HEALTH, LE GRAND AMOUR, LAND OF MILK AND HONEY
SPECIAL FEATURES:
New digital restorations of all five features and three short films, with uncompressed monaural soundtracks on the Blu-ray edition
New interview with director Pierre Etaix
New video introductions by Etaix to seven of the films
Pierre Etaix, un destin animé (2010), a portrait of the life and work of the director by his wife, Odile Etaix
New English subtitle translation
PLUS: A booklet featuring an essay by critic David Cairns

MY TWO CENTS:
Yeah, me neither.