Who doesn’t love an advent calendar? Around the Daily Grindhouse virtual offices, we decided the only way to make the advent calendar better is to replace what you might traditionally find behind the door with Christmas horror movies! So everyday from December 1st through to Christmas, we will be highlighting a different movie for our horror-loving readers to celebrate the season. Our film for Day Five is SAINT! 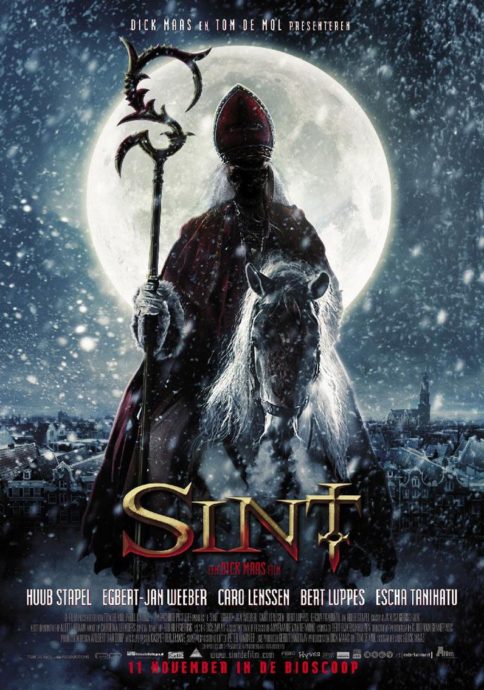 I love filmmaker Dick Maas…at least, I think I do. That qualifier exists because of the twelve features he has directed, I have only seen four—two of which are essentially the same movie. But those four—AMSTERDAMNED, THE LIFT, DOWN, and SAINT—are incredible and have made me a big devotee to continue to search out more of his work. (In fact, if anyone has a line on how to get a copy of his 2016 film PREY, in which a lion escapes the Amsterdam zoo and starts killing people, hit me up on Twitter) I first saw Maas’ work with AMSTERDAMNED on Channel 56 in Massachusetts, all edited for content and awkwardly dubbed, one Saturday afternoon as a kid and was mesmerized. It was a horror action movie that felt…off in a way that was impossible to define and haunted me for years until I could verify that it existed thanks to the Internet (and the recent glorious Blu-ray from Blue Underground).

Like a select few inspired foreign films and a large swath of “So Bad, They’re Good” movies, Maas’ cinematic output feels like someone raised up on Hollywood formulas and understands the basic shape and outline of how a narrative is supposed to come together in standard box office fare. But the devil lies in the details, and he always injects them with random subplots or sudden outbursts of action sequences, and it’s always highly entertaining and unique.

Which leads us to 2010’s SAINT (aka SAINT NICK aka SINT), his Christmas horror/action movie in which Amsterdam is besieged by the undead villainy of the real Saint Nicholas and his band of zombie criminals. In Dutch culture, in addition to their two days of Christmas celebration on the internationally recognized dates, the people also celebrate Saint Nicholas’ birthday where the gaunt man dressed as a red bishop (who is different than Santa Claus in ways that seem ill-defined) and his team of helpers leave presents for all the children. At least, that’s what they’d have you believe. For in truth, the real Saint Nicholas was a horrible pillager and kidnapper and pirate that plagued seaside towns with his rogues and terrorized townspeople. The fifth of December isn’t when Saint Nicholas was born, but when a group of villagers rose up and burned he and his gang alive on their boat. Now they return every 42 years (or when there’s a full moon on December 5th) to kill people and kidnap children and run amuck. It’s up to Detective Goert (Bert Luppes), a man whose family ran afoul of the evil Saint years ago, and bumbling teenager Frank (Egbert Jan Weeber) to save the city and put a stop to Saint Nicholas’ evil ways once and for all.

SAINT is a ton of fun thanks to cool designs, a mischievous mean streak that doesn’t protect characters from falling prey to the villains’ attacks, and a nice mix of the absurd and grounded. As noted, there’s a lot of Hollywood formula in Maas’ movies. In this one, police forces attempt to track down and stop these crimes; but that also involves a spectral horse running on rooftops and burned up zombie helpers scrambling in suburban homes and a hospital. It’s a blast of a movie that feels familiar but is just off enough to lend itself to surprising moments and creative sequences.

If there is an element to the movie that is off-putting, or at least viewers should be made aware of before watching the film, it’s that there are some characters in blackface. In Dutch culture, as noted, Saint Nicholas (who lives in Spain?) has helpers named “Black Peters.” This leads to a lot of lily-white European lads donning blackface and cheap wigs while fulfilling the role as St. Nick’s helpers. It’s not as minstrel-y as it could be (yay…I guess?), but it’s incredibly weird to see and bizarre that this is still a thing in 21st century. And not like it’s a holdout or some people randomly do it here and there—”Zwarte Piet” is still a major part of the December 5 celebrations. That’s weird, Holland; get your shit together. There are only two characters that appear in the film in blackface and it’s not addressed that it is weird or transgressive in any way. But they do meet a grisly end, so there is that at least.

Dick Maas is an incredibly fun filmmaker that takes weird plots that seem like Hollywood blockbusters if you squint at them, and then approaches them with cinematic precision to turn out unique experiences that people should seek out. SAINT is a joyous Christmas melding of action and horror, like THE FOG meets RARE EXPORTS, that should be far more popular and well-known. It’s a great present to give yourself this holiday season, to experience something special and enjoyable. 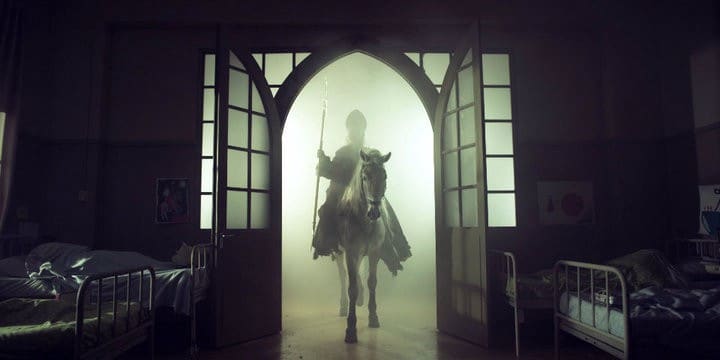