Home  ⁄  The Wire  ⁄  IT’S THE DAILY GRINDHOUSE 2018 HORROR ADVENT CALENDAR! ‘JACK FROST’ IS OUR EIGHTH FILM OF THE MONTH!

Who doesn’t love an advent calendar? Around the Daily Grindhouse virtual offices, we decided the only way to make the advent calendar better is to replace what you might traditionally find behind the door with Christmas horror movies! So everyday from December 1st through to Christmas, we will be highlighting a different movie for our horror-loving readers to celebrate the season. Our film for Day Eight is JACK FROST! 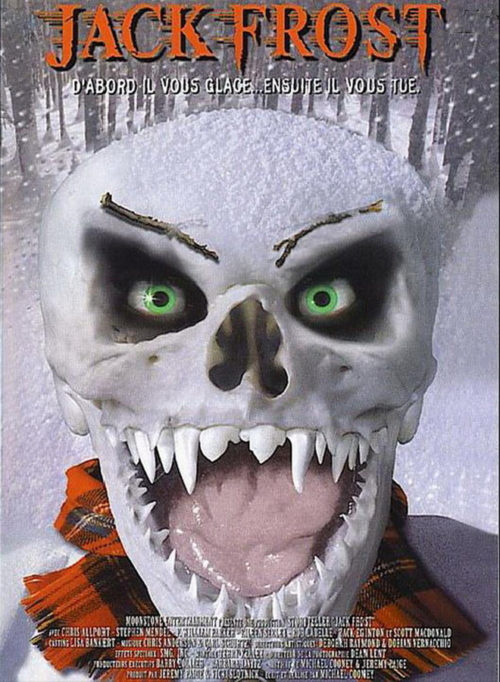 In the jolly village of Snowmonton…

Who went by the name of Frost.

He loved to kill, no matter the cost.

A couple of police officers and a teen boy.

Lots will live, but others will die.

Why he’ll even snuff out that girl from American Pie.

How do they stop old Jack?

How do they prevent him coming back?

He’s so nimble, he’s so quick…

Maybe they’ll use gasoline and ignite a match stick.

To stop him from going on future sprees. 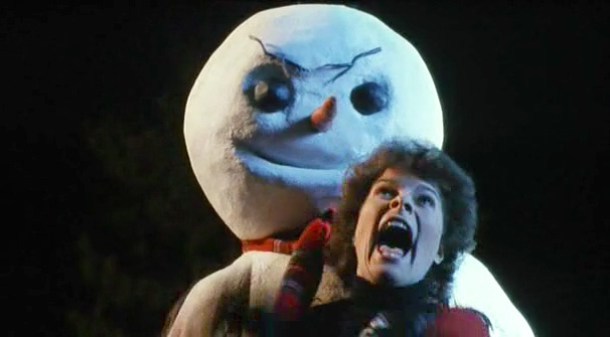 Back in the DTV halcyon days when lenticular VHS covers peppered local mom and pop video store shelves, seemingly every low-budget trash masterpiece was made to birth a new horror icon, ranging from the likes of ICE CREAM MAN to killer kid cheapies like MIKEY and MILO to psycho medical professionals like THE SURGEON and THE DENTIST. Then, you had your monster movie stuff like GRIM, RUMPELSTILTSKIN, and the great green granddaddy LEPRECHAUN. Blowing in on the heels of these other titles like a wicked Nor’easter was 1997’s JACK FROST, the directorial debut of British playwright, Michael Cooney, who, several years later, would pen the underrated IDENTITY.

The key to why something like JACK FROST works as well as it does is because its screenwriters, Cooney and Jeremy Paige, take a silly sounding premise–a Christmas slasher about a serial killer mutating into a snowman who in turn begins picking off the residents of a small, sleepy town–and lock its hero and villain into a story with personal stakes. The titular Jack Frost (Scott MacDonald) was a serial killer–whose misdeeds are hilariously relayed to a little girl via an inappropriate Christmas poem over the opening credits–who got caught by our hero, Sheriff Sam Tiler (Christopher Allport) while in the midst of a violent killing spree and promised that, no matter what, he would get his revenge on the lawman. During Frost’s transfer to be executed, his transport collides with a truck hauling chemicals that explode forth, showering dear old Jack with DNA altering goo, simultaneously Jason Takes Manhattaning him and turning him into a slashing and slaying snowman. I’ve always loved horror films where a serial killer comes back from the dead to seek revenge on the cop who put him away, and there’s a metric ton of those, but none have the gimmick that this one does and go a step further to execute it in a fashion that’s particularly admirable. 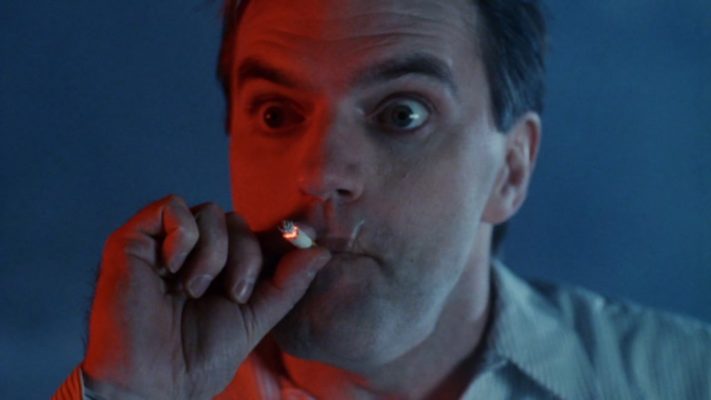 The writers sprinkle humor throughout the film, some of it–Frost’s Freddy-esque one-liners–come off a little too goofy, but the dry wit courtesy of its game cast (who know exactly what kind of film they’re making) works fairly well, namely in the FBI agent (Stephen Mendel) who comes to wipe Frost off the map once and for all. There’s also the editing that crackles with a fast comedic beat (the way the film slows the action down for the inciting traffic accident, and then speeds up to show the chaos that’s happening). My favorite little gag is the scene where Sheriff Sam shows up at the police station and has a one-sided conversation with his perma-coiffed receptionist, and asks “Did someone die?” to which she responds wordlessly with a memo that says “SOMEONE DIED.” I love when there’s good comedic timing afoot in a horror-comedy and JACK FROST has some endearing humor in its bones.

Par for the course with a slasher film, there are some neat spikes of suspense, lots of POV shots of Jack surveilling his prey, and to the film’s credit, it has an admirable body count to keep viewers engaged. Not to mention that the characters are a little more intelligent than the usual bodies that populate these films; they constantly keep devising ways to end Frost’s reign of terror during the film’s second and third acts. Frost himself, prior to chilling out, is a nicely sinister villain. This gives the film a mean tone, though not as overtly mean as say, SILENT NIGHT, DEADLY NIGHT. But the less said about the ghoulish rape scene in the film’s second act, the better. It’s an absolute misfire and so out of place for a film that’s out to give you some laughs alongside its chills. There are some other elements in the film that fall flat, like the messy tone that permeates the murder scenes–for example, the cartoonish way that Jack knocks off the mother of a kid he’d killed earlier (the teen decapitated with a sled), it’s grisly enough without the unnecessary silly camera work (the fucking zoom-ins!) and sound effects muting its impact, though fortunately, it’s not enough to tank the film. 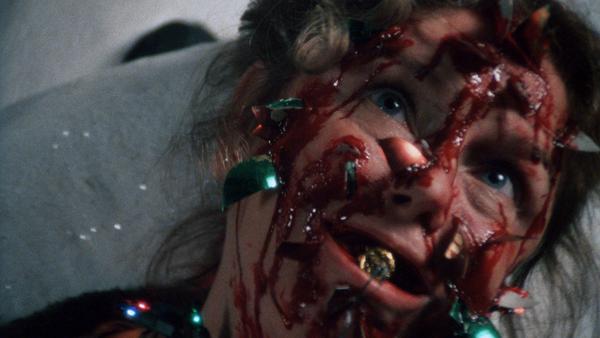 The third act tries to introduce some gonzo plot about Jack’s soul and the usual sci-fi gobbledygook that goes absolutely nowhere and means even less to the people watching it. That’s probably a good note going forward for writers, teaching them that if we can buy a killer returning from the dead and transforming into a snowman, you don’t have to fluff it up with a scientific, existential explanation that sounds like season three Chris Carter-penned dialogue on The X-Files. Just go with it, because the monologue offered up by the Burke-lite agent just went in one ear and out the other. It also takes one too many times for them to finally eradicate Jack, three turns at bat, by my count, and in turn, gives us the strangest way that a hero learns how to eliminate a film’s villain–because his son tried to poison his food. There’s also not too many films that end with a main character baptizing his child in a truck bed full of anti-freeze, so JACK FROST has all other competitors beat in that regard.

There’s an effortless charm in JACK FROST. It’s a cozy, Christmas horror film that works its way into your heart. You may think that it’s bad based on the premise alone, and you may be right. But I found something wholesome buried beneath its layers of ice, from the chintzy metal covers of classic Christmas songs to the seriously low-budget efforts behind the camera (the film was shot on short ends and made for practically peanuts). But none of these things are faults by any stretch of the imagination. No one will ever accuse the film of being a frightening experience, but it is certainly an enjoyable way to spend less than ninety minutes.

JACK FROST is available now on Blu-ray from Vinegar Syndrome. 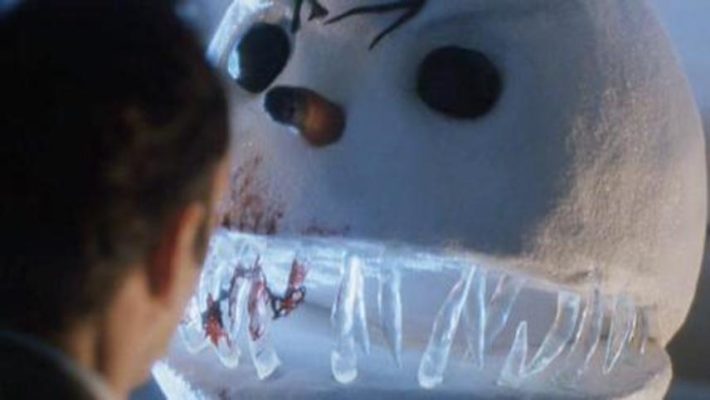