Home  ⁄  The Wire  ⁄  Chicago’s HotLips Messiah Get “S.C.U.M-y” In This Exclusive New Video

It’s been a long time coming, but Chicago punk rock outfit HotLips Messiah will be unleashing their follow up to 2009’s Mutant’s Unite!, titled Disco Miscarriage, on October 25th. “(Theme From) S.C.U.M” is the lead single from the record and Daily Grindhouse has the exclusive premiere. Shot by Chris Peters & Matt Adema and edited by lead singer Traci Trouble, “(Theme From) S.C.U.M” has the band engaging in the sort of bad behavior that these punk rock troublemakers excel at.

Disco Miscarriage is a massive, double LP featuring 46 brand new tunes, glow-in-the-dark artwork from Matt Greer, and an ultracool blacklight poster featuring artwork from Mac Blackout. You’re certainly getting your money’s worth out of this wild package, so skip the streaming service and make sure to add this one to your collection. The album will be available at all the coolest record stores in the Chicagoland area. 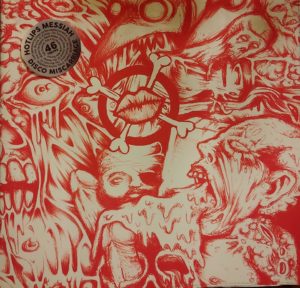 HotLips Messiah features Traci Trouble, Richard Bastard, The Reverend Infectious Rex, fred249x, and Larry Ohler. The latest record features guest vocals from members of Chicago punk rock luminaries Naked Raygun, The Bollweevils, Tutu & The Pirates, The Hamburglars, and even Daily Grindhouse’s own, Jeremy Lowe aka Germ T. Ripper. HotLips certainly has some grindhouse pedigree, you can check out their ode to PHANTASM from our week long celebration of the Don Coscarelli classic.

To celebrate the the album, Hotlips Messiah will be hosting a record release party and show at Cigars And Stripes (6715 Ogden Avenue) in beautiful downtown Berwyn (Berwyn!), Illinois.